What's a learning curve and why is steep not hard?

As to the why-ness of this question:

It's a curve of time versus proficiency.

"steep learning curve" is a buzz-phrase that doesn't have any actual meaning. It used to mean that you'd make quick progress. "Over time, the misapprehension has emerged that a "steep" learning curve means that something requires a great deal of effort to learn..."

Conclusion: people who use the phrase don't know that it's unclear. You should get details from them on what specific things are hard to learn and get past the buzz-phrases and platitudes. 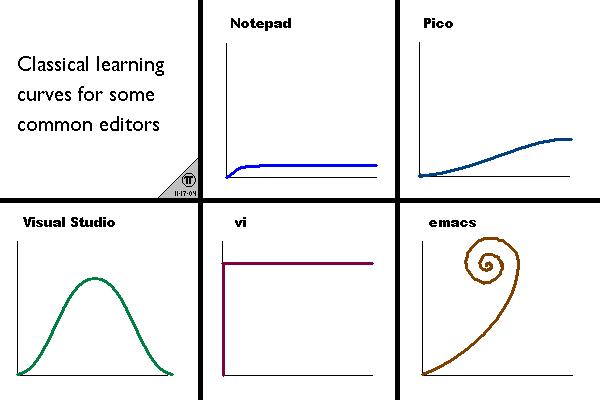 This (very unserious) diagram subscribes to the steep == "hard to climb" interpretation, for anyone keeping score. Emacs. So true. ;-)

More material in the same amount of time would produce the same curve.

The term learning curve refers to the graphical relation between the amount of learning and the time it takes to learn.

The term "steep learning curve" is often wrongly used for things which need some time to wrap ones mind around. Also here on Stack Overflow I've seen it used wrongly many times and hence this Question and my own answer to it.

In fact a steep learning curve is given, when it is relatively easy to start of with a new skill/technique/...

it means that the relationship between "learning progress (y)" and "time invested (x)" is greater than 1.

I think that "steep=hard to climb" will win, because it appeals to anyone who at any point in their life has climbed a stair, as opposed to the x-y curve which even people trained in mathematics sometimes mix up.

There are a few possible interpretation of "learning curve", but a fairly natural one would be "time elapsed" on the X axis and "knowledge gained" on the Y axis. A steep curve, in that mapping, would imply that you gain a lot of knowledge, fast.

The only interpretation I can think of where "steep" is the same as "hard" is where you map "knowledge gained" on the X axis and "effort expended" on the Y axis and that is not a very natural mapping.

A "learning curve" originally had total elapsed time [or total cumulative units manufactured/learned] on the X axis and the time required to produce/learn a single unit on the y axis. Your first unit always takes more time than the 100th or 1,000th. The "steepness" of the curve depends on how fast you get good at producing/learning a thing. Learn quickly and you have a "steep" curve; slowly and you have a flat curve.

I agree that the uninformed have morphed the original meaning of the term, but to be accurate steep is easy. People get upset because those of us who paid attention to using language correctly in school rarely get to take part in this type of evolution.

The acquisition of knowledge does not always imply understanding. In some cases a developer may not need to absorb a lot of system detail but may need to understand underlying designs before they can be productive. This can take time but does not imply a steep learning curve.

In practise understanding and knowledge go hand in hand. Most developers will always be on a learning curve of some sort but will also be using new knowledge to forge a deeper understanding of the systems they are working as well as the tools and practises they are using.

This is how languages evolve, and it would be utterly futile to try and change the general usage of this term now. And, in any event, I could care less about the whole issue (see how you still knew exactly what I meant?).

Level of difficulty is not a factor. A learning curve depicts the length of time to acquire a proficient skill set or high level of comprehension. The description will vary based on the test subject that the curve is applied to. While one can certainly say that the learning curve for acquiring proficiency of an application such as MS Notepad would be steep, another application for the curve would be the length of time individual test subject take to acquire such proficiency. The learning curve for acquiring proficiency of MS Notepad is generally steep, but it may be steeper for Mary than it is for John.

Not the answer you're looking for? Browse other questions tagged taxonomy or ask your own question.

2
What enterprise-class open source CMS has the steepest (easiest) learning curve for a programmers team?
3
Should we use Jade or React as view engine in expressjs

1
Custom taxonomy list with children and post included, not working
0
/page/2 (pagination) while listing taxonomy terms (and not on a taxonomy page)
0
Why my taxonomies are not working the hierarchal way on my custom posts?
0
I am trying to add category to a custom post but does not work. Why?
4
WordPress Taxonomy Term meta not working with export and import
2
Display product subcategories (not parent categories) and products on shop page
1
I created cpt in WP and did not show the taxonomy, what did I do wrong?
1
Why does col_search sometimes work and sometimes not, in funtion or not
0
Ordering results of WP Query not working for orderby and order parameters