SVG Fill not being applied in FireFox

I can't seem to figure out why Firefox is using the default svg fill color instead of the class's fill.

Here are the 3 fills when viewing the FF inspector: 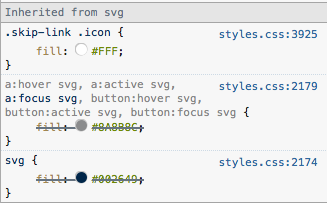 SVG is being inserted via

It should be showing the .skip-link .icon fill of white (#fff) but it's actually using the SVG fill of #002649; If i change .skip-link .icon to .skip-link svg then it works fine. Why can I not use a class and instead but explicitly state the element??

Am I missing something obvious about how Firefox fills an SVG? This CSS works fine in other browsers.

If the behavior was unique to Firefox prior to version 56, it was because #menu-bag refers to a <symbol> element.

The specs say that a re-used <symbol> should be implemented as if it were replaced by a nested <svg>. Firefox used to treat this literally in their shadow DOM. The shadow DOM isn't visible in your DOM inspector, but it is subject to CSS selectors.

Which means that this code:

The svg.icon matches your .skip-link .icon rule (and as Kyle Mitt points out, that rule will always take precedence over your a:hover svg rule). This value is also inherited by the <use> element.

However, the shadow-DOM <svg> doesn't get the inherited value, because it is styled directly with the svg rule. When you change your selector to .skip-link svg, or when you trigger the a:hover svg rule, then the hidden inner element gets the style directly applied because that SVG is also a descendent of the link.

As Robert Longson noted in the comments, this is not how it is supposed to work. It's a side effect of the way that Firefox implemented <use> elements as complete cloned DOM trees, which just happened to be hidden from your DOM inspector.

Here's a "working" example of your original problem. Which is to say, on Chrome, Safari, Opera, Firefox 56+ or IE you will see a green circle that isn't altered when you hover it, but on Firefox prior to version 56 you will see a blue circle that turns red on hover/focus.

So what to do you if you need to support old versions of Firefox? You have two options, one of which you've already figured out by trial and error:

One option would be to use a rule like the following, which would maintain the specificity of your original rule for other browsers:

The use>svg selector will never match anything except with the Firefox bug, so it is safe to use without side effects. (Originally, I'd just suggested adding svg to the end of the selector, but that could be problematic in certain situations.)

A more universal option based on the answer @AmeliaBR provided, is to simply do something along the lines of:

which will make the shadow element inherit the fill color.

Robert is correct that <use> is not always applied consistently. Certainly when you use an SVG as an image, it doesn't know how to apply any of the CSS rules you've added to your page.

But there are a lot of other things here as well that could decide the element's style so an example might be helpful.

Here's a stack snippet to center our discussion.

The SVG element itself is being styled with several conflicting rules. What determines which rule wins has to do with [specificity and order]. In this case, the SVG element itself will end up purple. The hover anchor rule, for example, will never show up because it is less specific than .skip-link .icon 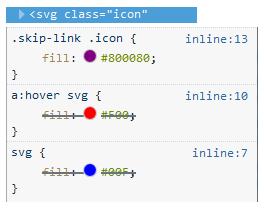 Some properties allow for inheritance from their parents, but only when not specified themselves. Any specifications will override the inherited value. If the question is, my <svg> element has a certain style, why isn't it being applied to all child elements equally, the answer is simple. It's perfectly fine for child elements to specify their own value and override the inherited one.

The tricky part becomes what happens when use is involved. In this case, it can be hard to trace the actual styles being applied. Use will create an inline representation of the element identified by the xlink attribute, but you cannot access this element directly. Therefore, selecting use in the developer tools will only reveal the styles applied to the parent of the element. The element itself may override the inherited properties and we'd have no way of observing it in the dev panel.

Here, for example, the style applied to use is inherited from the parent. In the developer tools, it appears that the winning rule is purple, but this is only because it hasn't taken into consideration the element being pulled in. This is a soft value that can be overridden if the element specifies any value. 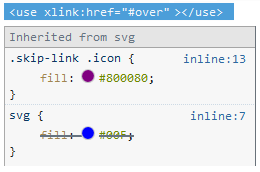 But the full set of selectors for the inlined text would actually look like this: 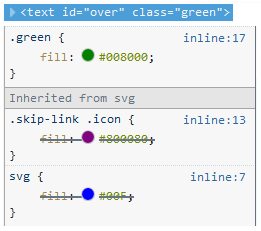 One thing I'd suggest in the future is providing runnable code that other people can use to easily reproduce the issue as it saves a lot of extra debugging time. However, here's what I suspect is happening with your exact situation:

Set your default svg fill color on the body or html tag and it will be inherited as a default, but you can easily override it using just a class.

My case is not exactly the same, but I share it anyway. I´m using svg as a background image, like the example below (googled for it, don´t remember where). And in Firefox had problems with the "fill" color.

Not the answer you're looking for? Browse other questions tagged css firefox svg or ask your own question.

2074
Make a div fill the height of the remaining screen space
636
Targeting only Firefox with CSS
3
XPointers in SVG
1118
How to manually send HTTP POST requests from Firefox or Chrome browser?
1192
What is the best way to conditionally apply a class?
2886
Is it possible to apply CSS to half of a character?
1
svg xlinks not working as svg object in html
0
JSF - SVG doesn't align inside panelGrid
1
JavaScript : NameSpace of a specific attribute?
0
imagemagick - convert does not work with use xlink:href in SVG - possible?