But today I saw a notification on VisualStudio 2013 community IDE prompting me to update the trial license. Is this a bug?

Have you signed in to Community? Mean in your editor aswell on the homepage if necessary.

Actually there is a dirty work around without signing-in , I used a free tool called RunAsDate from this link http://www.nirsoft.net/utils/run_as_date.html and set the date in the tool to the installation date. So the license never expires .

Some context (I doubt that it makes any difference, but still):

I've Googled and found smth similar on [Unity.Forum]: Visual Studio Community 2015 - License has expired ?! (with a nice pic and stuff), which pointed out to: [MS.DevBlogs]: Visual Studio 2015 FAQ - Community Edition is telling me my trial has expired. Do I have to pay for Community edition?:

No, Community edition is free to use. We use the same infrastructure that allows you to unlock VS w/ an online subscription to manage the requirement of signing into Community edition so some of our strings overlap cross these scenarios. Trial here means the period you can use the community edition before you must sign in to fully unlock the IDE.

So, after signing in (it's a simple email address/password sign in to MS), the IDE was unlocked. Staying signed in is not mandatory, I signed out, and the IDE still works.

Today (180821), my VStudio license expired again for all 3 Community editions that I have installed.

Below, it's the VStudio 2015 locked version: 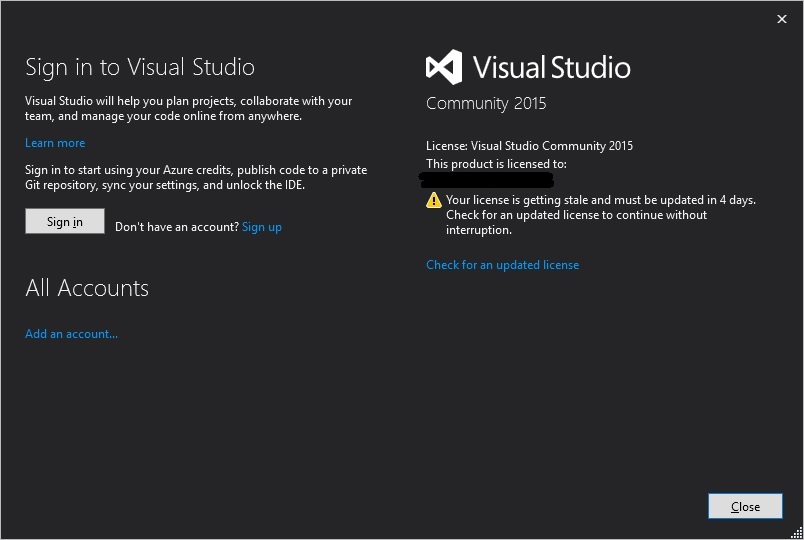 After signing in ([MS.Docs]: Sign in to Visual Studio), and optionally clicking "Check for an updated license", everything went back to normal.
Posting some examples:

I had the same issue. I signed out of visual studio, and restarted my PC. That solved the issue. Hope this helps

I faced the same problem today with Visual Studio Community 2019. The warning disappeared after logout and login again from my Visual Studio account and restart it. 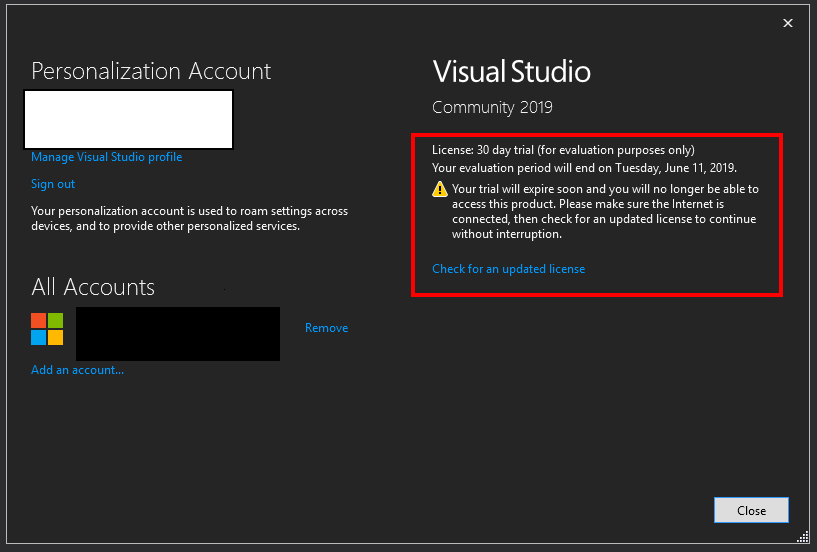 Not the answer you're looking for? Browse other questions tagged visual-studio visual-studio-2013 or ask your own question.

338
Is Visual Studio Community a 30 day trial?
3
Visual Studio 2013 Community Edition - "Your license has expired." even though it's a release (Update 4)