Make sure all *.cshtml files are set to be “Content” for Build Action

A few times when I copy-paste *.cshtml files, Visual Studio for some reason sets Build Action on these files to be "None":

This is impossible to detect when you work locally, because the files are present. But when you deploy through WebDeploy, files marked as "None" on Build Action are not packaged. As a result I get non-working application on the server.

Question: is there a way to automatically detect such occurrences and prevent?

You could extend the .csproj with a small snippet that will generate a warning when an item in the "None" group has the extension .cshtml. The snippet would be:

If you see other build actions (like EmbeddedResource), you can add them to the Filtered item definition.

If you want more advanced detection you need to actually parse the project files for any item that fits this Xpath //ItemGroup/*[not(self::Content)]/@Include

You'll need to manually put one of these snippets in your project file: 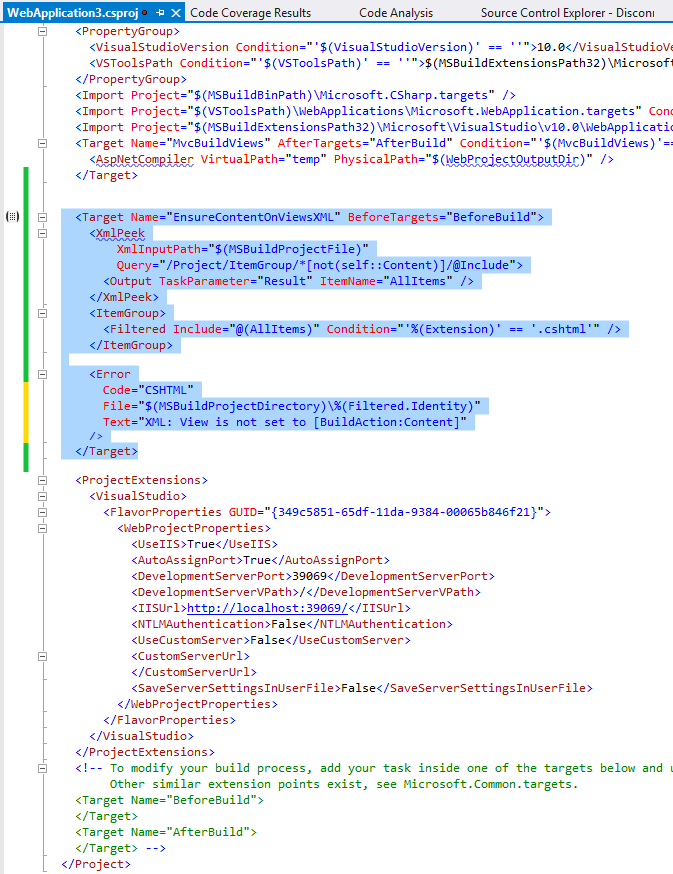 Thank you jessehouwing for geting me started! I liked your solution and voted for it. I had a little trouble with it and ended up with the following:

Right before my </Project> tag in the csproj file.

Well, @jessehouwing 's certainly worked for me! So that fix stays nicely in my .csproj file :).... Only, I just double-checked and it looks as if that nice snippet disappeared somewhere in the last month due to a merge of another developer or something.. (true story)

Anyway, I would like to mention the NPM module check-vs-includes I created for this. It is especially convenient for dev's that have Node installed (and if you don't then you probably should :) ).

I run the check manually before each deploy, instead of on every build. But it is less likely to disappear (unnoticed) from your .csproj file due to a merge.

The main advantage however of using this NPM package, is that besides checking for Build Action NONE it also checks for files that are NOT included in your project at all. Because that can also lead to (subtle but nasty) bugs when you use Visual Studio's Web Deploy. And missing includes are actually pretty likely if: 1) you have 1 non VS developers in your team, or 2) due to merges of the .csproj file (which often has merge issues).

Check the NPM page for instructions. But below a simple example, which assumes you use Node and Gulp:

I suggest to implement a custom build task. Call it on prebuild in your msbuild/tfs script. Custom build task should just check .scproj file if there is an include file of cshtml with build action none. Of so just exit returning a non zero int value.

Not the answer you're looking for? Browse other questions tagged razor visual-studio-2013 msbuild asp.net-mvc-5 webdeploy or ask your own question.

156
What is the best practice for “Copy Local” and with project references?
4
Any issues setting MVC 3 rc1 Razor cshtml file Build Action to Compile?
7
MSBuild targets and Visual Studio 2012 issues
0
Use MSDeploy to copy buildresult to targetserver
0
How Do I Make a VS2013 SQL Script Item Template With Default Build Action = None
2
Webdeploy not publishing App_GlobalResources folder with resource files
0
VS2015 Azure Resource Manager deploy dialog ignores solution and project build configuration for referenced projects
3
Visual Studio copies dll files which are set to “Do not copy”
1
How do I prevent Visual Studio 2017 build from duplicating content files in output directory on build?