This question was cleaned up and the important info moved to the answer below.

I have some questions about memory management.

I am building a photo editing app. So keeping memory usage low is important. Also I am not going to post code because I do not have a big memory leak when doing one specific thing. I just lose a couple of KB's/MB's with everything that happens. And going over tens of thousands of lines of code to find kilobytes is no fun ;)

my app uses core data, lots of cifilter stuff, location, and the basics.

My first view is just a tableview which costs me about 5mb of memory. Then you take some photos, apply some filters, this gets saved to core data and then you go back to that first view.

Is it possible to truly get rid of everything in memory except for the data needed to drive that first view. (that very save and awesome 5mb)

Or will there always be something left behind, even if you set everything to nil?

Bonus Question: is there a difference in file size / cpu load between UIImageJPEGRepresentation and UIImagePNGRepresentation? I know you can set a compression quality with the JPEG method (harder on the cpu/gpu?).

Just trying to reduce memory pressure by all means possible.

It was pointed out to me that the question might be too vague.

The problems I was having at some point or another were the following:

P.s this was all tested on an iPhone 4s , not the simulator.

There was a meme here to lighten the mood on this site a bit.

This question has been open long enough and I now feel confident enough to answer it.

In Swift with ARC we have no way to clean up the actual hardware ram. We can only make it possible for the OS to do that for us. One part is using the right code (optionals and weak) the other part is creating time for the OS to do it's job.

Imagine we have a function that runs on all threads indefinitely. It does one thing, load an image, convert to black/white and save. All images max at a couple of mb’s and the function creates no Software Memory Leaks. Because images don’t have a set size and might have different compression they don’t have the same footprint. This function will always crash your app.

This “Hardware” Memory Leak is caused by the function always taking the next available slot of memory.

The OS does not step in to “actually clean the memory” because there is no idle time. Putting a delay between each pass completely fixes this.

Some operations don’t have an impact on memory, others do:

Both have their advantages and their dangers.

Structs are memory intensive because they are Value Types. This means they copy their values when assigned to another instance, effectively doubling memory usage. There is no fix / work around for this. It is what makes Structs Structs.

When the counter hits 0 the object is deinitialised.

There is a way to prevent an instance from deinitialising, and thus creating a leak. This is called a Strong Reference Cycle.

set one reference to weak

Functions capture the values passed to them. But it is also possible to mark those values as inout. This allows you to change a Struct passed to a function without copying the Struct. This might save memory, depending on what you pass and what you do in the function.

It is also a nice way of having multiple return values without using tuples.

State is Value over Time

More on this here

Object Oriented programming uses Objects that have changing/mutating states. Instead of creating a new value, the old values are updated.

Functional Programming can use more memory.

Optionals allow you to set thing to nil. This will lower the reference count of Classes or deinitialise Structs. Setting things to nil is the easiest way to clean up memory. This goes hand in hand with ARC. Once you have set all references of a Class to nil it will deinit and free up memory.

If you don’t create an instance as an optional, the data will remain in memory until the enclosing function ends or the enclosing class deinits. You might not know when this will happen. Optionals give you control over what stays alive for how long.

Many "memory leaks" are cause by Frameworks that have a “clean up” function that you might not have called. A good example is UIGraphicsEndImageContext() The Context will stay in memory until this function is called. It does not clean up when the function that created the context ends, or when the image involved is set to nil.

Another good example is dismissing ViewControllers. It might make sense to segue to one VC and then segue back, but the segue actually creates a VC. A segue back does not destroy a VC. Call dismissViewControllerAnimated() to remove it from memory.

Read the Class References and double check there are no “clean up” functions.

If you do need Instruments to find a leak, check out the other answer on this question.

click on your apps name in the top-right corner of Xcode.

click on 'edit scheme' in the menu that pops up. 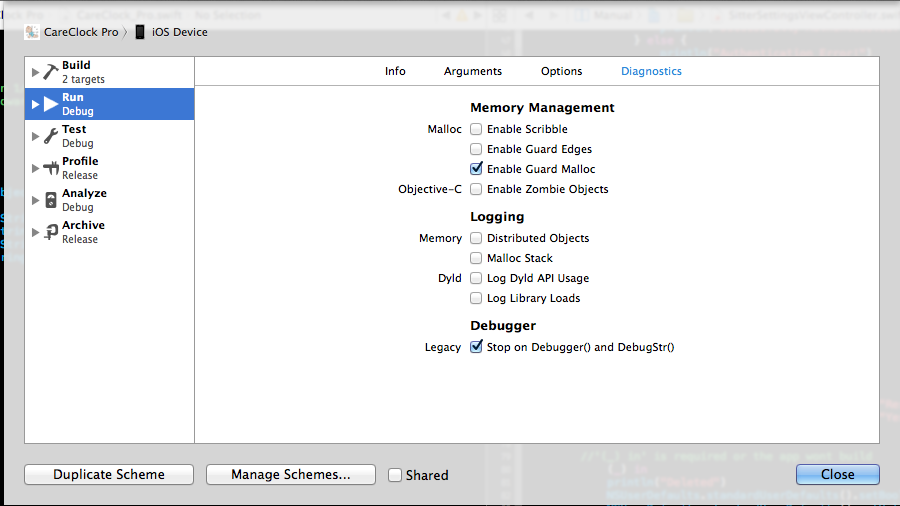 make sure 'RUN' is selected on the left side, then click the diagnostics tab near the top of the window.

under the 'memory management' header check the 'enable Guard Malloc'

more info on guard malloc, guard edges and scribble can be found here.

64
Xcode - scribble, guard edges and guard malloc
2
How to clear SKSpriteNodes from memory?
4
How do I correctly release memory in Swift?
2
App crashes on iOS device due to memory warning (Swift/Xcode)
0
Is there a way to deallocate a page in uipageviewcontroller after being swiped in swift ios?

830
How do I discover memory usage of my application in Android?
1145
Can a local variable's memory be accessed outside its scope?
1115
How do I call Objective-C code from Swift?
857
#ifdef replacement in the Swift language
1010
#pragma mark in Swift?
929
How to iterate a loop with index and element in Swift
975
Swift Beta performance: sorting arrays
502
Shall we always use [unowned self] inside closure in Swift
801
Split a String into an array in Swift?