c# Environment.ProcessorCount does not always return the full number of Logical Processor, why?

Why on Windows Server 2012 c# method Environment.ProcessorCount does not return the proper number of logical processors?

As Additional information, environment variables are as follows: NUMBER_OF_PROCESSORS=28 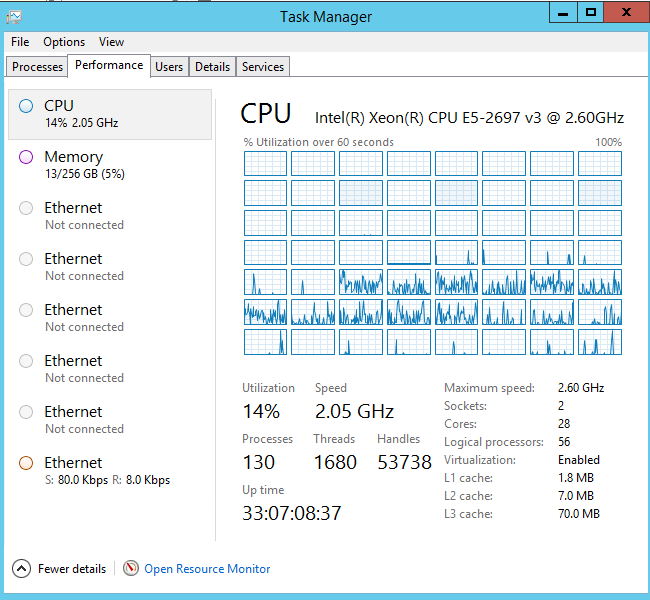 There is a more details/reasons of this related bug in my other question: Unable to use more than one processor group for my threads in a C# app. Mainly I think that C# does only use one processor group. What's werid was that on our server, there was 2 processor groups although there was only 56 logical processors. But this HP CUSTOMER ADVISORY explain why our server bios configuration were inducing windows in error.

There may be a hint in the docs:

"If the current machine contains multiple processor groups, this property returns the number of logical processors that are available for use by the common language runtime (CLR)."

Could that be the issue here?

Found something else interesting:

By default, the pool is restricted to a single processor group (http://msdn.microsoft.com/en-us/library/windows/desktop/dd405503(v=vs.85).aspx), and thus to 64 cores. However, in .NET 4.5 you can set the Thread_UseAllCpuGroups enabled="true" flag.

According to the MSDN docs on <Thread_UseAllCpuGroups> you need to set up the following to have all the CPU groups seen and used:

Not the answer you're looking for? Browse other questions tagged c# cpu server core hyperthreading or ask your own question.

338
How to find the Number of CPU Cores via .NET/C#?
28
Detecting the number of processors
40
Unable to use more than one processor group for my threads in a C# app
0
Deciding MaxDegreeOfParallelism based on number of cores
0
A multi-threaded software(PFC3D-to do simulation) not using all the available cores
0
Is PLINQ limited a one NUMA Node? Or: Am I affected by HP Gen9 c04650594?

51
How to Detect the Number of Physical Processors / Cores on Windows, Mac and Linux
2
How will applications be scheduled on hyper-threading enabled multi-core machines?
6
Using CPUID to detect CPU specs, reliable solution?
0
Disable Hyperthreading online
7
How to regard Hyper-Threading when deciding thread pool size?
3
How to determine the optimal number of java threads when using a hyperthreaded multi core CPU
3
Windows environment variable NUMBER_OF_PROCESSORS shows different value within JVM and outside