Is it possible to make realistic n-body solar system simulation in matter of size and mass?

Important note: this question has utterly no relation to "PhysX", which is a computer-game-physics system (useful for the physics in arcade games such as ball games, etc); PhysX is a system built-in to Unity3D and other game engines; PhysX is totally irrelevant here.

I have been logging the values and searching where the exact problem is, and i think i found it. I have something like this in my code

I don't know if it's exactly unity's problem or c#'s float.

And that's why i can't make it work with small values. If i can overcome this, my problem will be solved.

i have been develeping n-body phyics to simulate our solar system, so i have been gathering data around to make it as realistic as possible. But there is a problem with the data size. I searched every tiny bit of internet and i couldn't find a single explanation how people overcomes this. (If they so) So i trying my shot here.

So, to keep the ratio of distance, radius and "mass" between planets fixed, i created an excel file to calculate all the datas. (Because why the heck would someone put "what would be the earth's mass if it had "that" radius chart" on the internet?) I will give the ss as attachment. It basicly "normalizes" or in other words "scales" every property of a planet to a given reference. In this case, i took the reference as "earth's radius."

I work in unity, and you know, you can't work with "too big" or "too small" values in unity. So i had to scale the solar system down, "a lot!"

So i use the Newton's law of universal gravitation, which is F = GMm/r^2, to make it simple, i am directly calculating the a = GM/r^2, for a given body from all other bodies.

So i said, let the earth's radius be 1, in unity units. So, when the radius changes, everything changes, the mass, the distance... I kept the density of the planet and calculate the mass from the new volume with the new radius. All the calculations are in the attachment.

So the thing is, when i take the earth's radius as 1, the gravitational accelaration towards sun becomes is something like 0,0000000000009 which is ridiculously small. And of course Unity doesn't work with that value.

So, if i increase the earth's radius instead, then the mass and radius of the Sun gets ridiculously big and then again, i can't work with it.

I don't know how other people fixed this, what they did to overcome this problem but as i see from here, it looks impossible to make realistic n-body simulation of solar system. (in unity atleast)

So i need to have 10 rep to post images -_-, i will give link instead. http://berkaydursun.com/solar_system_simulator/data.PNG Also one directory up is the working experimental solar system simulation with n-body calculations but with UNREALISTIC values. It works quite well, and it even looks somehow close to real, but no, it doesn't have the right ratios ^^ You can test it here if you wish http://berkaydursun.com/solar_system_simulator/

Edit: WoW I almost started every paragraph with "So" ^^

I did program sol system simulation too so here are mine insights:

The problem is when you are adding very small and very big value then they are shifted to the same exponent before addition which will round off significant data To avoid this just change it to this:

The rounding is still there but it is not cumulative anymore. You have to select max value that the integration itself is safe and also the addition xxx0+xxx1 have to be safe. So if the numbers are too different for one spliting then split twice or more ...

This however does not fully use the dynamic range of added variables to their full potential. There are alternatives that does it like this:

The basic problem with iterative integration is that applaying gravity based acceleration based on current body position will result in bigger orbits because durring integration step dt the position changes a bit which is not accounted in the naive integration. To remedy this take a look at this picture: 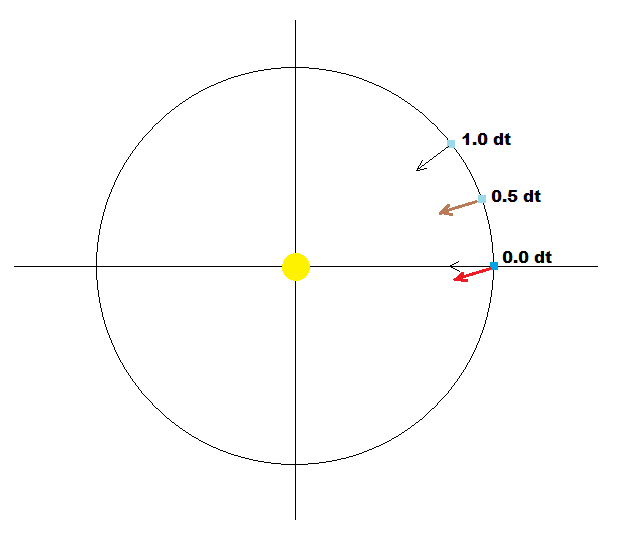 Let assume our body is at circular orbit and in the 0 deg position. Instead of using acceleration direction based on current position I used position after 0.5*dt. This augment the acceleration small bit resulting in much much higher precision (correspondence to Kepler orbits). With this tweak I was able to successfully convert from Kepler orbit into Newton D'Alembert for 2 body system. (doing this for n-body is the next step). Of coarse correlating with real data from our solar system is only possible for 2 body system not affected by tidal effects and or moons. To construct own fictional data you can use Kepler circular orbit and contripedal force equalizing gravity:

where a is the circular orbit radius m is body mass , M is focal body mass (sun). To maintain precision in acceptable tolerance (for me) the integration step dt should be:

So to put new body for testing just put it at:

While main focal body (Sun) is at:

This will place your body in circular orbit so you can compare Kepler versus Newton D'Alembert to evaluate precision of your simulation.

Scaling things down will not necessarily help, as you have discovered. Here is some good reading on things to consider when using floating point numbers: http://docs.oracle.com/cd/E19957-01/806-3568/ncg_goldberg.html

Basically doing a simulation from first principles (Newton's laws) is bad for numerical accuracy, because you don't imbue the numerical methods with an idea of the scale of important effects, so you end up throwing a whole bunch of different effects at different scales together and the result is low accuracy.

Usually things like ephemerides for planets, satellites etc don't start with Newton's law, They start by assuming that the orbits are keplerian, then and small perturbative corrections.

Here is an algo that calculate the position of the planets (semi-imperically). http://ssd.jpl.nasa.gov/txt/aprx_pos_planets.pdf

If you want to do an N-body simulation you it seems like will need more precision. If unity prevents you from using double precision, then I suggest doing the calculations in plain C#, then convert to single precision when the job is done.

Not the answer you're looking for? Browse other questions tagged simulation game-physics physics orbital-mechanics or ask your own question.

28
What are some algorithms that will allow me to simulate planetary physics?
24
Star B-V color index to apparent RGB color
22
How can I render an 'atmosphere' over a rendering of the Earth in Three.js?
8
Why don't people use tetrahedrons for skyboxes?
7
Solving Kepler's Equation computationally
6
Is fixed point math faster than floating point?
4
How to draw sky chart?
7
How to compute sine wave with accuracy over the time
8
Get random vector3 on plane
15
How to build Celestia to Android?
See more linked questions