I'm trying to figure out what an "ASP.NET 5 Class Library" (vNext) C# project has to do with ASP.NET. Why create a project with this template rather than just a regular C# "Class Library" project?

I like the new features, such as project.json file rather than .csproj file etc, but it doesn't seem right to create an "ASP.NET" class library when the project has nothing to do with ASP.NET or IIS etc. It's just a project for the business logic layer. A new WebApi ASP.NET web site will eventually reference this project, but that's not relevant at this point.

Is it just badly named? Should it just be called "vNext Class Library" and not use an icon that looks like a web app?

You can reference a *.csproj project from a *.kproj project (this was just made a lot easier with the new preview of Visual Studio 2015), but it was always possible with some manual steps.

Why does the name have "ASP.NET" in it?

As far as the names goes, it's a relic of history that will soon be addressed. The new project type is useful far beyond ASP.NET 5 applications. Expect to see new names in a future preview of Visual Studio:

With the release of Visual Studio 2015 RC you can see the updated project template names:

These use the project.json file and the .NET Execution Environment (DNX) to build, run, and package (into a NuGet package) the project. 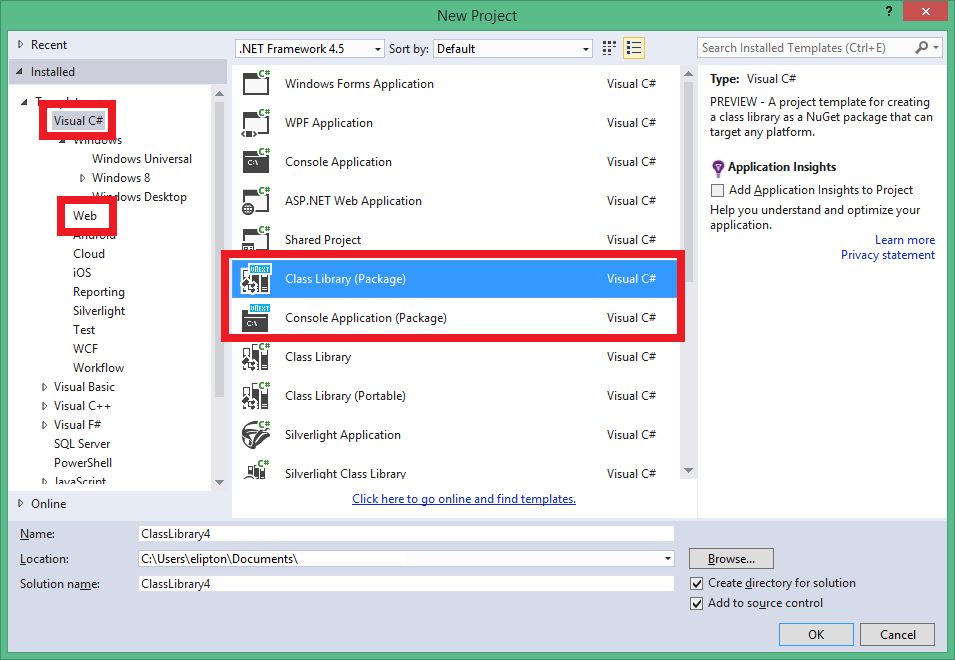 This is an interesting observation, the current template will generate a class library compatible with ASP.NET 5 runtime. You don't get that from the normal C# class library.

I filed the following issue for tracking this design question - https://github.com/aspnet/Home/issues/281

From what I understand one benefit is that the end product of ASP.NET 5 Class Library project is a NuGet package (rather than just the .dll assembly).

You can generate the NuGet package by right clicking the project in Visual Studio 2015 and choosing the "Publish..." option. Or you can use "KPM pack" at the command line.

Also, you have the ability to use the ASP.NET 5 Core runtime so that your library can run cross-platform .

Not the answer you're looking for? Browse other questions tagged c# asp.net asp.net-mvc asp.net-core or ask your own question.

9
Why create a class library (package)?
3
dnx451 actually means .net 4.5
0
How to change asp.net 5 app targeted framework version in Visual Studio 2015?
0
How should I design my visual studio solutions with the new class library nuget package

687
How do you create a dropdownlist from an enum in ASP.NET MVC?
840
Reading settings from app.config or web.config in .NET
335
The breakpoint will not currently be hit. No symbols have been loaded for this document in a Silverlight application
842
File Upload ASP.NET MVC 3.0
1461
Why not inherit from List<T>?
5
Can't use required attribute in the asp.net vnext class library
17
Issue adding reference to class library project in ASP.NET 5 (Core)
0
What is wrong with this project file for a ASP.NET 5 class library?
5
NO .csproj file in my asp.net core project