How can I delete all unversioned/ignored files/folders in my working copy?

If I have a working copy of a Subversion repository, is there a way to delete all unversioned or ignored files in that working copy with a single command or tool? Essentially, I'm looking for the SVN analogue to git clean.

Either a command line or GUI solution (for TortoiseSVN) would be acceptable.

This has the following features:

I use a shell script named svnclean that contains the following:

Modifying Yanal-Yves Fargialla and gimpf's answers using Powershell (but not being allowed to comment on the original post by Stackoverflow):

This adds the carat ("^") to specify the start of line, avoiding matching all files that contain the letter "i". Also add the flags for -recurse and -force to rm to make this command non-interactive and so usable in a script.

Many things in SVN can be done in different ways, as evidenced by the varied command line answers given here. With the advent of version 1.7 there is yet another technique for TortoiseSVN that, in fact, provides a finer grain resolution than Stefan's answer provided, letting you select non-versioned files separately from ignored files. Just select TortoiseSvn >> Clean up... to open this dialog. 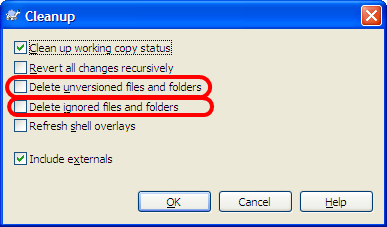 This oneliner works for me (based on Richard Hansen's answer, which surprisingly didn't work for files containing spaces):

Not really a nice and clean solution, but the fastest way I know of (on Windows).

Thanks to pkh for the tip with the ignored files.

This is similar to other answers, but actually gets ignored files (note the 'I' in the REs):

Somebody said you can't do it from the Windows command line.

Does it in one line and doesn't require a single GNU tool. :)

you can't delete them with just SVN command line (not sure about GUI tools though) if you are under linux system this might help:

The other (brutal) method is to commit changes, delete all from folder and checkout again.

Not the answer you're looking for? Browse other questions tagged svn tortoisesvn ignore or ask your own question.

111
Automatically remove Subversion unversioned files
46
How to remove untracked files in SVN
54
SVN - unable to merge branch back into trunk - numerous tree-conflicts
44
Powershell: match operator returns true but $matches is null
25
Merging across branches in Subversion isn't adding all the new files. Why not?
3
How can I do a complete clean of my VS 2012 solution?
0
Cordova phongap build fails connot find symbol webview
1
svn: cleanup/revert recursively a folder to make sure that it has no files that aren't part of SVN
1
How to do a sparse checkout and update from SVN on Jenkins?
1
Deleting all new local files svn status shows as `?`
See more linked questions

220
How do you move a file?
247
How do I move a file (or folder) from one folder to another in TortoiseSVN?
217
Remove file from SVN repository without deleting local copy
387
Pushing an existing Git repository to SVN
314
How to git-svn clone the last n revisions from a Subversion repository?
177
How do I 'svn add' all unversioned files to SVN?
2349
How do I make Git ignore file mode (chmod) changes?
1382
How do I configure git to ignore some files locally?
227
How can I get `find` to ignore .svn directories?