I'm working with Android Studio 1.1 Preview 1. I noticed that when I create a new project I'm getting the following hierarchy: 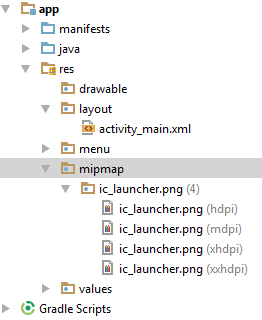 Should I put all my resources in the mipmap folders, or just the app icon?

The mipmap folders are for placing your app/launcher icons (which are shown on the homescreen) in only. Any other drawable assets you use should be placed in the relevant drawable folders as before.

According to this Google blogpost:

It’s best practice to place your app icons in mipmap- folders (not the drawable- folders) because they are used at resolutions different from the device’s current density.

When referencing the mipmap- folders ensure you are using the following reference:

The reason they use a different density is that some launchers actually display the icons larger than they were intended. Because of this, they use the next size up.

551
Can the Android drawable directory contain subdirectories?
299
How to change colors of a Drawable in Android?
749
Standard Android Button with a different color
1233
Is quitting an application frowned upon?
1060
How to convert a Drawable to a Bitmap?
618
Can the Android layout folder contain subfolders?
1068
Android Studio: Add jar as library?
471
Mipmap drawables for icons
73
Android Studio drawable folders
803
Error retrieving parent for item: No resource found that matches the given name after upgrading to AppCompat v23