I know about Data URIs in which base64 encoded data can be used inline such as images. Today I received an email actually an spam one in which there was an animated (gif) icon in its subject:

Here is the icon alone:

So the only thing did cross my mind was all about Data URIs and if Gmail allows some sort of emoticons to be inserted in subject. I saw the full detailed version of email and pointed to subject line at the below picture:

So GIF comes from =?UTF-8?B?876Urg==?= encoded string which is similar to Data URI scheme however I couldn't get the icon out of it. Here is element HTML source:

They are referred to internally as goomoji, and they appear to be a non-standard UTF-8 extension. When Gmail encounters one of these characters, it is replaced by the corresponding icon. I wasn't able to find any documentation on them, but I was able to reverse engineer the format.


#What are these icons?

Those icons are actually the icons that appear under the "Insert emoticons" panel. 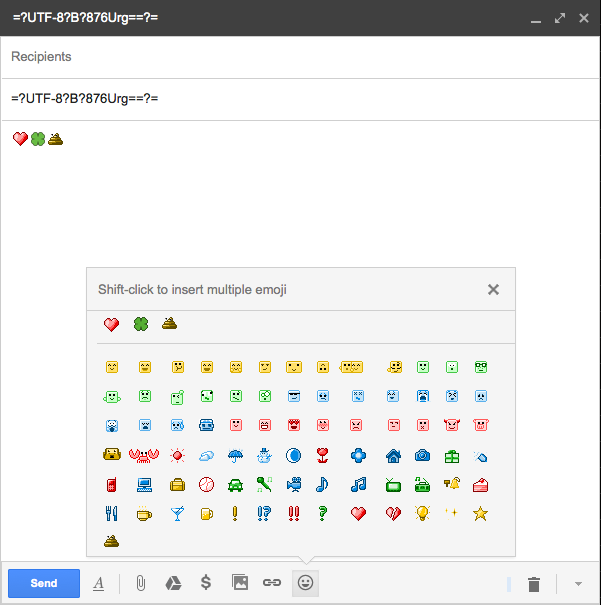 While I don't see the 52E icon in the list, there are several others that follow the same convention.

Note that there are also some icons whose names are prefixed, such as gtalk.03C

. I was not able to determine if or how these icons can be used in this manner.


#What is this Data URI thing?

It's not actually a Data URI, though it does share some similarities. It's actually a special syntax for encoding non-ASCII characters in email subjects, defined in RFC 2047. Basically, it works like this.

So, in our example string, we have the following data.

These bits are consistent with a 4-byte UTF-8 encoded character.

So the relevant bits are the following.:

In hexadecimal, these bytes are the following:

As you can see, except for the FE prefix which is presumably to distinguished the goomoji icons from other UTF-8 characters, it matches the 52E in the icon URL. Some testing proves that this holds true for other icons.


#Sounds like a lot of work, is there a converter?:

This can of course be scripted. I created the following Python code for my testing. These functions can convert the base64 encoded string to and from the short hex string found in the URL. Note, this code is written for Python 3, and is not Python 2 compatible.

And, of course, finding an icon's URL simply requires creating a new draft in Gmail, inserting the icon you want, and using your browser's DOM inspector.

If you use the correct hex code point (e.g. fe4f4 for 'pile of poo') and If it is correctly encoded within the subject line header, let it be base64 (see @AlexanderOMara) or quoted-printable (=?utf-8?Q?=F3=BE=93=B4?=), then Gmail will automatically parse and replace it with the corresponding emoji.

Here's a Gmail emoji list for copying and pasting into subject lines - or email bodies. Animated emojis, which will grab even more attention in the inbox, are placed on a yellow background:

Many thanks to Alexander O'Mara for such a well-researched answer about the goomoji-tagged HTML images!

This userscript eliminates both HTML-image (thanks to awesome work of Alexander O'Mara) and pure-Unicode types.

For the latter type, the userscript includes a regular expression designed to capture the Unicode sequences likely to be abused by marketers. The regex looks like this in ES6 Javascript (the userscript translates this to widely-supported pre-ES6 regex using the amazing ES6 Regex Transpiler):

39
Undocumented Java regex character class: \p{C}
1
Is there anyway we can have an animated gif in the email's subject line?