How to Compile sfml 2.2 in cmake for code::blocks

I am having a huge problem with the new sfml and have spent the day trying to figure it out. I have finally found I need to costume compile it with cmake. The big problem is is cmake keeps asking for CMakeLists.txt and its not there. Please help me I just want to start coding in sfml. I am running windows 8.1 and if you need any more information just ask me and I will try to give you it. If I am looking at the problem wrong can you please come up with a new solution.

In my opinion the easiest way to build SFML is to use the "MinGW Makefiles" CMake generator and the CMake GUI. So here is a brief tutorial on how to build SFML that way.

If you do not have your MinGW compiler's bin directory in PATH, you can temporarily add it by opening a command prompt (Windows Key + R and enter cmd + Enter):

Next you can start the CMake GUI from the command prompt by typing cmake-gui. If CMake's bin directory hasn't been added to PATH, I highly recommend you do so in a similar fashion as mentioned above.

Then setup the path to SFML and a build path for, I usually just use the subdirectory build\.

Then press the Configure button and pick the MinGW Makefiles generator.

Note: If you use MSYS you need to use the MSYS Makefiles generator instead. 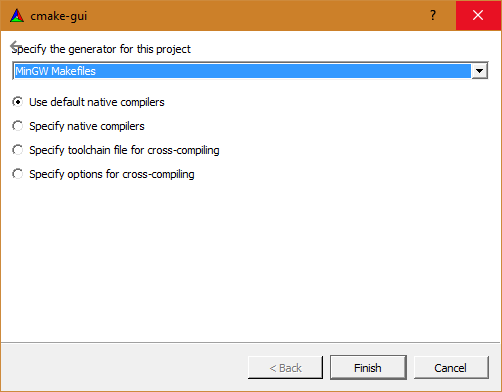 As a next step you can change the various CMake variables. A full explanations of these options can be found in the official SFML CMake tutorial. One of the important parts is to change the CMAKE_INSTALL_PREFIX, since you'll get permission issues with the default CMake value and you essentially really don't want your library files installed there. Also don't pick the build directory, otherwise the install will end up messy. I personally prefer to use the sub-directory /install.

After you've changed everything you wanted to change you can click on Generate and you should get the two done-messages. 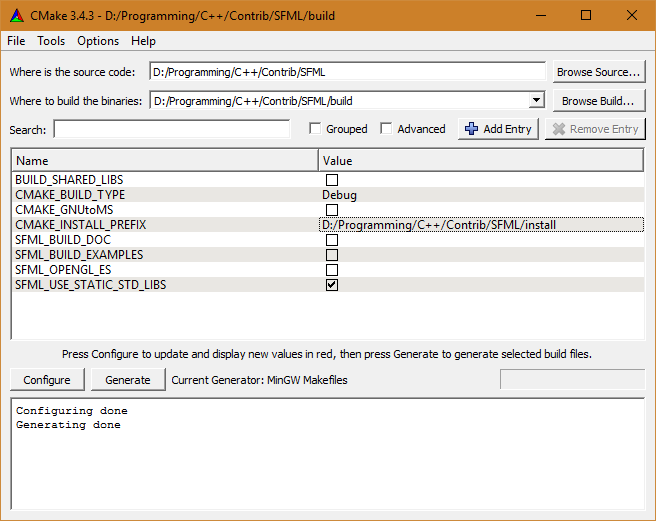 CMake merely generates makefiles and project files, as such SFML as a C++ library hasn't been built yet and thus we need to this next. For that we switch back to the command prompt and change the directory to the build directory we've previously set in CMake.

Since we want everything directly installed to the previously specified CMAKE_PREFIX_INSTALL directory, we'll now run the makefile's install target. Additionally since we're most likely using a multi-core processor, we really want to get things building quickly and thus make use of the -jN flag, where N is an integer that specifies how many threads shall be used. Keep in mind that this can really freeze your system if you pick a number too high for your system. Enter the command mingw32-make install -jN as shown below.

Note: If you're using MSYS (or nuwen's MinGW compiler) you need to use make instead of mingw32-make.

Wait for the process to finish and check the install directory.

Congratulations you have successfully built SFML!

If you really want a Code::Blocks project file, then you can repeat the first few steps from above, but instead of the MinGW Makefiles CMake generator pick the CodeBlocks - MinGW Makefiles. 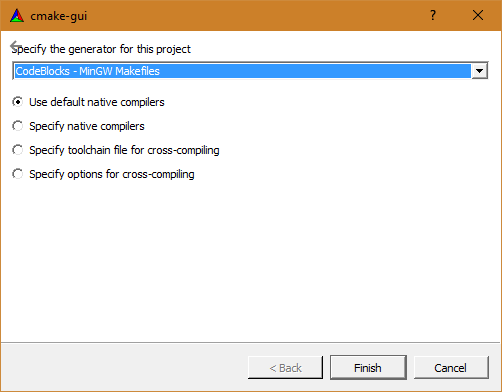 Adjust the settings as mentioned above, including CMAKE_INSTALL_PREFIX and press the Generate button. After everything has been generated, you can go and open up the Code::Blocks project file in the build directory. 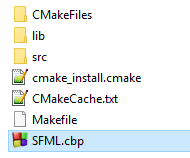 In Code::Blocks you can then easily pick your preferred target (install is recommended) and click on the build button. 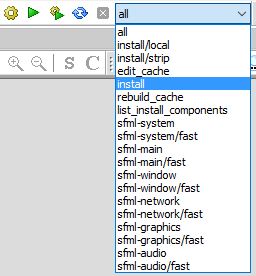 Wait for the process to finish and check the install directory.

Congratulations you have successfully built SFML!

Not the answer you're looking for? Browse other questions tagged c++ cmake codeblocks sfml or ask your own question.

2056
How do I profile C++ code running on Linux?
317
Switching between GCC and Clang/LLVM using CMake
549
Looking for a 'cmake clean' command to clear up CMake output
219
How exactly does CMake work?
1578
Replacing a 32-bit loop counter with 64-bit introduces crazy performance deviations with _mm_popcnt_u64 on Intel CPUs
452
What is the difference between using a Makefile and CMake to compile the code?
0
Some headers-only files in my project cannot include "SFML/Graphics.hpp" using CMake and Vscode
0
Code is not compiling with cmake on MacOS? (SFML)