I'm using PyCharm Community Edition 4.0.4 on a Macbook running Mavericks. Under Preferences > Build, Execution, Deployment > Console > Python Console there is a text area to input a starting script. Initially it contains import sys; followed by a print statement that prints the file path of the Python framework as well as the file path of the current file. However, when I alter or delete the print statements in this section, and then hit apply and OK, nothing changes in my python console output. I have tried restarting Pycharm and then running a hello world program, but the initial starting script output is still there.

I am just running a simple hello world program, with one package and two files (the other being the default __init__.py). How can I alter the starting script correctly?

You want to change the startup scripts then. Change called "Starting Script": 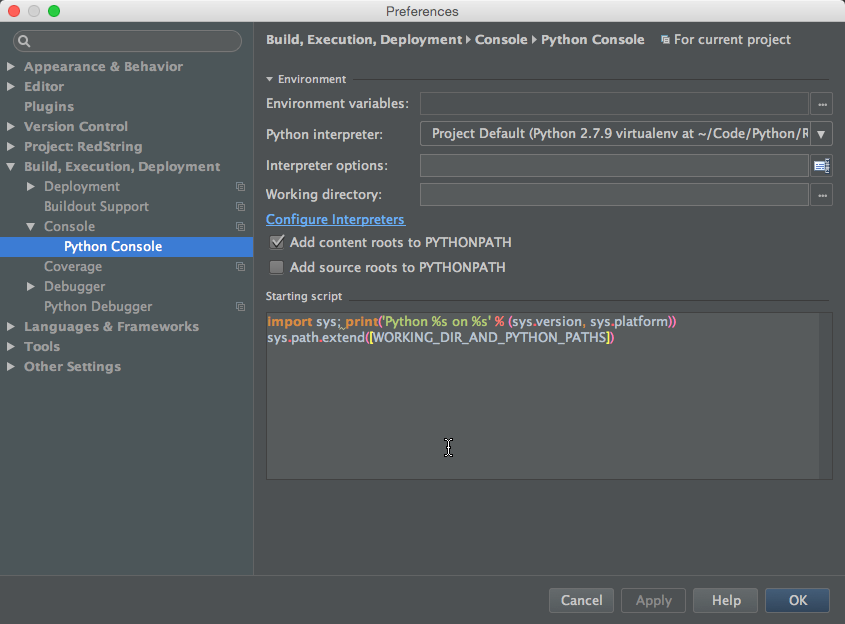 1
How do I change the startup script in console in PyCharm's debugger?

1138
How to terminate a Python script
1338
How can you profile a Python script?
21
PyCharm output error messages interspersed with console output. How to fix this?
3
Pycharm console is blank
78
How to link PyCharm with PySpark?
10
Setting startup script in PyCharm debugger console
0
how can I configure PyCharm so that running a Python script file is visible for Python Console
0
Can't get scripts to run on Pycharm