What is the difference between flatmap and switchmap in RxJava?

The rxjava doc definition of switchmap is rather vague and it links to the same page as flatmap. What is the difference between the two operators?

According to the documentation ( http://reactivex.io/documentation/operators/flatmap.html )

the switchMap is like the flatMap, but it will only emit items from the new observable until a new event is emitted from the source observable.

The marble diagram shows it well. Notice the difference in the diagrams:

In flatMap, all mapped results will be emitted, even if they're "stale". In other words, both first and second of the mapped green emissions happen -- a green square would've been emitted (if they used consistent map function; since they did not, you see the second green diamond, even though it is emitted after the first blue diamond) 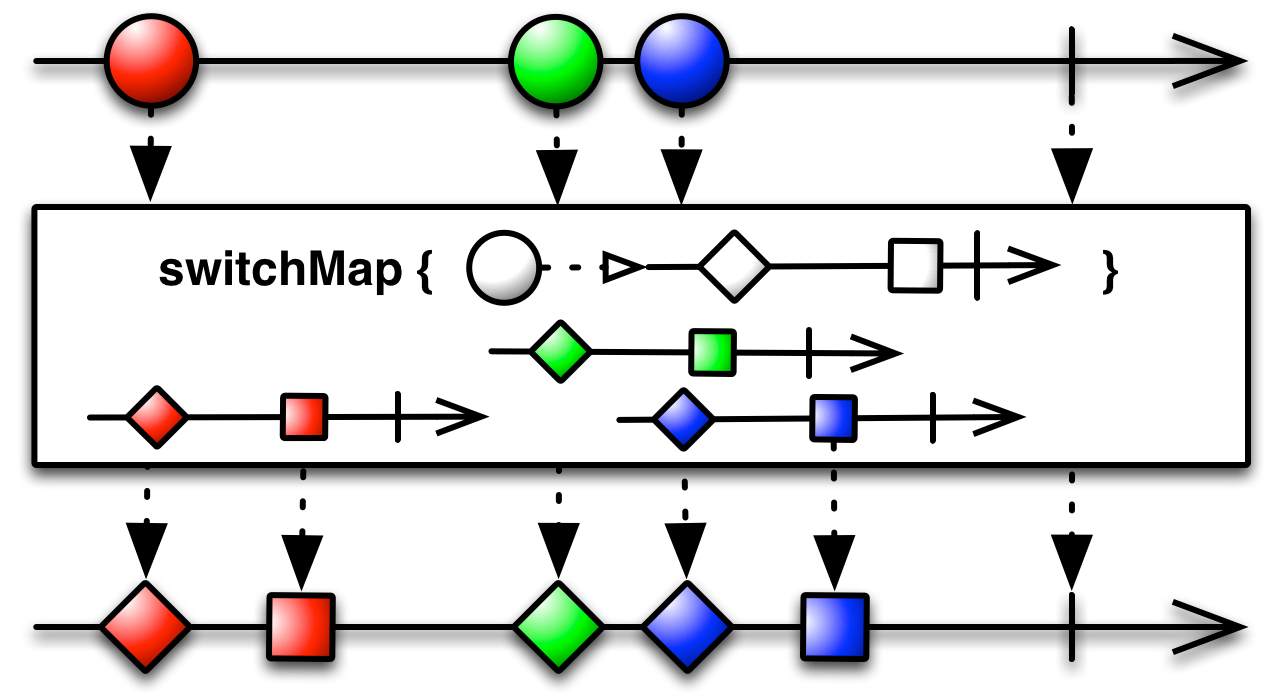 I came across this when implementing "instant search" - i.e. when user types in a text box, and results appear in near real-time with each key stroke. The solution seems to be:

With flatMap, the search results could be stale, because search responses may come back out of order. To fix this, switchMap should be used, since it ensures that an old observable is unsubscribed once a newer one is provided.

No flatMap discussion is complete without comparing and contrasting with switchMap, concatMap and concatMapEager.

All of these methods take a Func1 that transform the stream into Observables which are then emitted; the difference is when the returned Observables are subscribed and unsubscribed to, and if and when those the emissions of those Observables are emitted by the ____Map operator in question.

switchMap was once called flatMapLatest in RxJS 4.

It basically just passes on the events from the latest Observable and unsubscribes from the previous one.

Map, FlatMap, ConcatMap and SwitchMap applies a function or modifies the data emitted by an Observable.

If you´re looking for an example code

Here is the one more - 101 line long example. That explains the thing for me.

Like was said: it gets the last observable (the slowest one if you will) and ignores the rest.

You see the A got ignored.

4
Rxjs Observable Interval and Angular2 HTTP: wait for response
1
RxJava2 how to update existing subscription when request parameter changes
2
Angularfire2: Nested observables on auth change and permission denied
4
RxJava2 idiom for combining two Maybes
1
Inner map not getting called in Rxjs
0
Nested observables via flatMap outputs duplicates
0
RxJs flatMap to Rx.DOM.getJson not firing
1
What method should be called instead of subscribe in rxjs after flatMaps when there is no stream to be passed through?