I've found this in the NHibernate documentation (it's one method to generate unique keys, section 5.1.4.2), but I haven't found a good explanation of how it works.

I know that Nhibernate handles it, and I don't need to know the inside, but I'm just curious.

The basic idea is that you have two numbers to make up a primary key- a "high" number and a "low" number. A client can basically increment the "high" sequence, knowing that it can then safely generate keys from the entire range of the previous "high" value with the variety of "low" values.

It can be very useful (particularly with ORMs) to be able to set the primary keys on the client side, instead of inserting values without primary keys and then fetching them back onto the client. Aside from anything else, it means you can easily make parent/child relationships and have the keys all in place before you do any inserts, which makes batching them simpler.

In addition to Jon's answer:

It is used to be able to work disconnected. A client can then ask the server for a hi number and create objects increasing the lo number itself. It does not need to contact the server until the lo range is used up.

The hi/lo algorithm splits the sequences domain into hi groups. A hi value is assigned synchronously. Every hi group is given a maximum number of lo entries, that can be assigned off-line without worrying about concurrent duplicate entries.

And this visual presentation is easy to follow as well: 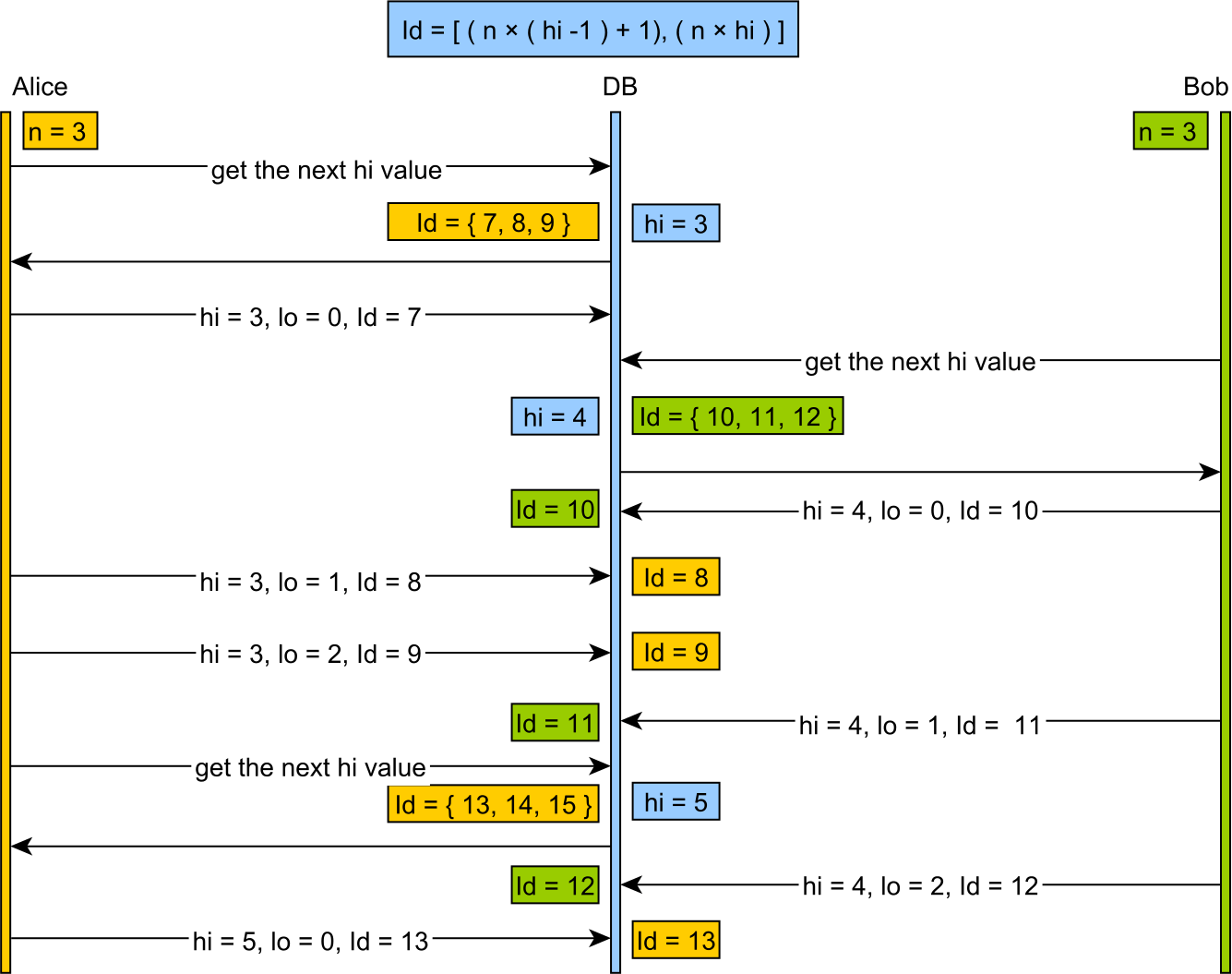 While hi/lo optimizer is fine for optimizing identifier generation, it doesn't play well with other systems inserting rows into our database, without knowing anything about our identifier strategy.

Hibernate offers the pooled-lo optimizer, which offers the advantages of the hi/lo generator strategy while also providing interoperability with other 3rd-party clients that are not aware of this sequence allocation strategy.

Being both efficient and interoperable with other systems, the pooled-lo optimizer is a much better candidate than the legacy hi/lo identifier strategy.

Lo is a cached allocator that splits the keyspace into large chunks, typically based on some machine word size, rather than the meaningfully-sized ranges (eg obtaining 200 keys at a time) which a human might sensibly choose.

To allocate the next, say, 200 keys (which are then held as a range in the server & used as needed):

Providing you can commit this transaction (use retries to handle contention), you have allocated 200 keys & can dispense them as needed.

With a chunk-size of just 20, this scheme is 10x faster than allocating from an Oracle sequence, and is 100% portable amongst all databases. Allocation performance is equivalent to hi-lo.

Unlike Ambler's idea, it treats the keyspace as a contiguous linear numberline.

This avoids the impetus for composite keys (which were never really a good idea) and avoids wasting entire lo-words when the server restarts. It generates "friendly", human-scale key values.

Mr Ambler's idea, by comparison, allocates the high 16- or 32-bits, and generates large human-unfriendly key values as the hi-words increment.

Design-wise, his solution is fundamentally more complex on the number-line (composite keys, large hi_word products) than Linear_Chunk while achieving no comparative benefit.

The Hi-Lo design arose early in OO mapping and persistence. These days persistence frameworks such as Hibernate offer simpler and better allocators as their default.

I found the Hi/Lo algorithm is perfect for multiple databases with replication scenarios based in my experience. Imagine this. you have a server in New York (alias 01) and another server in Los Angeles (alias 02) then you have a PERSON table... so in New York when a person is create... you always use 01 as the HI value and the LO value is the next secuential. por example.

in Los Angeles you always use the HI 02. for example:

So, when you use the database replication (no matter what brand) all the primary keys and data combine easily and naturally without to worry about duplicate primary keys, collissions, etc.

This is the best way to go in this scenario.

262
Advantages and disadvantages of GUID / UUID database keys
46
Auto increment in MongoDB to store sequence of Unique User ID
53
AddAsync() vs Add() in EF Core
35
Explanation of NHibernate HiLo
8
Once a HiLo is in use, what happens if you change the capacity (maximum Lo)?
6
Generate Primary key without using Database
14
Android (distributed application) primary key strategy
10
What is the difference between AddRange and AddRangeAsync in EF Core
11
Why Entity Framework have AddAsync?
4
Why is NHibernate refusing to batch inserts?
See more linked questions

5108
What is the difference between "INNER JOIN" and "OUTER JOIN"?
1632
What is the best algorithm for overriding GetHashCode?
1681
What is the meaning of single and double underscore before an object name?
1195
Ukkonen's suffix tree algorithm in plain English
1843
Image Processing: Algorithm Improvement for 'Coca-Cola Can' Recognition
1025
How can I find the time complexity of an algorithm?
202
How does the HyperLogLog algorithm work?
2037
What is the optimal algorithm for the game 2048?