How to use General and Downloads icon seen in Xcode's Preferences Panel?

I have been creating a preferences panel that would pop up when an user taps ⌘+, in my Cocoa app, and I like to use the same General and Downloads icons that are used in Xcode.

However, as far as I know, when I moved Image Toolbar Item from Object Library to the Toolbar in IB and then search for the appropriate Image Name on Attribute Inspector, I cannot find these icons on the list. At first I wonder whether this is available only to Apple's software, but later I found that this same General and Downloads icons are used in 3rd party app, such as Dash:

Also, the NSPreferencesGeneral in the Image Name is NOT the same General icon as seen in the toolbar above. So how can I can use the correct toolbar icon in my app (which is built in Yosemite)?

Strangely, even within Apple's software, there are two types of General icon used. The toolbar below is from Calendar.app, but this is also used in other softwares such as Safari and Terminal:

This General icon looks like not fully compatible with Retina display. Even worse, the Xcode 6.2 uses the cool icon as seen in the first image, while Xcode 6.3 beta uses the awkward icon that is seen in Calendar.app.

Also, the NSImage Class Reference displays the same cool icon as seen in Xcode (6.2) and Dash. 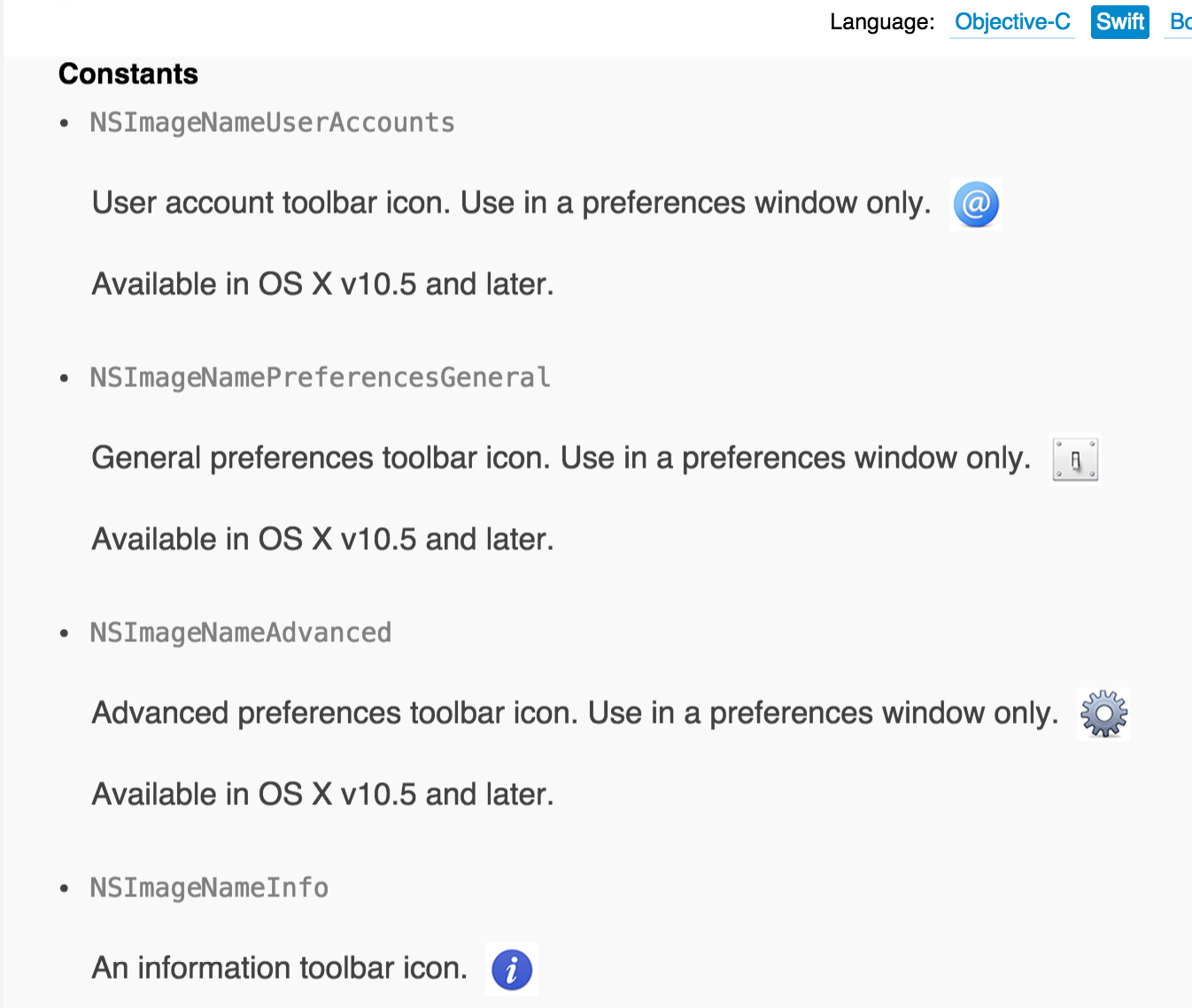 So what is happening here...? Note that I use all of the apps I mentioned in this post on the same operating system on the same Mac. Anyone knows why this occurs?

The Downloads icon is custom and part of Xcode's resources. You don't own this artwork and don't have the right to redistribute it. I suspect Dash's developer also does not have Apple's permission to redistribute that icon.

As to the General icon, the system-provided one (as all system-provided icons) are available for developers' use when accessed via the NSImage API. The one you see in Calendar.app is, like the Downloads icon, is a resource inside Calendar.app. I'm not entirely sure whether this is a public domain image somewhere but it's likely it's Apple's property.

Either way, it's in your best legal interests not to redistribute artwork in your own app without permission (again, standard icons accessed through the API aren't "redistributed", so you're safe to use them - that's what they're there for). Your choices are a) use public domain artwork, b) make your own artwork, c) obtain written legal permission to redistribute someone else's artwork, d) buy ready-made artwork, or e) pay a graphic artist to produce custom artwork for you.

I would use the images as provided by the "Constants" section of the NSImage documentation, and not worry about which version it is exactly, as you have no control on it (and none are provided by Apple anyway).

Not the answer you're looking for? Browse other questions tagged xcode cocoa nstoolbar nstoolbaritem or ask your own question.

4
How do you vertically centering an image on an NSButton
23
Xcode 4.3 : missing icons for iOS apps in Organizer's archives
127
How to manually create icns files using iconutil?
2
Retina "@2x" graphics incorrectly being used on standard-def display (using Snow Leopard / Xcode 4.2 )
1
Why does my launch image have a stretched icon image behind it, and how do get rid of it?
28
In Xcode, how do I use a different AppIcon for each target iOS App?
50
Xcode 6.1 Warning about Launch Image in Asset Catalog
2
NSToolbarItem with Segmented Control - Images Not Rendering Correctly
0
What is the correct way to create toolbar buttons with Xcode 12