What is the difference between loose coupling and tight coupling in the object oriented paradigm?

Can any one describe the exact difference between loose coupling and tight coupling in Object oriented paradigm?

Tight coupling is when a group of classes are highly dependent on one another.

This scenario arises when a class assumes too many responsibilities, or when one concern is spread over many classes rather than having its own class.

Loose coupling is achieved by means of a design that promotes single-responsibility and separation of concerns.

A loosely-coupled class can be consumed and tested independently of other (concrete) classes.

Interfaces are a powerful tool to use for decoupling. Classes can communicate through interfaces rather than other concrete classes, and any class can be on the other end of that communication simply by implementing the interface.

Explanation without any code

Simple analogy to explain the concept. Code can come later. 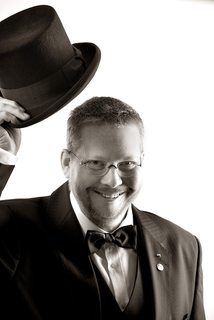 In the picture above, the Hat is "loosely coupled" to the body. This means you can easily take the hat off without making any changes to the person/body. When you can do that then you have "loose coupling". See below for elaboration.

Think of your skin. It's stuck to your body. It fits like a glove. But what if you wanted to change your skin colour from say white to black? Can you imagine just how painful it would be to peel off your skin, dye it, and then to paste it back on etc? Changing your skin is difficult because it is tightly coupled to your body. You just can't make changes easily. You would have to fundamentally redesign a human being in order to make this possible.

God was not a good object oriented programmer.

Now think of getting dressed in the morning. You don't like blue? No problems: you can put a red shirt on instead. You can do this easily and effortlessly because the shirt is not really connected to your body the same way as your skin. The shirt doesn't know or care about what body it is going on. In other words, you can change your clothes, without really changing your body.

That's the basic concept in a nutshell.

Why is all of this important?

When writing software, change is inevitable. If we know in advance that a change is going to come in a particular place, then we should ensure our software is loosely coupled on that specific point, because that would enable us to make those changes easily and quickly, without bugs.....so what does that mean? Consider some examples:

What a pain. I had to rewrite the entire thing. I rewrote the entire thing using interfaces - a loosely coupled design pattern - and now adding new output formats, or changing things is now so much easier. I can edit the JSON portions without fear I will break my CSV output. The other important point: change in software is normal. Loosely couple on the points of change.

Do we need to make everything "loosely coupled"? Probably not. We have to exercise our judgement. Some amount of coupling is inevitable. But consider minimizing it if you know in advance where it will change. I would also counsel against guessing where things will change, and loosely coupling everything. Loosely couple, only when you need to.

The answers above provide some code which is worth reading.

Loose coupling goes hand-in-hand with polymorphism and interfaces. If you like cartoons and analogies, consider some other posts I have written:

You may find this paper by Martin Fowler (PDF) helpful.

In general Tight Coupling is bad in but most of the time, because it reduces flexibility and re-usability of code, it makes changes much more difficult, it impedes testability etc.

Tightly Coupled Object is an object need to know quite a bit about each other and are usually highly dependent on each other interfaces. Changing one object in a tightly coupled application often requires changes to a number of other objects, In small application we can easily identify the changes and there is less chance to miss anything. But in large applications these inter-dependencies are not always known by every programmer or chance is there to miss changes. But each set of loosely coupled objects are not dependent on others.

In short we can say, loose coupling is a design goal that seeks to reduce the interdependencies between components of a system with the goal of reducing the risk that changes in one component will require changes in any other component. Loose coupling is a much more generic concept intended to increase the flexibility of a system, make it more maintainable, and make the entire framework more 'stable'.

Coupling refers to the degree of direct knowledge that one element has of another. we can say an eg: A and B, only B change its behavior only when A change its behavior. A loosely coupled system can be easily broken down into definable elements.

For example, we have a system that can send output in two or more ways like JSON output, CSV output, etc.

In the example above, if we want to change the output in JSON, then we need to find and change in the whole code, because Class1 is tightly coupled with the CSVOutputGenerator class.

When two objects are loosely coupled, they can interact but have very little knowledge of each other.

Observer design pattern is a good example for making classes loosely coupled, you can have a look on it in Wikipedia.

What is Tight Coupling:-

As par above definition a Tightly Coupled Object is an object that needs to know about other objects and are usually highly dependent on each other's interfaces.

When we change one object in a tightly coupled application often it requires changes to a number of other objects. There is no problem in a small application we can easily identify the change. But in the case of a large applications these inter-dependencies are not always known by every consumer or other developers or there is many chance of future changes.

Problems with the above example

Here, OrderTotal() methods is give us complete amount for the current items of the carts. If we want to add the discount features in this cart system. It is very hard to do in above code because we have to make changes at every class as it is very tightly coupled.

But in case of loosely coupled architectures, message formats or operating platforms or revamping the business logic does not impact the other end. If the system is taken down for a revamp, of course the other end will not be able to access the service for a while but other than that, the unchanged end can resume message exchange as it was before the revamp.

There is a lot of nice answers here using analogies but a friend at work gave me an example that I liked more than all of the ones mentioned here... Eyes and Glasses!

Tight coupling would be the eyes. If I want to fix my vision, I'ts very expensive to get an eye transplant and holds a fair amount of risk. But what if the designer (being the human race) found a better way. Add a feature that is loosely coupled to the body so it can be easily changed! (yes.. glasses)

I can easily replace my glasses without breaking my underlying vision. I can take off the glasses and my vision will be how it was before (not better or worse). Using different pairs of glasses changes how we see the world through our eyes with little risk and easy maintainability.

So next time someone asks you "who cares if my code is tightly-coupled?" The answer is all about effort to change, effort to maintain and risk of change.

So how is this done in C#? Interfaces and Dependency Injection!

This a good example of the Decorator pattern as well, where the the eyes are the class we are decorating by meeting interface requirements but giving different functionality (e.g. sunglasses, reading glasses, magnifying glasses for jewelers e.t.c)

There are certain tools that provide dependency injection through their library, for example in .net we have ninject Library .

If you are going further in java then spring provides this capabilities.

Loosly coupled objects can be made by introducing Interfaces in your code, thats what these sources do.

Say in your code you are writing

now this statement in your method says that you are dependent on myclass this is called a tightly coupled. Now you provide some constructor injection , or property injection and instantiating object then it will become loosly coupled.

Loose coupling is and answer to to old style hardcoded dependencies and related issues issues like frequent recompilation when anything changes and code reuse. It stresses on implementing the worker logic in components and avoiding solution specific wire up code there.

Loose Coupling is the process of giving the dependency your class needs indirectly without providing all the information of the dependency(i.e in the from of interface) in case tight coupling you directly give in the dependency which is not good way of coding.

The client of Car class can create one with ONLY "X_COMPANY" engine.

Consider breaking this coupling with ability to change that:

Now, a Car is not dependent on an engine of "X_COMPANY" as it can be created with types.

A Java specific note: using Java interfaces just for de-coupling sake is not a proper desing approach. In Java, an interface has a purpose - to act as a contract which intrisically provides de-coupling behavior/advantage.

Bill Rosmus's comment in accepted answer has a good explanation.

For example if you use only simple raw SQL Query to receive data from SQL Server this is Loose coupling. The opposite of Loose Coupling and simple raw SQL Query is Tight Coupling and Entity Framework Core. In Entity Framework Core you have to full model with POCO class in your code reflect database structure, than means any changing in database you have to reflect in code.

Not the answer you're looking for? Browse other questions tagged oop object coupling or ask your own question.

7
What is loose coupling?
619
What is polymorphism, what is it for, and how is it used?
312
Interfaces — What's the point?
186
What is "loose coupling?" Please provide examples
104
How would you access Object properties from within an object method?
6
Where loose and tight coupling would be used as a real scenario?
7
How to load a component in console/shell
6
what is loose coupling and tight coupling in oop ( java )
13
How to build a PHP Dependency Injection Container
16
Proper way of creating child entities with DDD
See more linked questions