Change to most recently used tab when closing a tab in IntelliJ IDEA?

When I close an editor tab in IntelliJ, the tab that appears directly to the right of it gets opened next. Instead, I would rather have the most recently used tab open instead.

For example, if I have these tabs open:

And then I use CMD+SHIFT+N to open Baz.java, it now looks like this:

How can I configure the editor to go back to the most recently used tab?

And select Activate most recently opened tab for the When closing active editor option. 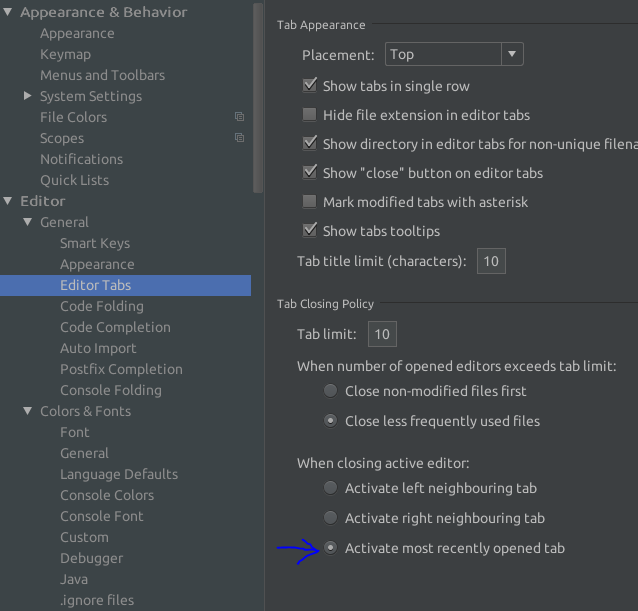 Not the answer you're looking for? Browse other questions tagged intellij-idea tabs or ask your own question.

912
How do I change Eclipse to use spaces instead of tabs?
780
Correct way to add external jars (lib/*.jar) to an IntelliJ IDEA project
11
Remove closed editor windows from Ctrl-Tab switcher?
2
Intellij last opened tab reorder (like in Eclipse)
0
Show a most recently used tab after dragging a tab in IntelliJ IDEA
117
How do I keep IntelliJ from closing my Editor Tabs automatically?
1
PhpStorm reopen closed tab