Possible to change where Android Virtual Devices are saved?

I've set up the Android SDK and Eclipse on my machine running Windows XP and AVDs (Android Virtual Devices) are saved to "Documents and Settings\user\.android" by default. Is there any way to change this behavior? I have all of the other components saved in a directory on a separate partition and would like everything to be consolidated. Obviously not a huge deal but does anyone here know a workaround for this?


Variable name: ANDROID_SDK_HOME
Variable value: a path to a directory of your choice

AVD Manager will use this directory to save its .android directory into it.

For those who may be interested, I blogged about my first foray into Android development...
Android "Hello World": a Tale of Woe

Alternatively, you can use the Rapid Environment Editor to set the environment variables.

Go to the Android tools directory. Edit the android.bat command file. At about the end of the command file, find a line similar to

where {your_prefer_dire} is your preferred directory without braces but add doublequotes,

Based on official documentation https://developer.android.com/studio/command-line/variables.html you should change ANDROID_AVD_HOME environment var:

After change or set ANDROID_AVD_HOME you will have to move all content inside ~user/.android/avd/ to your new location and change path into ini file of each emulator, just replace it with your new path

Move your .android to wherever you want it to.

This simply tells Linux that whenever the path ~/.android is referenced by any application, link it to /path/to/.android.

share|improve this answer
edited Jan 1 at 14:39

Check this out. using the android command to create avd you can specify where to place files.

Don't include .android in the variable value.

You can change the .ini file for the new AVD:

I don't know how to specify where the .ini file should be stored :)

The environmental variable ANDROID_AVD_HOME can be used to define the directory in which the AVD Manager shall look for AVD INI files and can therefore be used to change the location of the virtual devices;

The default value is %USERPROFILE%\.android\avd on Windows (or ~/.android/avd on Linux).

One can also create a link for the whole directory %USERPROFILE%\.android on Windows (or a sym-link for directory ~/.android on Linux).

When moving AVDs, the path entry in AVD INI file needs to be updated accordingly.

This will set ANDROID_SDK_HOME as system variable whenever you launch eclipse.

Please take note of the following : modifying android.bat in the Android tools directory, as suggested in a previous answer, may lead to problems.

If you do so, in order to legitimately have your .android directory located to a non-default location then there may be an inconsistency between the AVDs listed by Android Studio (using "Tools > Android > AVD Manager") and the AVDs listed by sdk command line tool "android avd".

I suppose that Android Studio, with its internal AVD Manager, does not use the android.bat modified path ; it relies on the ANDROID_SDK_HOME variable to locate AVDs.

My own tests have shown that Android tools correctly use the ANDROID_SDK_HOME variable.

Therefore, there is no point, as far as I know, in modifying android.bat, and using the environment variable should be preferred.

In Windows 10 I had that problem because My C Drive was getting full and I had needed free Space, AVD folder had 14 gig space so I needed move that folder to another driver,first answer not work for Me so I tested another way to fix this problem, I make a picture for you if you have the same problem, you dont need to move all of files in .android folder to another drive (this way not work) just move avd folders in ....android\avd to another drive and open .ini files and change avd folder path from that file to new path. Like this image:

I Hope this works for you.

In my case, what I concerned about is the C: drive disk space. So what I did is copy the ".avd" folder(not file) to other drive, and leave the ".ini" file there but change it to point to the moved

If you wonder how to do this, first install Link Shell Extension. After folder movement right click on it and select Pick Link Source then right click in .android folder and in Drop As... sub menu select Symbolic Link.

ANDROID_SDK_HOME also worked for me on Windows 8 x64 also find all location (in my case it was d:\.android) and delete it. You won't need it anymore.

In AVD manager, after setting up AVD using a target with Google APIs, on run was getting error.

During install (on Win7 system) I had chosen a SDK directory location, instead of accepting C:\Users\... I'd then added that directory to environment variable 'path' Command line: android list targets did show a couple of Google apis.

MacOs Get a directory adv

the default directory is:

and then Go to avd Folder edit .ini file with path to your custom emulator directory example :

and then save. Now your Emulator haschange 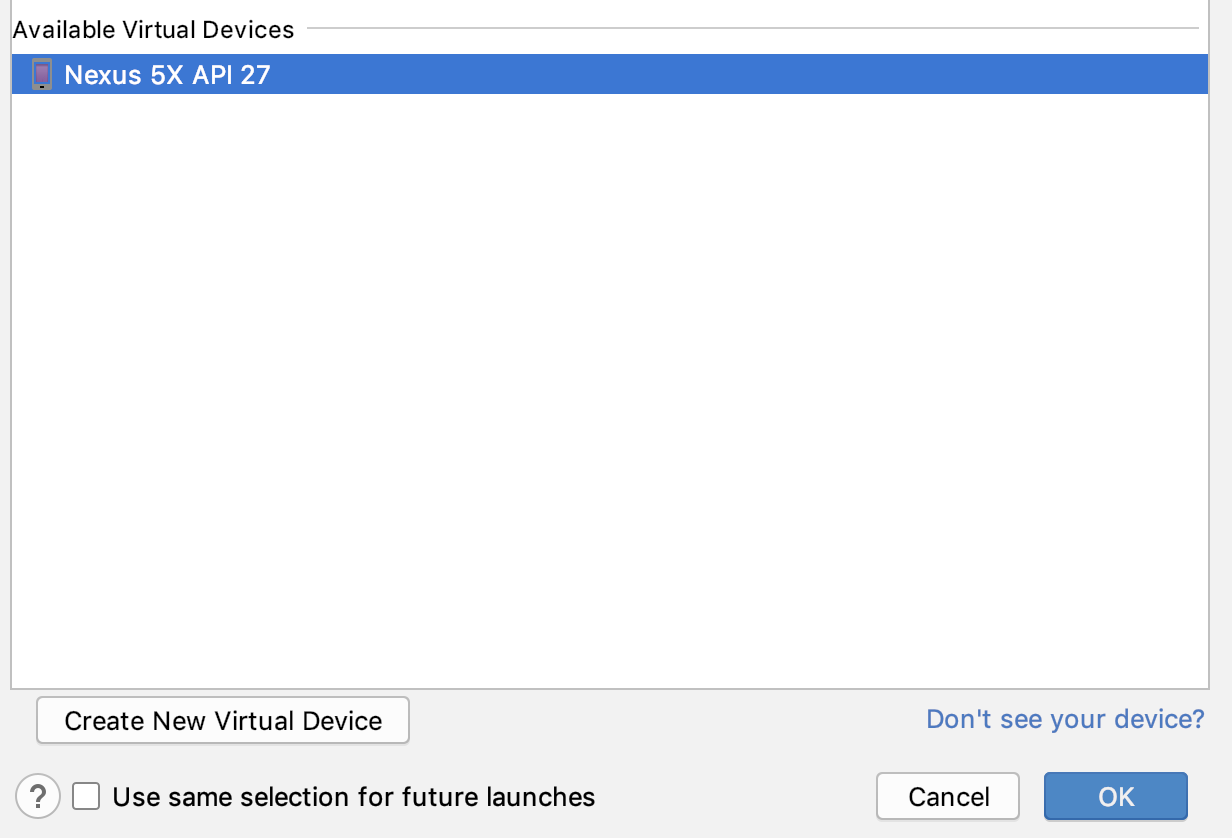 b. If this didn't help, open emulator settings, found in file "D:\Android\.android\avd\Pixel_API_27.ini".

Change a path to a new AVD folder. Restart the emulator.

Not the answer you're looking for? Browse other questions tagged windows android avd or ask your own question.