Is there a good way to explain how to resolve "! [rejected] master -> master (fetch first)'" in Git?

When I use this command $ git push origin master it display an error message.

The answer is there, git is telling you to fetch first.

Probably somebody else has pushed to master already, and your commit is behind. Therefore you have to fetch, merge the changeset, and then you'll be able to push again.

If you don't (or even worse, if you force it by using the --force option), you can mess up the commit history.

EDIT: I get into more detail about the last point, since a guy here just gave the Very Bad Advice of using the --force option.

As git is a DVCS, ideally many other developers are working on the same project as you, using the same repository (or a fork of it). If you overwrite forcefully with your changeset, your repository will mismatch other people's, because "you rewrote history". You will make other people unhappy and the repository will suffer. Probably a kitten in the world will cry, too.

You asked for the former, though. Go for 1) always, even if you will always use git by yourself, because it is a good practice.

After to wrote this code I received other error: (non-fast-forward)

I write this code:

And resolved my problem

You should use git pull, that´s command do a git fetch and next do the git merge.

If you use a git push origin master --force command, you may have problems in the future.

pull is always the right approach but one exception could be when you are trying to convert a none-Git file system to a Github repository. There you would have to force the first commit in.

or short of force -f

As it is stated in the Error message you have to "fetch first." This worked for me. Use the command:

Follow the steps given below as I also had the same problem:

This happens when your teammate have already committed. so his commit is on top. To avoid you do rebase (merge , fetch).

I solved my issue with the following.

You can use the following command: First clone a fresh copy of your repo, using the --mirror flag:

Adding an existing project to GitHub using the command line

Even if that doesn't work, you can simply code:

It's likely that someone else (e.g. your colleague) has put commits onto origin/master that aren't in your local master branch, and you are trying to push some commits from your local branch to the server. In 99% of cases, assuming you don't want to erase their work from origin, you have two options:

(Note that git pull is essentially just a git fetch and a git merge in this case.)

1) Rebase your local branch, so that it looks like your colleague made their commits first, and then you made your commits. This keeps the commit history nice and linear - and avoids a "merge commit". However, if you have conflicts with your colleague's changes, you may have to resolve those conflicts for each of your commits (rather than just once) in the worst case. Essentially this is nicer for everyone else but more effort for you. git pull --rebase # resolve conflicts here git push

(Note that git pull --rebase is essentially a git fetch and a git rebase origin/master.)

Sometimes it happens when you duplicate files typically README sort of.

I had faced this error while pressing the git push command. 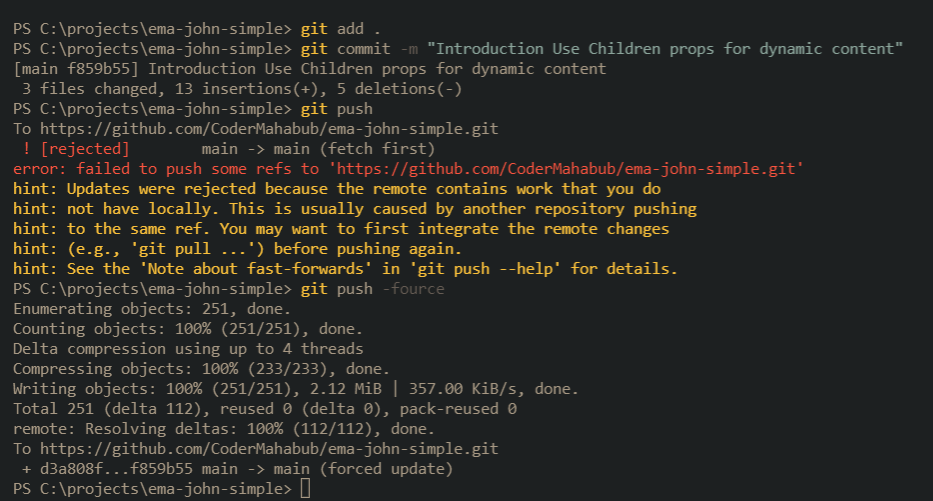 Try this command to solve your issue, it's solved my error.

One Pic has been attached for a visual explanation. 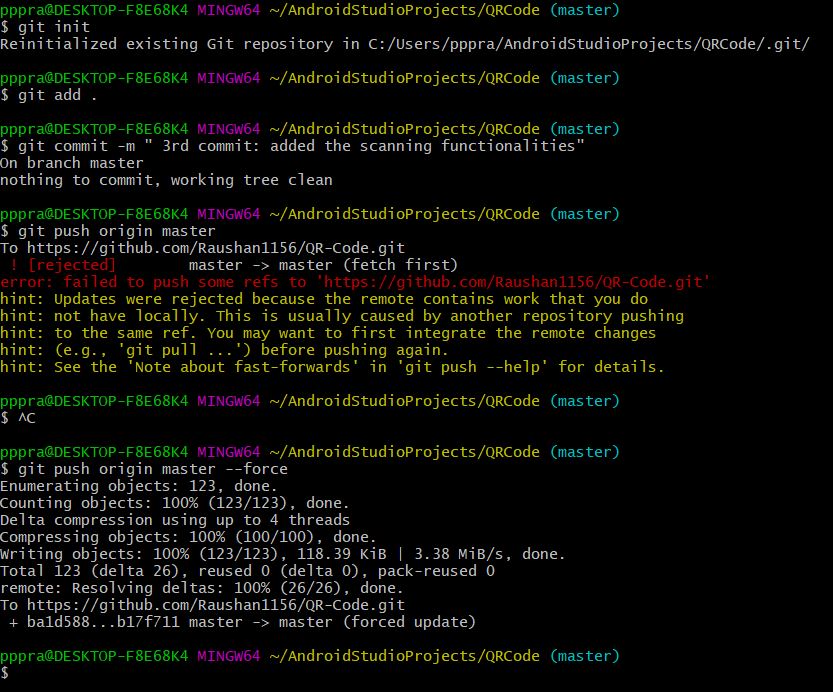 in this error showing time if you first checking your folder place correct path. And type: -

I overcame this by checking-out a new branch like this :

You are left with 2 branch : Master and newbranch , that you can manage to merge later.

! [rejected] main -> main (fetch first) error: failed to push some refs to 'https://github.com/Wasif-M/Micard-Flutter.git' hint: Updates were rejected because the remote contains work that you do hint: not have locally. This is usually caused by another repository pushing hint: to the same ref. You may want to first integrate the remote changes hint: (e.g., 'git pull ...') before pushing again. hint: See the 'Note about fast-forwards' in 'git push --help' for details.

Use this command after that:

You just have to mention your branch name along with your remote name.

The reason it happened in my case was when creating the GitHub rep link, I initialized it with README file

Just had to go through Git Bash

Then back to my cmd and I could: git push heroku master which in my case was the problem.

It is very easy to fix, run the following command:

0
How can I push the changes as the master branch (default)?
1
How to git pull without overwriting local changes?
-4
! [rejected] haslr -> haslr (fetch first)
0
Pushing Git repo issues
0
Solving the rejected push of only-a-file push
84
What does a grey icon in remote GitHub mean
0
While pushing to github, ! [rejected] master -> master (fetch first) error: failed to push some refs to "<github-link>"
-2
Error when sending change to the cloud through Git
-1
! [rejected] master -> master (fetch first) when pushing to git
0
Can't push to remote repo
See more linked questions

2324
How do I recover a dropped stash in Git?
4058
Undoing a git rebase
13516
What is the difference between 'git pull' and 'git fetch'?
4088
How do I delete a commit from a branch?
3625
How do I create a remote Git branch?
4732
Undo a Git merge that hasn't been pushed yet
5420
How do I push a new local branch to a remote Git repository and track it too?
3122
How do you push a tag to a remote repository using Git?
1728
How can I reconcile detached HEAD with master/origin?
1985
Remove tracking branches no longer on remote