problems with UTF-8 encoding in PHP

The characters I am getting from the URL, for example www.mydomain.com/?name=john , were fine, as longs as they were not in Russian.

For example 'Jānis' ( Latvian ) that worked fine before iconv, now turns into 'jДЃnis'.

Any idea if there's some universal encoder that would work with both the Cyrillic languages and not screw up other languages?

Actually this runs down to the problem of how the URL is encoded. If you're clicking a link on a given page the browser will use the page's encoding to sent the request but if you enter the URL directly into the address-bar of your browser the behavior is somehow undefined as there is no standardized way on the encoding to use (Firefox provides an about:config switch to use UTF-8 encoded URLs).

Besides using some encoding detection there is no way to know the encoding used with the URL in the given request.

Just to backup what I said above, I wrote a small test script that shows the default behavior of the five major browsers (running Mac OS X in my case - Windows Vista via Parallels in case of the IE):

So obviously the first three use UTF-8 encoded URLs while Opera and IE use ISO-8859-1 or some of its variants. Conclusion: you cannot be sure what's the encoding of textual data sent via an URL.

Why don't you just use UTF-8 with all files and processes?

Seems like the issue is the file encoding, you should always use UTF-8 no BOM as the prefered encoding for your .php files, code editors such as Intype let you easily specify this (UTF-8 Plain). 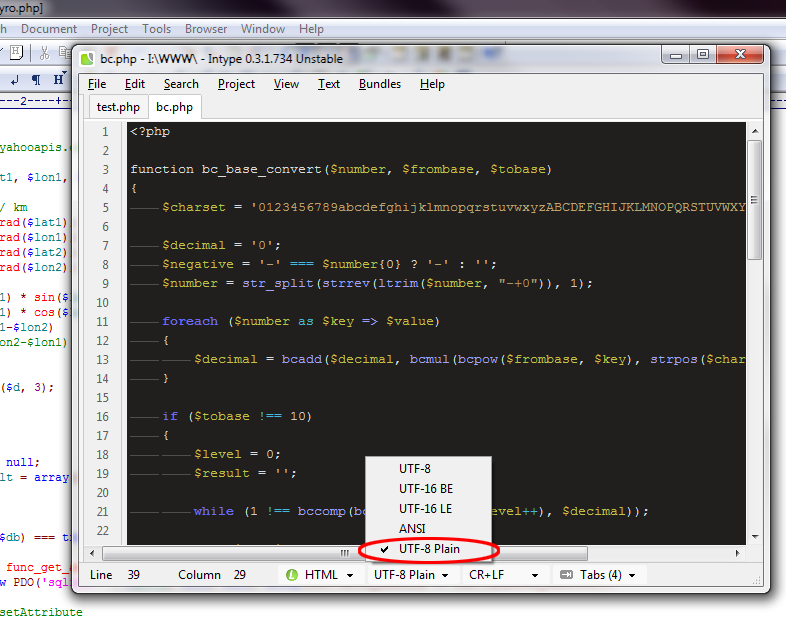 Also, add the following code to your files before any output:

You should also read The Absolute Minimum Every Software Developer Absolutely, Positively Must Know About Unicode and Character Sets (No Excuses!) by Joel Spolsky.

Not the answer you're looking for? Browse other questions tagged php utf-8 or ask your own question.