Ask Question
Asked 12 years, 8 months ago
Modified 7 years, 6 months ago
Viewed 44k times
63
votes
Closed. This question is opinion-based. It is not currently accepting answers.
Closed 7 years ago.
Locked. This question and its answers are locked because the question is off-topic but has historical significance. It is not currently accepting new answers or interactions.

Some people consider WordPress a blogging platform, some think of it as a CMS, some refer to WordPress as a development framework. Whichever it is, the question still remains. Is WordPress MVC compliant?

I've read the forums and somebody asked about MVC about three years ago. There were some positive answers, and some negative ones. While nobody knows exactly what MVC is and everybody thinks of it in their own way, there's still a general concept that's present in all the discussions.

I have little experience with MVC frameworks and there doesn't seem to be anything about the framework itself. Most of the MVC is done by the programmer, am I right? Now, going back to WordPress, could we consider the core rewrite engine (WP_Rewrite) the controller? Queries & plugin logic as the model? And themes as the view? Or am I getting it all wrong?

Wordpress itself is not architected in MVC, but one can build very MVC oriented themes and plugins within the framework. There are several tools which can help:

Wordpress is kinda-sorta MVC. If anything it is a pull-type MVC layout, where the View 'pulls' data from the model. It does this in a very proceedural way, instead of using lots of different objects, but this actually makes the front end templates easier to write in a lot of ways.

This also gives the views some degree of controller logic (thus the kinda-sorta MVC).

Lets run this down: Wordpress gets a URL. The wordpress core acts as a controller and determines what initial queries to run of the database, and by extension, what view should be loaded (category view, single post or page view, etc). It then packages that INTIAL query response and sends it to the view file.

Thus, when the view sees code to load a sidebar or widget area, it asks for that information. However, what widgets should be there is determined by the controller, which looks at the model for what widgets are in the sidebar, and then selects those that are set to show on the current page, and returns those to the view.

That each part of that isn't an object doesn't make this any less MVC. You can alter WP core without (necessarily) altering anything about a theme. Similarly, as long as you use built in functions like 'get_pages()' then the model and the database tables could change as long as those functions still returned the right data. So, the model is independent of the view, and the controller is independent as well (except when the view adds controller logic to do more than the core normally does).

While you COULD have a model object holding a number of methods and stuff like WPModel::get_pages('blah blah'), and contain everything that way, there is still fundamental separation of concerns.

As long as the names, arguments, etc, stay the same (or just have new ones added) then separation of concerns is maintained and one can be altered without disturbing the others.

It isn't a super-clean version of MVC, (especially when hooks get involved), but at a basic level it starts there.

And being proceedural about it isn't a bad thing IMO. A request from a website is pretty inherently proceedural: it is a process with a clear beginning and end, and just needs a procedure to process the request, get data, package it, then die. You can set up those steps with objects and object methods and OOP layouts (which would make some things easier) or you can just write alot of function calls and separate them out that way. Class members like private variables are lost that way but depending on the needs of the application... you might not care.

There is no one-grand-way to do development, and WP sits at like 20% of websites so it is doing something right. Probably something to do with not making people have to learn/memorize complex class hierarchies to get the database to answer the question 'what pages are child of page x?' and deal with that data. Could you make it that easy with OOP? yes, but if Joomla is any example of how hard it is to implement a complex custom website with OOP, then WP is FAR easier and quicker, and time is money.

As already mentioned in the comments, MVC is an architectural design pattern, not a specific framework, and no, Wordpress doesn't follow the MVC pattern.

There is a separation of views (templates) from the programming logic, but only in the frontend, not in the admin panel and a general separation of views and application logic is not inevitably MVC. An implementation of the MVC pattern usually assumes some kind of object oriented programming paradigm behind it and Wordpress is mainly implemented in a procedural way, with plain SQL queries in the PHP functions, therefore not having an actual model either.

One of the topics that periodically crops up in discussions as it relates to WordPress is the idea of WordPress and MVC.

But the thing is that MVC is not the silver bullet of web development that we try to make it out to be. Yes, it’s an awesome design pattern, and I personally think that it fits the web application model like a glove, but not every framework or platform implements that design pattern.

Case in point: WordPress is not MVC.

And that’s okay. I think we need to leave the desire of trying to shoehorn it into our projects aside especially when the pattern WordPress provides is not only sufficient, but works well when leveraged correctly.

So do I! In fact, I spent the last year working on a project that more-or-less mimicked the MVC architecture. A high-level example of MVC. 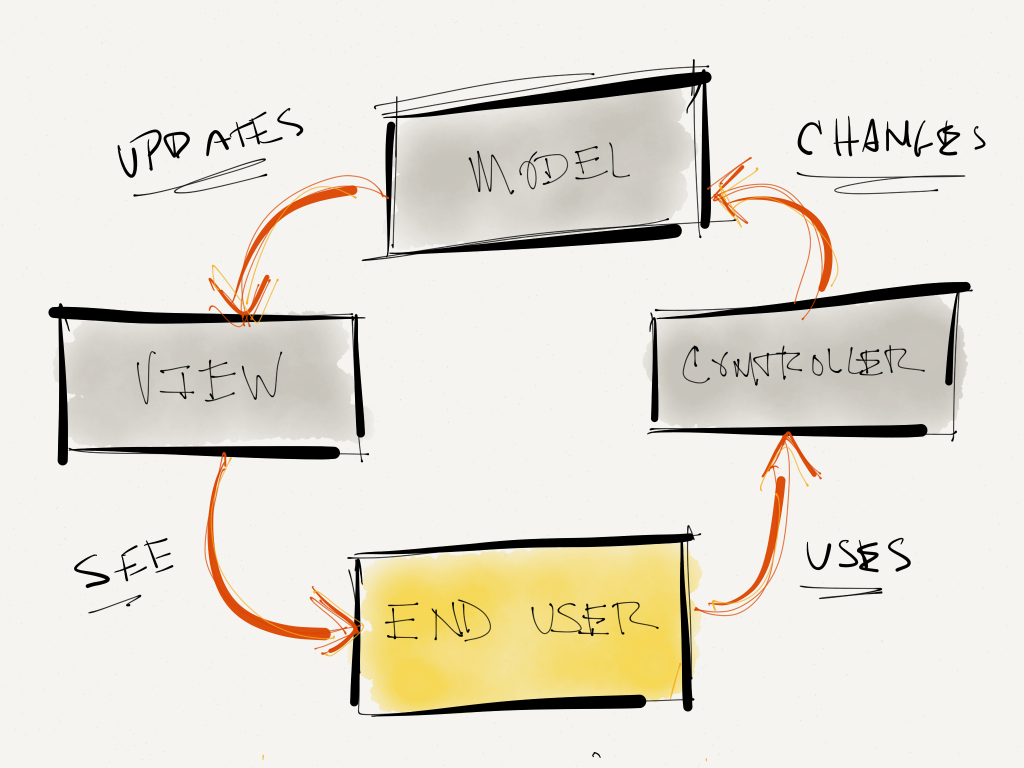 A high-level example of MVC.

Finally, a set of rewrite rules gave the application a clean set of predictable URLs in the format of /people/update/1 or /people/all. What Pattern Does WordPress Implement?

WordPress implements the event-driven architecture (of which there are several variations such as the Observer Pattern).

In short, you can conceptually think of this as the following:

Not too complicated, is it? A high-level example of event-driven patterns 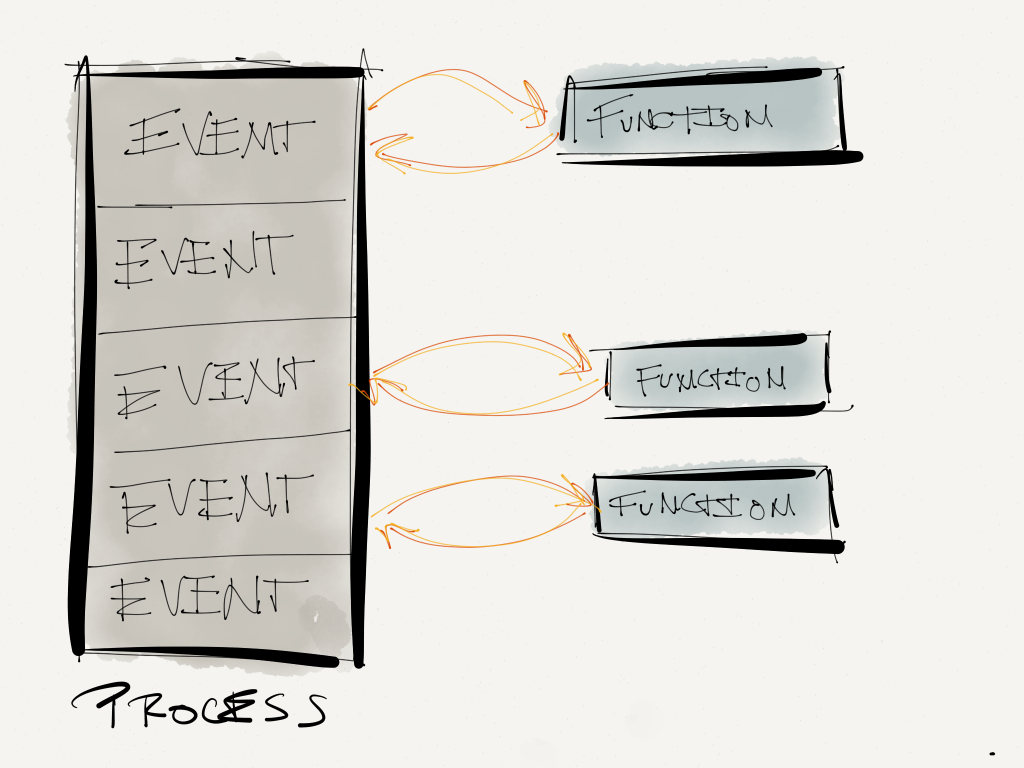 A high-level example of event-driven patterns

When you begin to think in terms of the paradigm in which it works rather than trying to make it work the way that you want it to work, it’s liberating. It helps to solve problems much more easily.

The bottom line is this: WordPress implements the event-driven design pattern, so even if you end up trying to implement MVC, you’re still going to have to utilize the hook system.

If you’re not careful, you can end up trying to craft the perfect architecture without actually getting your work done, and thus end up finding yourself so high up in the atmosphere of software that you’ve effectively become an architecture astronaut. So You’re Saying Avoid Design Patterns?

Not at all! Design Patterns serve a purpose because, above all else, they basically give us solutions to previously and commonly solved problems. Use them!

But the point I’m trying to make is that we don’t need to try to force things to fit pattern just because we like the pattern. That’s not their purpose. Instead, leverage the primary pattern that your platform of choice implements – in our case, it’s an event-driven pattern – and then implement patterns where they fit (such as dependency injection or something like that).

Otherwise, it’s like trying to put your foot in a glove.

Just to update this with more recent information for people hitting this from search engines - the wp-mvc plugin http://wordpress.org/extend/plugins/wp-mvc/ goes a long way to creating a mvc framework for plugin development. You can find out more here: http://wpmvc.org/documentation/70/tutorial/

Just to add to the list of options, (I'm admittedly biased as the author,) swpMVC is a fully featured, lightweight MVC framework, inspired by Rails, Sinatra, Express, and FuelPHP. It's thoroughly documented, and while I have used and enjoyed wp-mvc, I wanted something where the models were able to populate views themselves, including form controls for interacting with said models.

I put this together largely to reduce the amount of controller code required to put together an app on top of WordPress, and the result is a very fast and effective framework that runs inside WordPress. The models are based on PHP Activerecord and 8 models are included for existing WordPress data types, including Post, PostMeta, User, UserMeta, Term, and a few more. Modeling data is very easy thanks to the activerecord library, and I've enjoyed working with this framework immensely thus far.

Also ships with underscore PHP and PHP Quick Profiler (as seen in FuelPHP.)

RokkoMVC is a micro MVC framework built especially for WordPress. The project is meant to simplify AJAX functionality in WordPress applications, as well as bringing in all the other benefits of using models, views, and controllers to your theme.

Of course, I wrote this code thinking that no other WP developer had considered the problem before ;-).

It's far from mvc, there is no kinda-sorta thing like some people say, it's either MVC or not... The fact that you write logic on the view level doesn't qualify it as a mvc framework. The reason people use it - it's easy to learn, you don't need to be hardcore php programmer, they're lazy.

2335
What are MVP and MVC and what is the difference?
636
Can I install/update WordPress plugins without providing FTP access?
20
What makes a framework a "true" MVC framework?
512
MVC pattern on Android
3
intergrating a MVC (php) Framework with a CMS
0
MVC Source Files
61
Can Wordpress be replaced by a Framework like Django or Ruby on Rails?