How to speed up Android Studio on a Mac

I am trying to develop some native Android apps using Android Studio (latest) on OS X Yosemite. Currently Android Studio is simply unusable: it is too slow. I am not referring to the Android emulator, which was doubling the development time, but to the source code editor itself.

The main problem is that very often but not always (I would say almost always) it is not able to keep the pace of my editing: when I edit text, characters appear on the screen between one and two seconds later. If I delete characters, I never know which one I reached without waiting for a couple of seconds. If I right-click I wait for the equivalent of geological ages before something is displayed. It is almost impossible to use the graphical layout editor because it is sloooow.

I have also other problems, related to incredible bugs. But I want to focus on this basic functionality.

After a bit of research I ended up increasing its heap space. So I went into:

and modified these values in studio.vmoptions:

Actually I have only increased the allocated memory for the first two of them.

Is there anyone developing for Android on a Mac who was able to increase this basic performance of Android Studio? Is there any hidden trick, combination of JVM and options able to make this app usable?

I did the following to resolve the Android Studio slowness.

After understanding of @Benjamin and @Marco Hc, I captured a screenshot and tried to represent the solution graphically. Every number in the picture represents the flow of the solution: 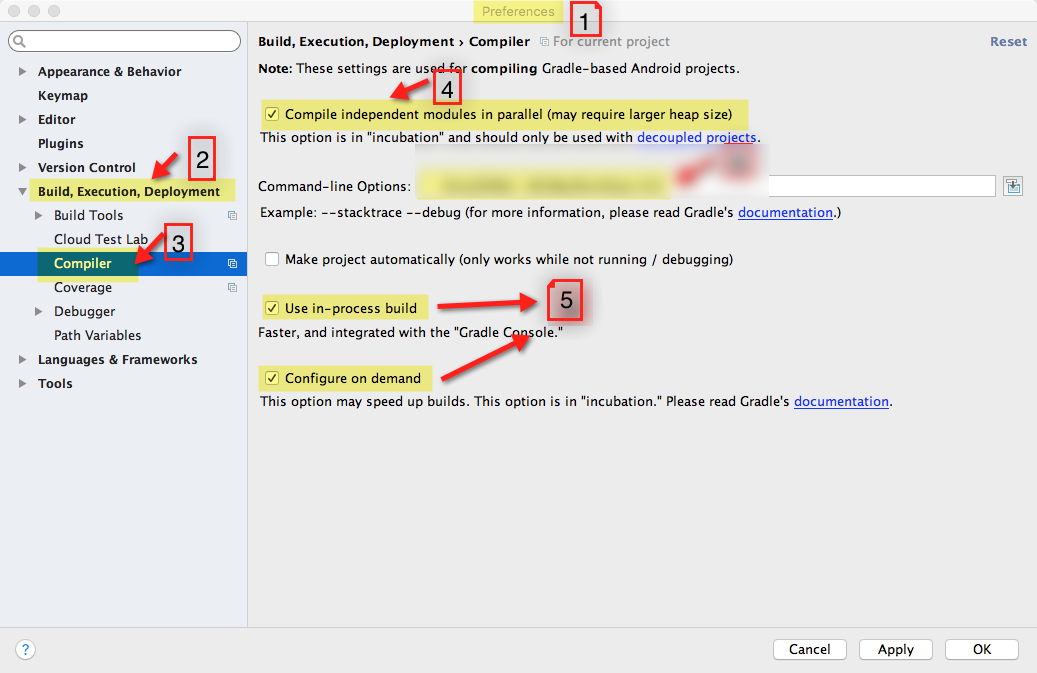 It's more than enough, there are some tricks to improve your Android Studio performance:

With these two tricks you'll feel the difference. Let me know.

Yes, that is enough computer. I use Android Studio on both my Mid 2011 iMac and my MBP 2.5GHz i7. Android Studio and the emulator are pretty slow to load on the iMac, but I do not have the issues while typing that you describe on either machine.

What version of Android Studio are you using?

In my case, I saw that only Android Studio was laggy (problems while typing or using the mouse). The other apps were ok.

I had a look to "activity monitor" and saw in the "processor" and "memory" tabs that some apps regularly induced peaks on the processor graph or memory graph. You can also see that these apps move a lot in the listing (going up and down) during the peaks.

I noticed that the apps inducing peaks were:

My Mac is now much faster and have no more problems with Android Studio ! :)

Something I discovered was having Dictation turned on for the keyboard in System Preferences seems to cause a general loss of action (keyboard entry was dropping characters, clicks seemingly being dropped, window moves not working, etc.).

Now, disable or check off all the plugins which not usable for you.

If you need any plugin later, enable it for a temporary time, do your work and then you can disable it again.

This performance issue may be caused by a cloud backup utility like Google Backup & Sync, iCloud, DropBox, or OneDrive syncing the folder or files as you edit. Try disabling the Cloud Backup daemon or removing those files from sync.

Not the answer you're looking for? Browse other questions tagged android macos or ask your own question.

4053
How do you close/hide the Android soft keyboard programmatically?
3011
How to stop EditText from gaining focus at Activity startup in Android
2905
Is there a unique Android device ID?
2097
What is 'Context' on Android?
2178
Find (and kill) process locking port 3000 on Mac
1580
Who is listening on a given TCP port on Mac OS X?
3777
Proper use cases for Android UserManager.isUserAGoat()?
1143
How to install Java 8 on Mac
1158
How do I “select Android SDK” in Android Studio?