I'm following these instructions to add IP restrictions to an Azure web role, but I'm not able to change the build action "copy to output directory" property for the startup.cmd script. It's grayed out not available. Can anyone explain why this is? Visual Studio 2013 with Kentico application. 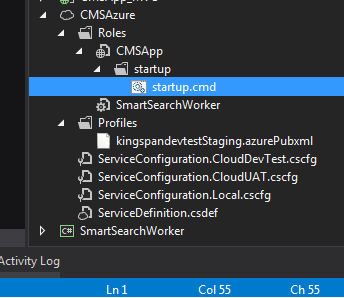 Update 2 - realised I needed to change the "copy to output directory", not build action. Question updated above.

Hm, never tired it before, I always have my startup scripts in my main project. However with this setup, your startup script will be copied automatically to the Approot of the role. That's why no "Copy to output directory".

If we take a closer look to Define Startup Tasks for a Role, we will see a note:

Following that note, the Commandline for your script could look something like:

And this should work. Because your content, as defined by the screenshot is in AppRoot\Startup\startup.cmd. However I have not tested it personally.

Not the answer you're looking for? Browse other questions tagged visual-studio azure azure-web-roles kentico or ask your own question.