Deploying project, created with Eclipse and Maven, to Tomcat

I'm using Eclipse 3.5, Maven 2, m2eclipse and Tomcat 6. So i create Maven project for archetype webapp. This is pom.xml:

So then i want to deploy my web application to Tomcat. What I need to do? Maven install don't help. But if I create war by Maven install, i can import it to eclipse and deploy it to Tomcat by "Add and remove..." in server popup.

This problem can be resolved by using the Tomcat plugin for Maven. Its homepage has got extensive documentation concerning the configuration of the plugin and deployment of war files. 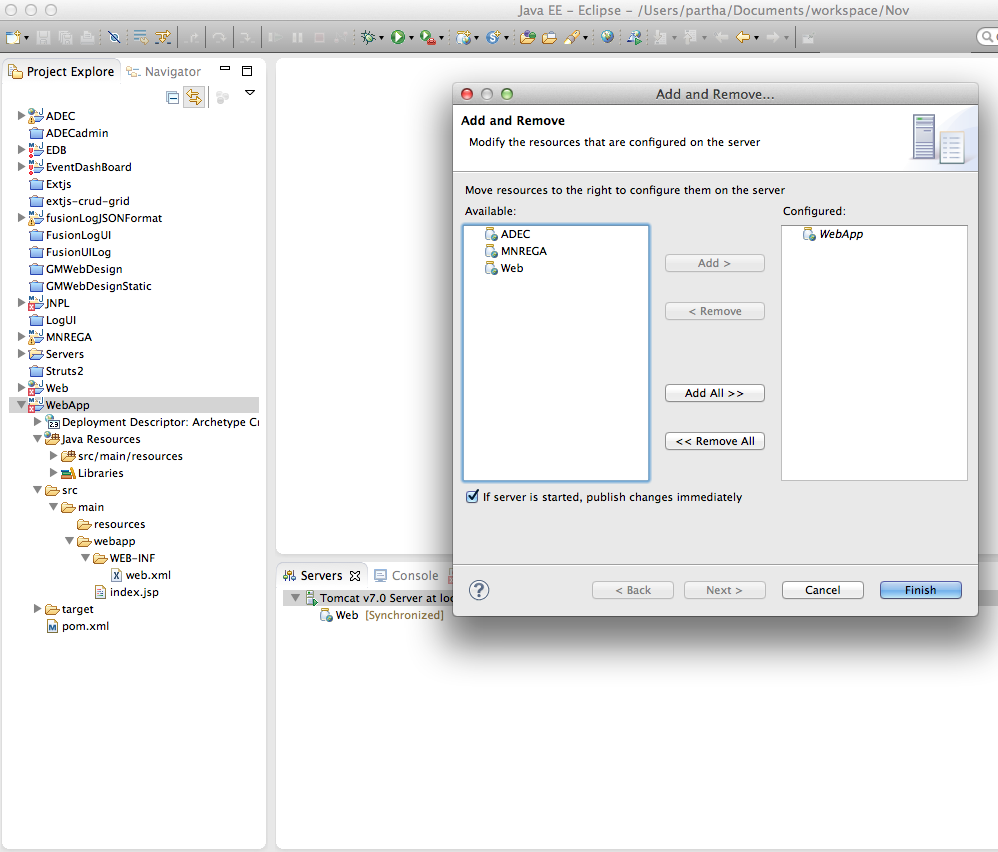 Found out that the tomcat manager url (i am using Tomcat 6.0) is http://localhost:8080/manager/html, while the default used by the mvn tomcat plugin stops at manager in the URL. Add the url specified to your pom.xml as a configuration parameter - (see this url for more details http://mojo.codehaus.org/tomcat-maven-plugin/configuration.html) and voilà it works...

With Tomcat7, I found I needed to set up the URL as http://localhost:8080/manager/html and use a username with a manager-gui role. However, using a username with the manager-script role, with URL http://localhost:8080/manager/text also works and is more appropriate. The manager-script role is the designed way to go for ant/maven scripts.

So then i want to deploy my web application to Tomcat. What I need to do? Maven install don't help. But if I create war by Maven install, i can import it to eclipse and deploy it to Tomcat by "Add and remove..." in server popup.

Since you are using m2eclipse, my recommendation would be to deploy your application using the WTP. Assuming you have the Maven integration for WTP feature installed (from m2eclipse extras) and Tomcat configured as Server, just right-click on your project and select Run > Run on Server...

Another option would be to run your application on Jetty (yes, I know that this is not what you're asking for but this is very valid option if you don't want to use the WTP). Add the following snippet to your pom:

And simply run mvn jetty:run to start an embedded Jetty server and deploy your application on it.

The same can be achieved for Tomcat using the Tomcat Maven Plugin but unless you want to deploy to a remote Tomcat (see the Usage page), I don't see any advantage over the Maven Jetty Plugin.

During development, I would use the first option (deploy with the WTP).

If you want that your war file created by maven, should be deploy on tomcat server directly then this tomcat deployment configuration can help you.

Not the answer you're looking for? Browse other questions tagged eclipse tomcat maven-2 m2eclipse or ask your own question.

2752
How can I create an executable JAR with dependencies using Maven?
6
Maven include JavaDoc Jar in Assembly
1294
'Must Override a Superclass Method' Errors after importing a project into Eclipse
256
Convert Existing Eclipse Project to Maven Project
751
Does a "Find in project..." feature exist in Eclipse IDE?
4
Run Ant task from Maven
5
Unable to create successfully a project using GWT-maven-plugin with gwt 2.2
0
after adding org.apache.poi on pom.xml tomcat server on eclipse is not start