I am trying to print an integer in JavaScript with commas as thousands separators. For example, I want to show the number 1234567 as "1,234,567". How would I go about doing this?

Here is how I am doing it:

Is there a simpler or more elegant way to do it? It would be nice if it works with floats also, but that is not necessary. It does not need to be locale-specific to decide between periods and commas.

I used the idea from Kerry's answer, but simplified it since I was just looking for something simple for my specific purpose. Here is what I have:

@neu-rah mentioned that this function adds commas in undesirable places if there are more than 3 digits after the decimal point. If this is a problem, you can use this function:

@t.j.crowder pointed out that now that JavaScript has lookbehind (support info), it can be solved in the regular expression itself:

I'm surprised nobody mentioned Number.prototype.toLocaleString. It's implemented in JavaScript 1.5 (which was introduced in 1999) so it's basically supported across all major browsers.

It also works in Node.js as of v0.12 via inclusion of Intl

If you want something different, Numeral.js might be interesting.

Below are two different browser APIs that can transform Numbers into structured Strings. Keep in mind that not all users' machines have a locale that uses commas in numbers. To enforce commas to the output, any "western" locale may be used, such as en-US

From what I checked (Firefox at least) they are both more or less same regarding performance.

People have been reporting this doesn't work as expected, so I did a JS Fiddle that includes automated tests.

Here's that fiddle as a Stack Snippet with slightly modified output: 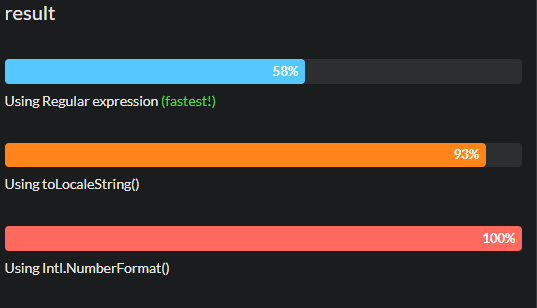 I am quite impressed by the number of answers this question has got. I like the answer by uKolka:

But unfortunately, in some locales like Spanish, it does not work (IMHO) as expected for numbers below 10,000:

See toLocaleString not working on numbers less than 10000 in all browsers to know why.

So I had to use the answer by Elias Zamaria choosing the right thousands separator character:

This one works well as a one-liner for both locales that use , or . as the thousands separator and starts working from 1,000 in all cases.

Gives 1.000 with a Spanish locale context.

Should you want to have absolute control over the way a number is formatted, you may also try the following:

This one does not need a regular expression. It works by adjusting the number to the desired amount of decimals with toFixed first, then dividing it around the decimal point . if there is one. The left side is then turned into an array of digits which is reversed. Then a thousands separator is added every three digits from the start and the result reversed again. The final result is the union of the two parts. The sign of the input number is removed with Math.abs first and then put back if necessary.

It is not a one-liner but not much longer and easily turned into a function. Variables have been added for clarity, but those may be substituted by their desired values if known in advance. You may use the expressions that use toLocaleString as a way to find out the right characters for the decimal point and the thousands separator for the current locale (bear in mind that those require a more modern Javascript.)

Thanks to everyone for their replies. I have built off of some of the answers to make a more "one-size-fits-all" solution.

You would use this as follows:

I found that I often needed to get the number back for math operations, but parseFloat converts 5,000 to 5, simply taking the first sequence of integer values. So I created my own float conversion function and added it to the String prototype.

Now you can use both functions as follows:

I think this is the shortest regular expression that does it:

I checked it on a few numbers and it worked.

Number.prototype.toLocaleString() would have been awesome if it was provided natively by all browsers (Safari).

I checked all other answers but noone seemed to polyfill it. Here is a poc towards that, which is actually a combination of first two answers; if toLocaleString works it uses it, if it doesn't it uses a custom function.

The thousands separator can be inserted in an international-friendly manner using the browser's Intl object:

See MDN's article on NumberFormat for more, you can specify locale behavior or default to the user's. This is a little more foolproof because it respects local differences; many countries use periods to separate digits while a comma denotes the decimals.

Intl.NumberFormat isn't available in all browsers yet, but it works in latest Chrome, Opera, & IE. Firefox's next release should support it. Webkit doesn't seem to have a timeline for implementation.

You can either use this procedure to format your currency needing.

if you are dealing with currency values and formatting a lot then it might be worth to add tiny accounting.js which handles lot of edge cases and localization:

The following code uses char scan, so there's no regex.

Here's a simple function that inserts commas for thousand separators. It uses array functions rather than a RegEx.

Use This code to handle currency format for india. Country code can be changed to handle other country currency.

This is the easiest way I found

You can also use the Intl.NumberFormat constructor. Here is how you can do it.

EDIT: The function only work with positive number. for exmaple:

But to answer the question above toLocaleString() method just solves the problem.

My answer is the only answer that completely replaces jQuery with a much more sensible alternative:

This solution not only adds commas, but it also rounds to the nearest penny in the event that you input an amount like $(1000.9999) you'll get $1,001.00. Additionally, the value you input can safely be a number or a string; it doesn't matter.

If you're dealing with money, but don't want a leading dollar sign shown on the amount, you can also add this function, which uses the previous function but removes the $:

If you're not dealing with money, and have varying decimal formatting requirements, here's a more versatile function:

Oh, and by the way, the fact that this code does not work in some old version of Internet Explorer is completely intentional. I try to break IE anytime that I can catch it not supporting modern standards.

Please remember that excessive praise, in the comment section, is considered off-topic. Instead, just shower me with up-votes.

I Wrote this one before stumbling on this post. No regex and you can actually understand the code.

Let me try to improve uKolka's answer and maybe help others save some time.

You should go with Number.prototype.toLocaleString() only if its browser compatibilty is not an issue.

Just for future Googlers (or not necessarily 'Googlers'):

All of solutions mentioned above are wonderful, however, RegExp might be awfully bad thing to use in a situation like that.

So, yes, you might use some of the options proposed or even write something primitive yet useful like:

The regexp that's used here is fairly simple and the loop will go precisely the number of times it takes to get the job done.

And you might optimize it far better, "DRYify" code & so on.

(in most situations) would be a far better choice.

The point is not in the speed of execution or in cross-browser compatibility.

In situations when you'd like to show the resulting number to user, .toLocaleString() method gives you superpower to speak the same language with the user of your website or app (whatever her/his language is).

This method according to ECMAScript documentation was introduced in 1999, and I believe that the reason for that was the hope that the Internet at some point will connect people all around the world, so, some "internalization" tools were needed.

Today the Internet does connect all of us, so, it is important to remember that the world is a way more complex that we might imagine & that (/almost) all of us are here, in the Internet.

Obviously, considering the diversity of people, it is impossible to guarantee perfect UX for everybody because we speak different languages, value different things, etc. And exactly because of this, it is even more important to try to localize things as much as it's possible.

So, considering that there're some particular standards for representation of date, time, numbers, etc. & that we have a tool to display those things in the format preferred by the final user, isn't that rare and almost irresponsible not to use that tool (especially in situations when we want to display this data to the user)?

For me, using RegExp instead of .toLocaleString() in situation like that sounds a little bit like creating a clock app with JavaScript & hard-coding it in such a way so it'll display Prague time only (which would be quite useless for people who don't live in Prague) even though the default behaviour of

is to return the data according to final user's clock.

Some corrections by @Jignesh Sanghani, don't forget to upvote his comment.

For anyone who likes 1-liners and a single regex, but doesn't want to use split(), here is an enhanced version of the regex from other answers that handles (ignores) decimal places:

The regex first matches a substring starting with a literal "." and replaces it with itself ("fract"), and then matches any digit followed by multiples of 3 digits and puts "," after it.

I think this function will take care of all the issues related to this problem.

If you're looking for a short and sweet solution:

Why NOT satisfied with other answers?

There is no best of all and it should be chosen based on the need. My priority of sorting;

With these much options of the native functions, we still can not expect:

So you maybe need a function like any of these:

formatNums() (Compatibility - Ease of use)

Play with the examples here: https://jsfiddle.net/PAPIONbit/198xL3te/

Check the RegEx (Without the necessary function) : https://regexr.com/66ott

Best choose if The input is Specified / Predefined. (Like usual prices that sure will not have more than 3 decimals) (~65% faster than toLocaleString)

If your client going to use Persian/Arabic numbers for input as what is usual in Iran, I think the best way is instead of keeping the original characters, convert them to English before you deal with, to you can calculate it.

And for still showing them as original looking there is 2 ways:

My Old-school function on this post: (~15% Faster than toLocalString)

Not the answer you're looking for? Browse other questions tagged javascript formatting numbers integer or ask your own question.

117
Javascript Thousand Separator / string format
11
Convert a JavaScript number to a currency format, but without "$" or any currency symbol
3
javascript - Add thousand seperator and retain decimal place
0
Javascript Function to Format as Money
2
Javascript regex: make different spaces depending on lenght: 1 000, 10 000, 100 000
-1
I want to change this format, '$1,000,000', to '1000000'
4
JavaScript Math Function: How to Format Answer w/ Comma in Thousandths Place
1
How to format clean numbers so 1000 appear as 1.000,00
-2
formatting integer into string numbers in jQuery
0
how can i add a comma to a number in it's 1000 to this counter script
See more linked questions