How does Spark partition(ing) work on files in HDFS?

I'm working with Apache Spark on a Cluster using HDFS. As far as I understand, HDFS is distributing files on data-nodes. So if a put a "file.txt" on the filesystem, it will be split into partitions. Now I'm calling

from Apache Spark. Has rdd now automatically the same partitions as "file.txt" on the filesystem? What happens when I call

where x > then the partitions used by hdfs? Will Spark physically rearrange the data on hdfs to work locally?

Example: I put a 30GB Textfile on the HDFS-System, which is distributing it on 10 nodes. Will Spark a) use the same 10 partitons? and b) shuffle 30GB across the cluster when I call repartition(1000)?

When you call rdd.repartition(x) it would perform a shuffle of the data from N partititons you have in rdd to x partitions you want to have, partitioning would be done on round robin basis.

If you have a 30GB uncompressed text file stored on HDFS, then with the default HDFS block size setting (128MB) it would be stored in 235 blocks, which means that the RDD you read from this file would have 235 partitions. When you call repartition(1000) your RDD would be marked as to be repartitioned, but in fact it would be shuffled to 1000 partitions only when you will execute an action on top of this RDD (lazy execution concept)

When reading non-bucketed HDFS files (e.g. parquet) with spark-sql, the number of DataFrame partitions df.rdd.getNumPartitions depends on these factors:

A rough estimation of the number of partitions is:

The exact calculations are slightly complicated and can be found on the code base for FileSourceScanExec, refer here. 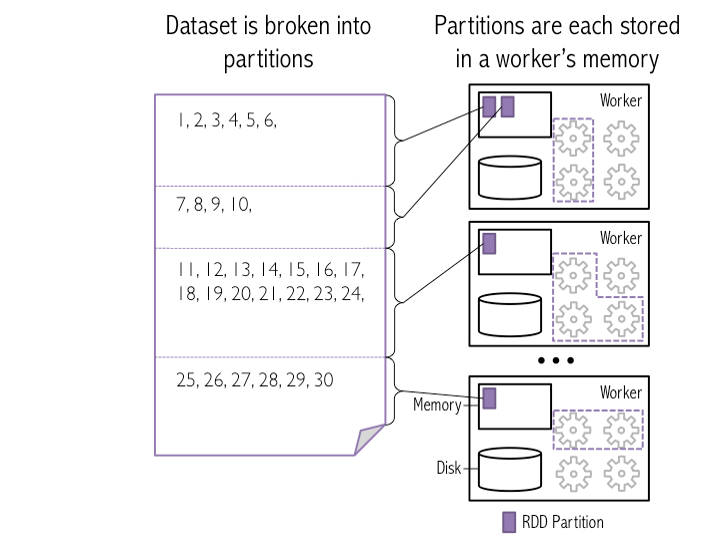 Example: I put a 30GB Textfile on the HDFS-System, which is distributing it on 10 nodes.

a) use the same 10 partitions?

Spark load same 10 HDFS bocks to workers memory as partitions. I assume block size of 30 GB file should be 3 GB to get 10 partitions/blocks (with default conf)

b) shuffle 30GB across the cluster when I call repartition(1000)?

Yes, Spark shuffle the data among the worker nodes in order to create 1000 partitions in workers memory.

Addition to @0x0FFF If it take from HDFS as input file it will calculate like for this rdd = SparkContext().textFile("hdfs://.../file.txt") and when you do rdd.getNumPatitions it will result Max(2, Number of HDFS block). I did lot of experiments and found this as result. Again explicitly you can do rdd = SparkContext().textFile("hdfs://.../file.txt", 400) to get 400 as partitions or even can do re-partitions by rdd.repartition or decrease to 10 by rdd.coalesce(10)

Not the answer you're looking for? Browse other questions tagged apache-spark hdfs or ask your own question.

2
How Apache Spark partitions data of a big file
18
Spark RDD - is partition(s) always in RAM?
7
Reading CSV file in Spark in a distributed manner
4
having Spark process partitions concurrently, using a single dev/test machine
7
What is the difference between partitioning and bucketing in Spark?
4
Would zipWithIndex after sc.textFile give the correct line numbers?
3
How many partitions Spark creates when loading a Hive table
3
How to improve Spark performance?
2
How does Spark partition's HDFS files?
2
Spark RDD partitions vs. Hadoop Splits
See more linked questions