How to store releases/binaries in GitLab?

I am building a workflow with Gitlab, Jenkins and - probably - Nexus (I need an artifact storage). I would like to have GitLab to store releases/binaries - is it possible in a convenient way?

I would not like to have another service from which a release (and documentation) could be downloaded but to have it somehow integrated with repository manager, just like releases are handled in e.g. GitHub. Any clues?

If you aren’t currently using GitLab for your releases because you can’t attach binaries to releases, your workflow just got a lot simpler.

You now have the ability to attach binaries to a release tag from the gitlab.ci-yml. This extends support of Release Assets to include binaries, rather than just asset links or source code. This makes it even easier for your development teams to adopt GitLab and use it to automate your release process. 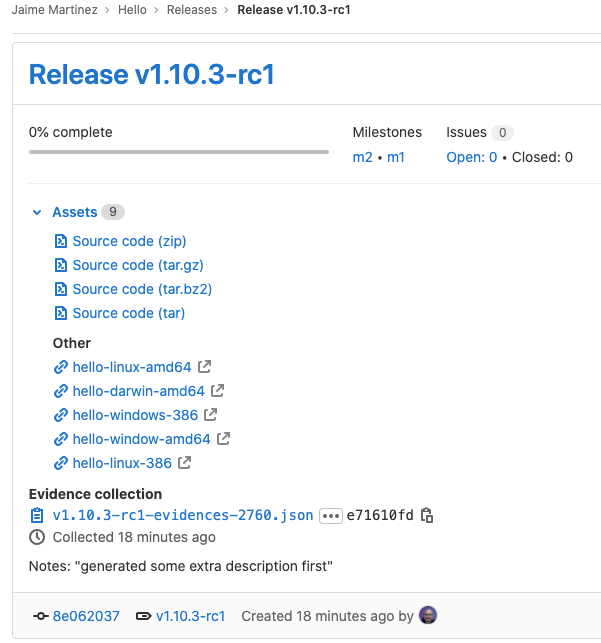 With its API, you now can create and update a relase associated to a tag.
For now, it is only the ability to add release notes (markdown text and attachments) to git tags (aka Releases).

Update May 2019: GitLab 1.11 introduces an interesting "Guest access to Releases":

It is now possible for guest users of your projects to view releases that you have published on the Releases page.
They will be able to download your published artifacts, but are not allowed to download the source code nor see repository information such as tags and commits.

This is in progress, and suggested in suggestions 4156755:

We’re accepting merge requests for the minimal proposal by Ciro:

The comments to that suggestion include:

What makes it more interesting is the next step.
I would really like a way to let public download artifacts from "releases" without being able to access source code (i.e. make sources private for project team only except anything else like wiki, "releases", issue tracker).

However, such additional feature looks more generic and I submitted a separate feature request for that.

Nevertheless, I repeat my point here:
While the simplistic version of "releases" is still nice to have, many people can easily set up external file server and point URLs in release/tag description to this server outside GitLab.
In other words, "releases" may not look attractive now without some future picture of integration.

This answer is going to be basically the same, as the one from VonC, just described in a step-by-step manner for less experienced CI users.

So, let's say, that you have a really cool commit 30728cab and you'd like to make this version of your code a new release...

1) Create a tag for your commit

After this command you'll be asked to fill in a description, just like when you're committing new changes to your code.

2) Push the tag to your remote repository

Tag are NOT going to be pushed there automatically with your commits! You need to push them manually to your remote.

Now you can either a) upload a file to the GitLab repository, b) upload it anywhere else and save the link in both cases.

WARNING: Files uploaded to the GitLab repository can't be easily deleted then and you can't see their link later!

While I'm NOT recommending uploading binaries to the repository because of the reason above, you asked for it, so here is the way:

The private token can be created in User settings -> Access tokens.

Now we can finally tie it all together using Release.

You can see, that Release is inherently tied with a specific tag, which is subsequently tied to a specific commit. Connection with binaries is then performed simply by providing links to those files.

The funny point is, that your description supports Markdown, but it's really hard to write some larger *.md document in such cumbersome one-liner. So I've written a short Bash script, which allows us to write the Markdown file aside and then it reads it and sends it automatically:

And now that's it! You have your first complete release!

Until you realizes, that you've made a terrible typo in the header of your release description...

5) Delete a release (if needed)

Here you're lucky! Unlike uploaded binaries you can delete your releases using the REST API, too!

And as it is still pretty annoying to type this several times in a row, I've made another Bash script:

I am using a command line tool I've written in python as a shortcut. Does some steps of the API methods described in previous answers (Upload, Release, Delete Release).

You can check the source code or just use it yourself.

For even simpler version, if anyone is interested in doing these with python and requests.py; it is pretty trivial.

For Creating a Release

JSON Response is the release.

For the other steps basically follow API guidelines and make the adjustments. All of them are pretty similar.

We're using scp to copy files, such as binaries or reports, generated in GitlabCI.

Gitlab (server) itself is for git repositories. You are not supposed to store binaries in git. Nexus would here the way to go. You might add a link to nexus in your repositories description or readme file (like you can point there to your jenkins build, too).

You might want to take a look into GitLab Continuous Integration which integrates with Gitlab. That seems to be more something like Jenkins. I do not know if it comes with a data storage like Nexus.

Not the answer you're looking for? Browse other questions tagged git jenkins gitlab nexus or ask your own question.

108
How to create releases in GitLab?
45
How do I make a releases, builds, and/or snapshots with BitBucket?
5
Create releases from within a GitLab runner/pipeline
3
How can I delete binaries attached to a tag/release in GitLab?