The JUnit framework contains 2 Assert classes (in different packages, obviously) and the methods on each appear to be very similar. Can anybody explain why this is?

The old method (of JUnit 3) was to mark the test-classes by extending junit.framework.TestCase. That inherited junit.framework.Assert itself and your test class gained the ability to call the assert methods this way.

Since version 4 of JUnit, the framework uses Annotations for marking tests. So you no longer need to extend TestCase. But that means, the assert methods aren't available. But you can make a static import of the new Assert class. That's why all the assert methods in the new class are static methods. So you can import it this way:

After this static import, you can use this methods without prefix.

At the redesign they also moved to the new package org.junit that follows better the normal conventions for package naming.

Prefer the newest one, especially when running JDK5 and higher with annotation support.

There is in fact a functional change: org.junit.Assert will complain if you use the two-argument assertEquals() with float or double, while junit.framework.Assert will silently autobox it.

I did a rough source code compare and there are no serious changes. A lot of comments were added in org.junit.Assert and some refactorings are done. The only change is the comparison with Arrays. There are some code cleanups, but there's (imho) no functional change.

In Android Studio (and so in IntelliJ too), you can globally exclude junit.framework from auto-import proposal.

You can set the scope between IDE or Project. If you don't have projects which use JUnit 3 you can safely stay with IDE scope. 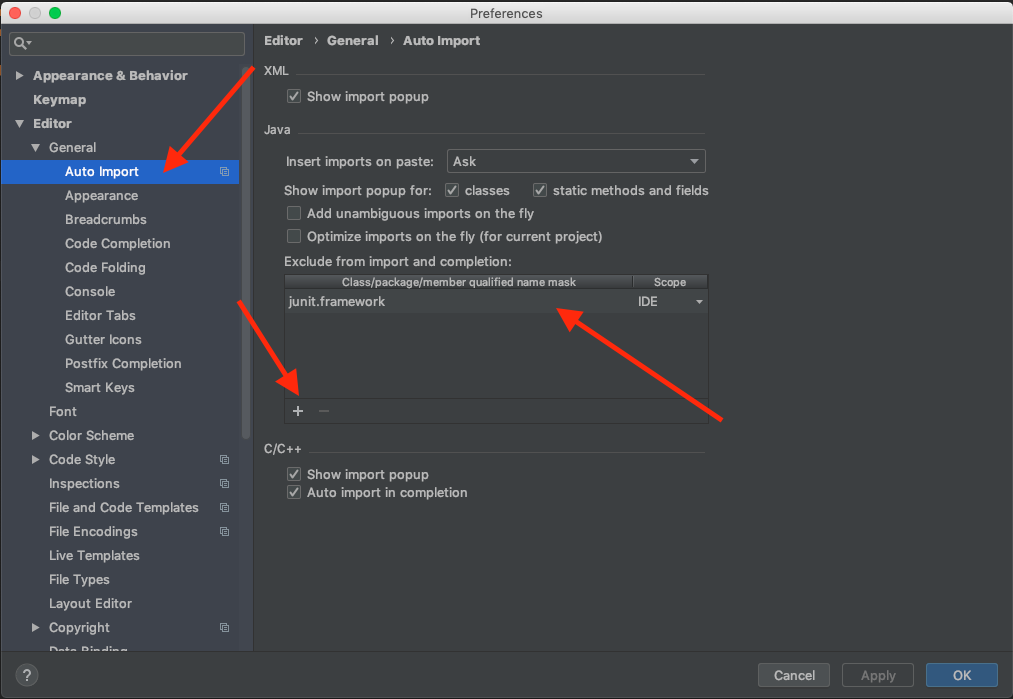 Not the answer you're looking for? Browse other questions tagged java unit-testing junit junit4 assert or ask your own question.

4
JUnit which assertEquals should I use?
2
Which JUnit package to use on Assert?
178
Warning: The method assertEquals from the type Assert is deprecated
32
JUnit java.lang.NoSuchMethodError: junit.framework.ComparisonFailure.getExpected()Ljava/lang/String
21
Difference between org.junit.Test and junit.framework.Test packages

3060
How do I test a class that has private methods, fields or inner classes?
4142
What are the differences between a HashMap and a Hashtable in Java?
2188
How do you assert that a certain exception is thrown in JUnit 4 tests?
861
What's the difference between faking, mocking, and stubbing?
443
Why doesn't JUnit provide assertNotEquals methods?
1744
Why use getters and setters/accessors?
1292
'Must Override a Superclass Method' Errors after importing a project into Eclipse
367
How do I assert my exception message with JUnit Test annotation?
1335
What is the use of "assert" in Python?
26382
Why is processing a sorted array faster than processing an unsorted array?