Does one need to have a license for fonts if we are using ttf files in itext? [closed]

I understand that itext does not come with any of the font libraries and you need to provide the font library . The pdf once generated, will be viewed by Acrobat and assuming , it is the standard fonts, adobe would have support for it. My questions is about licensing of the fonts.

a) Do I need to have a license of the fonts which I am using in iText ? For eg if I am using Arial, one of the most commonly used font and which is not free, do I need to purchase the font ?

b) If I using any specific font for eg STSONG.ttf , for Chinese characters, do I need to have a license for this ?

There is a general question How to use web-fonts legally? on StackOverflow that was closed as off-topic, yet some answers are interesting.

I have different font examples in the sandbox and for every font I use, I look at the corresponding license. If you check the overview, you'll see that I have fonts with a SIL license, an Apache license, and so on... I don't know about STSONG.ttf, so you'll have to check which license applies.

However, you probably didn't obtain the font from Monotype. It was probably shipped with your legal copy of Microsoft Windows, and Monotype may have licensed its fonts to Windows under a license that is less strict.

Let's check which license applies by right clicking a font file such as arial.ttf in C:\windows\fonts and let's inspect the Properties: 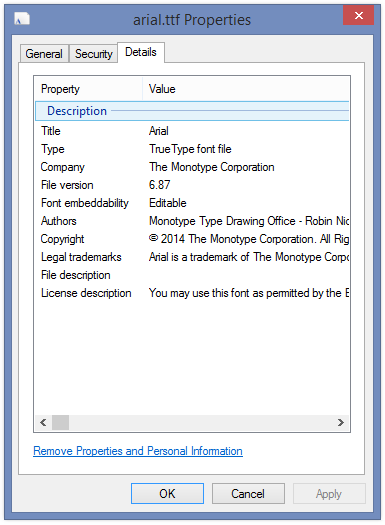 I am in luck: in my case, the Font embeddability says "Editable". This means that I can embed the font in a document not only to print and (pre)view the document, but also to edit the document (e.g. edit form fields) as long as I use arial.ttf in the context of the Windows license that I bought. I can not copy arial.ttf to another computer.

Note that you shouldn't assume that was always the case. For instance if we look at Arial Unicode, we see that older versions only allowed print and preview embedding, whereas editable embedding was allowed only for version 1.00 and higher. You should really check the properties of each font you are planning to use.

If you need a font that can be distributed, you should look for an alternative font that has an open font license. I use FreeSans in the sandbox examples, but there are other free alternatives.

Not the answer you're looking for? Browse other questions tagged fonts licensing itext font-embedding or ask your own question.

108
How to use web-fonts legally?
6
iText pdf not displaying Chinese characters when using NOTO fonts or Source Hans
1
How to reuse font from one pdf in another in iText7?
0
Merging multiple PDFs using iText PdfCopy in JAVA