I've committed a bunch of commits to a project on Github, however I realized I hadn't set up the proper email and committer full name on the computer I'm currently using to make my commits and therefore the users avatar and email address are not there.

How can I rewrite all past commit email and usernames?

You can add this alias:

To change the author name:

or the email for only the last 10 commits:

If you have already pushed some of your commits to the public repository, you do not want to do this, or it would make an alternate version of the master's history that others may have used. "Don't cross the streams... It would be bad..."

That said, if it is only the commits you have made to your local repository, then by all means fix this before you push up to the server. You can use the git filter-branch command with the --commit-filter option, so it only edits commits which match your incorrect info, like this:

...to push the changed history on the original repository use:

The above command (note the plus) forces rewriting the history on the original repo as well. Use with caution!

Again, WARNING: this will make ALL commits as committed by Newname/newemail! The scenario is where you have a repo with only one author who committed using different identities by mistake and you want to fix it.

this totally worked for me. After git push, make sure to see update on git's web portal. If the commit was still not linked to my account, shown default thumbnail image next to the commit and it was not reflected on my contributions timeline chart, go to the commit url and append .patch at the end of the url, and verify the name and email are correct.

If repository is original, w/o remote, you will have to add --force to force rewrite. (You may want to create backup of your repo before doing this.)

If you do not want to preserve refs (they will be displayed in branch history of Git GUI), you will have to add --replace-refs delete-no-add.

For those that just want the easy copy paste version (aside from updating emails and names):

The answers already present are complete. But are you sure, you need those? For eg. I was facing a similar issue but the answers here were overkill for that case. My case and the solution are described below:

Find the option to add the email in the Emails section on the settings page. 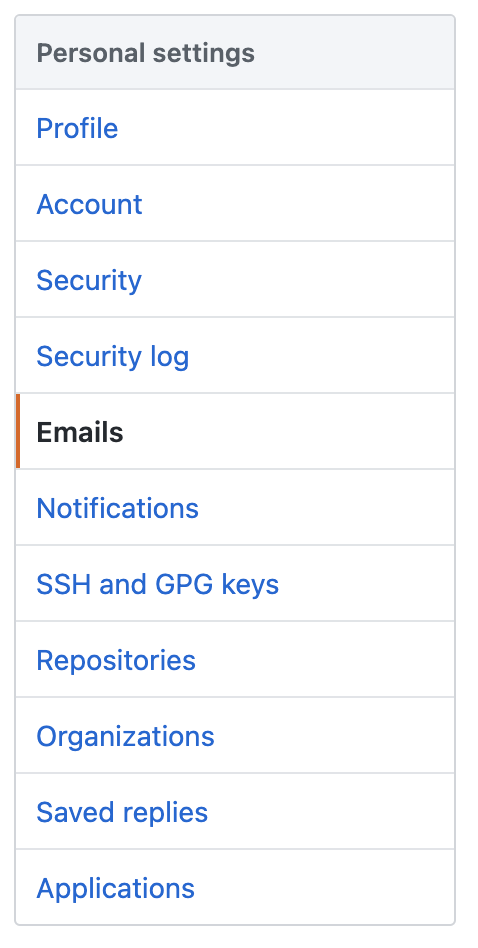 The first three steps mentioned on the github page will be enough.

An alternative to rewriting the history, if you mainly care about the local repo display names, is the .mailmap file, which is basically a list of names and emails. For example, placing this in a .mailmap file in the root of a repo:

will result in any commits attributed to tamkia@somejob.com being shown with the name Tamika Page, regardless of the Committer Name, commits attributed to Orlando Jackson <orlando.jackson@otherjob.com> being displayed as Orlando Cervantes, and the pesky <jared@desktop.(none)> commits being attributed to jared.michael@gmail.com. For full details, check out the git documentation for this feature - since it is built into git it should work for any reasonably new git client.

There's a big caveat here though: while it's been supported for quite a while in the official git client, support in various git implementations, notably the big web interfaces, isn't guaranteed - see this question, where consensus on whether GitHub respects it is mixed but seems negative. I threw together quick test repos on GitHub and GitLab and neither seem to pay attention to .mailmap, unfortunately.

As mentioned in @paradocslover's answer, the services have their own interfaces to do similar things, but you have to set that up per-service, and it won't affect your local copy at all. Because .mailmap is part of the repo, it will work locally for anyone who clones your repo (you can clone the repos linked above to see for yourself), but it seems it won't show in the web interfaces I tested.

For some cases you do want to rewrite the history, of course, but that can be rather invasive and comes with all the standard caveats, so for some situations it's nice to have this option, which may be sufficient, especially if rewriting isn't practical.

3
How do you remove or change your git user.name from historical github commits?
2758
How to change the author and committer name and e-mail of multiple commits in Git?
196
Remove refs/original/heads/master from git repo after filter-branch --tree-filter?
144
Purging file from Git repo failed, unable to create new backup
5
Changing git author info on all commits worked on one of my repos but not the others, why?
4
Why does git log show my password?
10
Does GitHub consider .mailmap for contribution graph
7
GitHub "Your Contributions" and private repositories
4
Anonymise a Github repository
4
My commits on GitHub are not from "my" user
See more linked questions