I've been trying to get the emulator to work for days. Previously I tried the Windows Phone 8.1 Emulator as well as the Windows 8.1 Simulator and both were stuck at loading the OS. 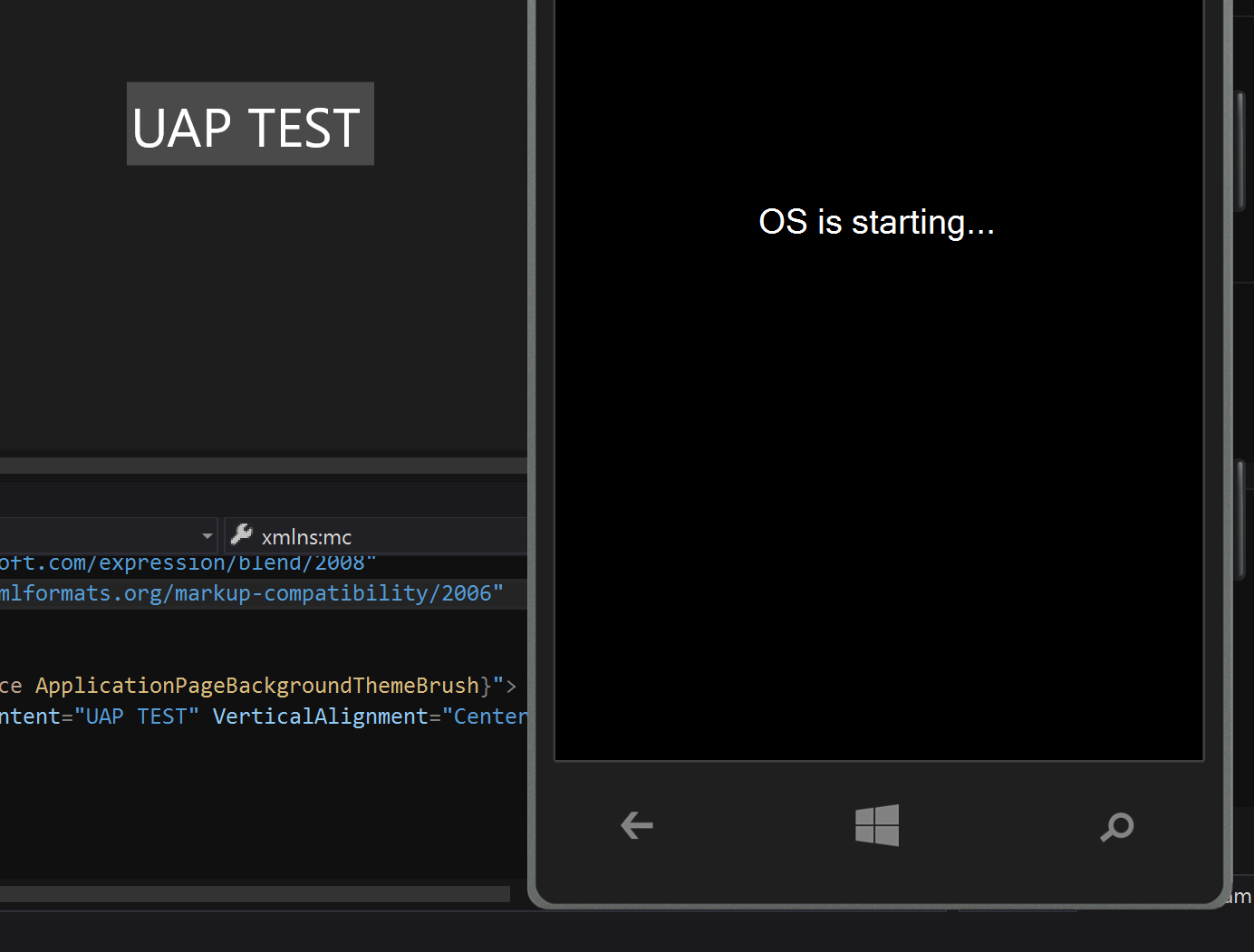 What's strange is that, the Hyper-V Manager seems to be doing OK. I can see the app displays correctly on the little Preview window (see the box on the left side of the picture below).

Also, breakpoints are hit, the project seems to be running OK.

As many answers have already suggested, I tried letting it running for an hour, but still nothing came up.

Things that I've also tried include uninstalling all the Virtual Machines as well as repairing the WP 8.1 Emulator, nothing has worked so far.

Please help, this has driven me completely insane. :(

Not sure if this would help, but if I change the Windows Phone Emulator Internal Switch to use Private network instead of Internal, I will get a couple of warnings saying Unable to determine the Host IP address and then the Emulator will show up with the Emergency Call screen. Not much I can do from there as the three buttons on the bottom are not functioning at all.

I understand that changing the connection type is not the right way to do it, but this at least tells me that the Emulator can work, it's just a matter of how.

I believe you have two Windows Phone Internal Switch connections and one seems to be unplugged while the other is running. Disable the one that is unplugged and leave the latter. This worked for me after 2days of tinkering. God speed.

Attempt to start the Windows Phone emulator VM from within Hyper-V Manager or Visual Studio.

I solved this problem by simply adding XDE.EXE as an exception to my Windows Firewall.

Many times it is not stuck. It just does take too long to start. I have an 8 core processor and it took like 5 minutes to launch, I tought it was stuck but it did launch.

Not sure if this would help, but if I change the Windows Phone Emulator Internal Switch to use Private network instead of Internal, I will get a couple of warnings saying Unable to determine the Host IP address and then the Emulator will show up with the Emergency Call screen. Not much I can do from there as the three buttons on the bottom are not functioning at all.

when you set it to private network, Windows can't interact with your WP Emulator. Open Network Adapter, and try disable and try start emulator again, then enable again this adapter if it is not work *

I contacted the Visual Studio Team a couple of weeks ago and looks like they have fixed this issue in the latest update. And here is how I finally got it all working.

That's all! After all these are done, both my Simulator and Emulator are loading up fine.

In my case, deleting the internal switch from Hyper-V virtual switch manager helps, whenever you run your app using emulator as the target, it'll add a new internal switch by itself and the emulator will run normally (no longer stuck on loading screen)

The problem is, I have to do it every single time I restart my PC

The workaround steps to install the Windows SDK and Emulator are no longer needed.

New setups should no longer encounter this issue.

2 days, tried all that is posted here but nothing worked! Finally, since it is a lot easier nowadays to (re)install windows without loosing your files (3 hours including updates), I just resorted to that. Same thing happened, but then I saw the alert that I had not yet activated my VS to run in developer mode :) Did that, and voila, the emulator now works.

If this might be helpful: my problem started when I installed Android Studio and disabled Hyper-V from Android. Enabling it back for VS just couldn't get me to run it again. But I hear there is a way to run both Android & VS emulators using VS emulator for Android. I will try to see how that works later...

I know the question is old, but none of the above answers worked for me so I write down my two cents: