There are a few minor places where code for my project may be able to be drastically improved if the target framework were a newer version. I'd like to be able to better leverage conditional compilation in C# to switch these as needed.

Do any of these symbols come for free? Do I need to inject these symbols as part of the project configuration? It seems easy enough to do since I'll know which framework is being targeted from MSBuild.

How are people handling this situation? Are you creating different configurations? Are you passing in the constants via the command line?

One of the best ways to accomplish this is to create different build configurations in your project:

And in one of your default configurations:

Which would set the default if it wasn't defined anywhere else. In the above case the OutputPath will give you a separate assembly each time you build each version.

Then create a AfterBuild target to compile your different versions:

This example will recompile the entire project with the Framework variable set to NET20 after the first build (compiling both and assuming that the first build was the default NET35 from above). Each compile will have the conditional define values set correctly.

In this manner you can even exclude certain files in the project file if you want w/o having to #ifdef the files:

An alternative that is working for me so far is to add the following to the project file:

This takes the value of TargetFrameworkVersion property, which is like "v3.5", replaces the "v" and "." to get "NET35" (using the new Property Functions feature). It then removes any existing "NETxx" value and adds it to the end of the DefinedConstants. It may be possible to streamline this, but I haven't got the time to fiddle.

Looking on the Build tab of the project properties in VS you will see the resulting value in the conditional compilation symbols section. Changing the target framework version on the Application tab then changes the symbol automatically. You can then use #if NETxx preprocessor directives in the usual way. Changing the project in VS does not seem to lose the custom PropertyGroup.

Note that this doesn't give seem to give you anything different for the Client Profile target options, but that's not an issue for me.

I had problems with these solutions, possibly because my initial constants were pre-built by these properties.

Visual Studio 2010 also threw up an error because of the semi-colons, claiming they are illegal characters. The error message gave me a hint as I could see the pre-built constants seperated by commas, eventually followed by my "illegal" semi-colon. After some reformatting and massaging I was able to come up with a solution that works for me.

I would post a screenshot of the Advanced Compiler Settings dialog (opened by clicking the "Advanced Compile Options..." button on the Compile tab of your project). But as a new user, I lack the rep to do so. If you could see the screenshot, you would see the custom constants auto-filled by the property group and then you'd be saying, "I gotta get me some of that."

EDIT: Got that rep surprisingly fast.. Thanks guys! Here's that screenshot: 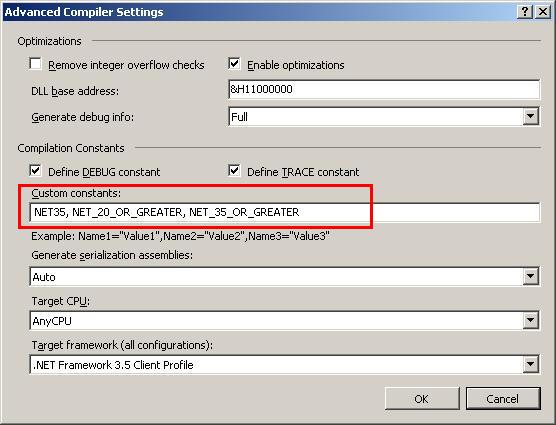 Begin with clearing the constants:

Next, build up your debug, trace and other constants like:

I think this approach is very readable and understandable.

Do this for both Debug and Release build configurations. Then use in your code:

@Azarien, your answer can be combined with Jeremy's to keep it at one place rather than Debug|Release etc.

For me, combining both variations works best i.e. including conditions in code using #if NETXX and also building for different framework versions in one go.

I have these in my .csproj file:

If you are using the .NET Core build system, you can use its predefined symbols (which actually match your example already and don't require any changes to your .csproj!):

The list of predefined symbols is documented in Developing Libraries with Cross Platform Tools and #if (C# Reference):

Not the answer you're looking for? Browse other questions tagged c# .net-3.5 msbuild .net-4.0 or ask your own question.

9
Conditional compilation for .NET 4
12
How to target multiple versions of .NET Framework from MSBuild?
-1
Prevent .NET version change
2
Is there a preprocessor directive to know if I'm compiling for Windows or Windows Phone?
328
Get MIME type from filename extension
42
How do I set a conditional compile variable?
48
What's the best way to target multiple versions of the .NET framework?
17
Is it possible to conditionally compile to .NET Framework version?
21
Compile to two .NET Frameworks at once
5
Can I use a .NET 4 feature while targeting .NET 3.5 SP1?
see more linked questions…

601
Embedding DLLs in a compiled executable
555
Compile Views in ASP.NET MVC
3
Does C# compiler set version or platform constants?
357
Differences between Microsoft .NET 4.0 full Framework and Client Profile
663
Fastest Way of Inserting in Entity Framework
864
Entity Framework 5 Updating a Record
21
Is there a recommended approach to configuring a NuGet package targeting multiple frameworks in TeamCity using MSBuild?
1
What is the easiest way to generate code files based on conditional compilation symbols in C#?