How does numpy.newaxis work and when to use it?

the result gives me a 2-d plot frame with x-axis from 0 to 1. However, when I try using numpy.newaxis to slice a vector,

Is it the same thing except that it changes a row vector to a column vector?

Generally, what is the use of numpy.newaxis, and in which circumstances should we use it?

Simply put, numpy.newaxis is used to increase the dimension of the existing array by one more dimension, when used once. Thus,

Here is a visual illustration which depicts promotion of 1D array to 2D arrays. 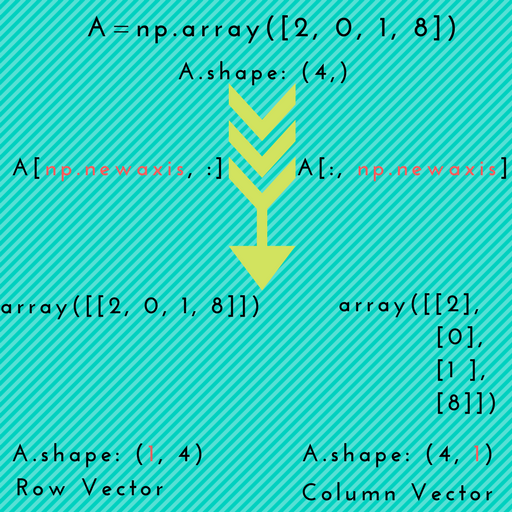 Scenario-1: np.newaxis might come in handy when you want to explicitly convert a 1D array to either a row vector or a column vector, as depicted in the above picture.

Scenario-2: When we want to make use of numpy broadcasting as part of some operation, for instance while doing addition of some arrays.

Let's say you want to add the following two arrays:

If you try to add these just like that, NumPy will raise the following ValueError :

In this situation, you can use np.newaxis to increase the dimension of one of the arrays so that NumPy can broadcast.

Alternatively, you can also add new axis to the array x2:

Note: Observe that we get the same result in both cases (but one being the transpose of the other).

Scenario-3: This is similar to scenario-1. But, you can use np.newaxis more than once to promote the array to higher dimensions. Such an operation is sometimes needed for higher order arrays (i.e. Tensors).

As an alternative, you can use numpy.expand_dims that has an intuitive axis kwarg.

newaxis is also called as a pseudo-index that allows the temporary addition of an axis into a multiarray.

np.newaxis uses the slicing operator to recreate the array while numpy.reshape reshapes the array to the desired layout (assuming that the dimensions match; And this is must for a reshape to happen).

In the above example, we inserted a temporary axis between the first and second axes of B (to use broadcasting). A missing axis is filled-in here using np.newaxis to make the broadcasting operation work.

General Tip: You can also use None in place of np.newaxis; These are in fact the same objects.

The np.newaxis is just an alias for the Python constant None, which means that wherever you use np.newaxis you could also use None:

It's just more descriptive if you read code that uses np.newaxis instead of None.

In the first example I use all elements from the first dimension and add a second dimension:

Similarly you can use multiple np.newaxis to add multiple dimensions:

Are there alternatives to np.newaxis?

There is another very similar functionality in NumPy: np.expand_dims, which can also be used to insert one dimension:

But given that it just inserts 1s in the shape you could also reshape the array to add these dimensions:

Most of the times np.newaxis is the easiest way to add dimensions, but it's good to know the alternatives.

1 If you want to read more about the broadcasting rules the NumPy documentation on that subject is very good. It also includes an example with np.newaxis:

You started with a one-dimensional list of numbers. Once you used numpy.newaxis, you turned it into a two-dimensional matrix, consisting of four rows of one column each.

You could then use that matrix for matrix multiplication, or involve it in the construction of a larger 4 x n matrix.

newaxis object in the selection tuple serves to expand the dimensions of the resulting selection by one unit-length dimension.

It is not just conversion of row matrix to column matrix.

Consider the example below:

How our new dimension enables us to different operations:

Thus, newaxis is not just conversion of row to column matrix. It increases the dimension of matrix, thus enabling us to do more operations on it.

Not the answer you're looking for? Browse other questions tagged python numpy multidimensional-array array-broadcasting numpy-ndarray or ask your own question.

3
the difference between a[:,None] and a[:,]
1
reshape numpy array with a[:,None]
0
Use numpy argmax on the 3rd dimension of numpy array
22
Numpy: use reshape or newaxis to add dimensions
9
multiply numpy array of scalars by array of vectors
-5
Finding differences between all values in an List
2
Concatenating two NumPy arrays gives "ValueError: all the input arrays must have same number of dimensions"
1
Numpy. Compare all vector row in one array with every other one in the same array
0
Broadcast failure: how to dictate the axes of broadcasting?
1
Array conforming shape of a given variable
See more linked questions

2996
What does ** (double star/asterisk) and * (star/asterisk) do for parameters?
3020
How to make function decorators and chain them together?
3068
How do I clone a list so that it doesn't change unexpectedly after assignment?
1445
How can I use threading in Python?
1172
How does Python's super() work with multiple inheritance?
2091
How do I print curly-brace characters in a string while using .format?
1225
How does the @property decorator work in Python?
702
Truth value of a Series is ambiguous. Use a.empty, a.bool(), a.item(), a.any() or a.all()