What is the correct terminology for javascript promises

I'm getting confused with the different terminology thrown around. From my understanding, a promise can be:

Does resolve mean settled? or does it mean its fulfilled? and what the heck is defer?

Terminology can be hard.
Let's take from the Promises/A+ specification and the respective ES6 section that there are 3 states:

The term settled is a hyperonym for fulfilled and rejected, meaning either - the opposite of pending.

The dynamic verbs fulfill and reject describe changing the state from pending into either the fulfilled or rejected. These transitions are called fulfillment or rejection of the promise.

Those were easy. Now, resolve is a different beast. It sometimes is used synonymous to "fulfill", but it would better be understood as settling the promise's fate to either fulfilled or rejected. The resolution (seldom: settlement) of a promise means that it leaves the pending state. But not even that is accurate - the problem is the recursive nature of the Promise Resolution Procedure:

Yes, if a promise is resolved it might not even be known whether it's going to be fulfilled or rejected. But it means the fate is no longer undetermined, as it's bound to the promise that we resolved with (notice that you can resolve a promise only once). 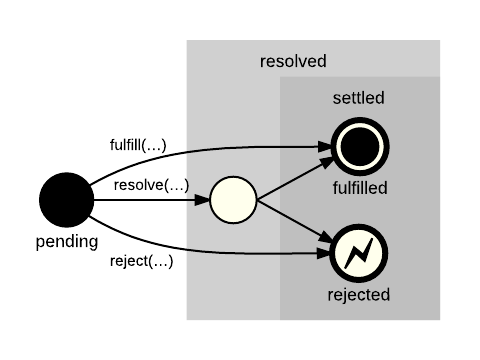 Or, to cite the ECMAScript 6 Specification:

and what the heck is defer?

Deferring a result means that you return an (asynchronous) promise for the result, and not the result directly (synchronously). And also return a deferred rejection instead of throwing synchronously.

Notice that "defer" is also used in some libraries (Q) as the method name to construct a Deferred object - see this answer on The differences between Deferred, Promise and Future for a good explanation.
Oh, and never trust variable names: defer might as well be an abbreviated "deferredObject".

The three promise states are listed in section 2.1 of the Promises/A+ specification.

So here are each of the terms you asked about:

Pending is the initial promise state. The operation represented by the promise has not yet been filfilled or rejected.

Rejected is another of the three promise states. It means that the promise has been rejected and now has its rejected reason. The operation represented by the promise failed to obtain a value and thus has a reason for failing to do so (typically an error code or error object, but it can be anything).

Settled is a term that means the promise is either fulfilled or rejected (e.g. it's not pending any more), but it is not a separate state just a descriptive term to indicate it is no longer pending.

In jQuery, you can create a deferred object with $.Deferred(). In other implementations such as ES6 promises, you just have promise objects with a constructor callback that has reject and resolve functions. The world is presumably moving toward what ES6 will have.

Domenic Denicola's "States and Fates" is a good, pithy summary.

Follow the link for details 'relating states and fates'.

Not the answer you're looking for? Browse other questions tagged javascript promise or ask your own question.

432
Aren't promises just callbacks?
301
What are the differences between Deferred, Promise and Future in JavaScript?
52
Convert promise to bluebird
15
q.js: difference between resolve() and fulfill()
10
Is Promise.resolve a asynchronous function?
15
Passing another promise to a promise handler
12
JS Promises: Fulfill vs Resolve
9
When should I call Promise.resolve() directly?
7
Difference between resolve and return in promise JS
13
Rejected promises in Protractor/WebDriverJS
See more linked questions