I'm starting to develop in ASP.NET again and I ran into a small error within Visual Studio. My .cshtml files show errors when using a few razor functions. For example "The name 'ViewBag' does not exist in the current context". Here is a picture:

I am using a demo project. You can find the project here: https://github.com/Wintellect/Angular-MVC-Cookbook/tree/master/BasicProject

I have looked through several other threads and most suggest to update the web.config file(s). These 2 config files are already present and since it's a pretty popular demo I assume it has all the required configuration in it. I have of course looked through these config files and they do indeed include the suggested solutions.

I had this issue despite having all the correct configuration.

It turned out to be some bad files in the Component Cache, preventing the Razor views from recognising ViewBag, Model, and HtmlHelpers. Deleting these files solved the problem (good versions of these files were created next time I opened Visual Studio).

The files are located here:

I have subsequently seen the same issue on several other developer machines and this fix quickly solves it.

Update the version numbers in the settings of the web.config file in the Views folder.

If you have updated the MVC version through nuget, should be:

Other dependency versions might need to be updated too. Compile and namespace issues in Views for MVC helpers and objects are typically related to messed up web.config files within the View folders.

Find "webpages:Version" in the appsettings and update it to version 3.0.0.0. My web.config had

and I updated it to

I accidentally removed web.config from the Views folder, thinking that it was unnecessary. When I put it back it started working.

Hoping this may help some other poor soul with this problem...

For reference, this is the correct entry (for my scenario)

Sometimes it is not enough to change version numbers in the settings of the web.config. This problem occurs because Visual Studio 2015 doesn't have mvc4 tooling.

Solution is to upgrade your project to MVC 5. It totally solves the problem. You can get help from this page. It clearly explains it.

late to the game but none of these solutions worked for me.

I upgraded to VS 2017, and the site worked, but Visual Studio compiler broke most of .cshtml files

mysolution.sln had the wrong version

so you want to create a new solution with newer VS and compare it to yours and copy version info over.

I've wasted well over a working day on this. I tried everything in this (and other) posts, to no avail. Eventually I found that I needed to open the project in a different way. I've just upgraded an existing website to Visual Studio 2015, MVC5, .NET framework 4.5.2 and am using Windows 10, but suspect the answer would have been the same for other versions of each software application.

So this is the menu option I was choosing to open a website:

Instead of this, I opened the csproj file defining the project using this menu option:

I then had the "clean solution" option many other people refer to: 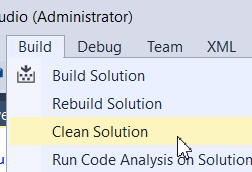 However, I didn't even need this - everything just worked! Well, I got on to the next set of problems, anyway ...

I had added the controller by

My errors got changed by changing the Step 1 as:

The problem was: I had not Inherited my class from Controller

Other messages in my error included - all of which were from this problem:

error CS0117: 'ModelState' does not contain a definition for 'IsValid'

error CS0103: The name 'RedirectToAction' does not exist in the current context

error CS0103: The name 'View' does not exist in the current context

error CS0103: The name 'ViewBag' does not exist in the current context

error CS0103: The name 'Json' does not exist in the current context

Hope this change helps those who have not paid attention in their initial steps.

After having try at least 90% of every solution/trick of this subject (and others), I've finally solved it!! Spoiler alert, there is no trace of logic is the following so-called "solution": Running the solution with all tabs closed finally worked, when nothing else would have spare me the "ViewBag&Co does not exist in the current context"... You've been warned, no freaking logic!

Hope it'll help someone one day ^^

In my case I had this issue happening only on my PC only for one project. My project worked fine in VS2012 but when opened in VS2017 it was having this problem.

The main issue for me here was cache. My project was pointing to the older cached versions of dll for Razor and MVC and it was not finding features that were added in newer versions, such as ViewBag. ViewBag was added in Razor version 3, but because I had Razor version 2 cached it could not find ViewBag (but it could find other stuff which were present in version 2). However, simply clearing cache like in the accepted answer did not fix my problem. We had to change config files to say "use version 3 instead of 2" for Razor and "use version 5 instead of 4" for MVC, then closing VS, removing cache, and opening project and rebuilding. Then things got fixed. Below are more detailed instructions.

Here is the sequence of changes that helped me fix my problem:

Here are those lines in my case:

Turning it off and on again worked for me. You can try restarting visual studio.

I was able to resolve the issue by adding the following to the top of my .cshtml page

After recompiling I was able to delete this line and the error was gone.

I faced similar issue with one of my view. In my case I just cleaned up the solution and tried to rebuild it and its works.

the following link can help you.

It will show you what could be the problem

it solve my problem. somehow i had delete my web.config file from view folder.

I faced the same issue. I tried Clean, Build and Rebuild solution, but didn't work for me.

So at last I did as below:

Hope it works for you guys also.

After upgrading one of my client’s applications from ASP MVC 4 to ASP MVC 5, We had designers errors related to Html Helpers and ViewBag in cshtml pages.

To fix those issues make sure you do the following: Install Asp.NET Web Helpers Library from Nuget Open the Web.config of the project and update the bindings if they haven’t been updated when installing the Nuget packages for example

Find “webpages:Version” in the appsettings and update it to version 3.0.0.0. My web.config had

and I updated it to

Restart Visual Studio and rebuild. You may have to delete the bin folder for your project

After trying everything else and feeling a bit frustrated, I upgraded the .NET framework on my MVC5 app from 4.5 to 4.5.2. Somehow it fixed my problem. Hope it helps.

I solved replacing in web.config

Not the answer you're looking for? Browse other questions tagged c# asp.net-mvc visual-studio razor web-config or ask your own question.

204
what is the function of webpages:Enabled in MVC 3 web.config
34
“The name 'HTML' does not exist in the current context” in MVC 3 Views
9
'System.Web.Mvc.HtmlHelper' does not contain a definition for 'RenderPartial' - ASP.Net MVC
4
Razor references not resolved in MVC 5 views Visual Studio 2015 Enterprise
3
Which NuGet package creates the web.config in your Views folder?
0
No intellisense on namespaces in Views Web.config
0
Using a Model Class of Type T or Interface for Strongly Typed View
-4
Why I have error CS0103 ASP.NET MVC 4.0 The name ''model" does not exist in the current context in Visual Studio 2015 Community?
0
ASP.NET MVC app on .NET 4 do not find ViewBag and model in view