This exception occurs in here. You can reproduce it in IE11. So far I have not found the cause of the issue. Any ideas why this is being caused?

The web site is running on Azure Websites platform and is using ASP.NET MVC 5.

sibaspage answer pointed me into the right direction. But I still see the error message in IE11. For me it worked using the following syntax:

to prevent any problems with consequent releases I recommend doing this:

Another solution can be change the Font embeddability property file. Right click and see Details tab: 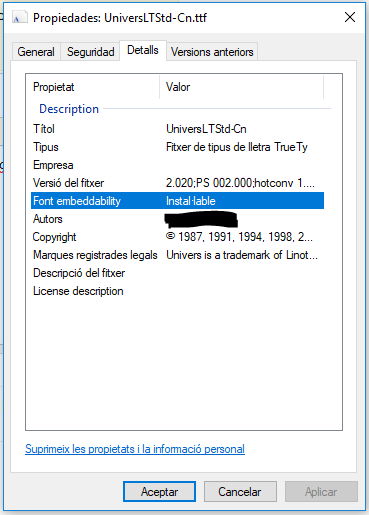 If this property does not appear, you can use this service to add it. It only works for .ttf font files. But I guess there are some other services to change other font file extensions.

For documentation or future visitors: In my case I was experimenting this issue with IE11 and .otf fonts, if this is your case read this Can I use case. Basically what it says is that IE11 doesn't support some .ttf and .otf fonts.

The best solution I found was to convert the .otf font to .woff and add the code on Jakub Holovsky's response with a small change.

I had the same problem and found this article: https://creativemarket.com/blog/the-missing-guide-to-font-formats. You can just add the relevant fonts to your font-face.

Not the answer you're looking for? Browse other questions tagged css fonts font-face or ask your own question.

425
Why is @font-face throwing a 404 error on woff files?
349
Why should we include ttf, eot, woff, svg,... in a font-face
5
Fonts generated with Font Squirrel do not display in IE 9
0
Self hosting fonts - not working in IE 9
196
Multiple font-weights, one @font-face query
8
IE 10 Font Issues - failed OpenType embedding permission check. Permission must be Installable
0
@font-face icon not showing in IE 11, all other browsers supports. Using base64 url