How to fix committing to the wrong Git branch?

I just made a perfectly good commit to the wrong branch. How do I undo the last commit in my master branch and then take those same changes and get them into my upgrade branch?

If you haven't yet pushed your changes, you can also do a soft reset:

This will revert the commit, but put the committed changes back into your index. Assuming the branches are relatively up-to-date with regard to each other, git will let you do a checkout into the other branch, whereupon you can simply commit:

The -c ORIG_HEAD part is useful to not type commit message again.

4 years late on the topic, but this might be helpful to someone.

If you forgot to create a new branch before committing and committed all on master, no matter how many commits you did, the following approach is easier:

Now you have your master branch equals to origin/master and all new commits are on my_feature. Note that my_feature is a local branch, not a remote one.

If you have a clean (un-modified) working copy

To rollback one commit (make sure you note the commit's hash for the next step):

To pull that commit into a different branch:

If you have modified or untracked changes

Also note that git reset --hard will kill any untracked and modified changes you might have, so if you have those you might prefer:

If you already pushed your changes, you will need to force your next push after resetting the HEAD.

Warning: a hard reset will undo any uncommitted modifications in your working copy, while a force push will completely overwrite the state of the remote branch with the current state of the local branch.

Just in case, on Windows (using the Windows command line, not Bash) it's actually four ^^^^ instead of one, so it's

I recently did the same thing, where I accidentally committed a change to master, when I should have committed to other-branch. But I didn't push anything.

NOTE: I used this website as a reference https://www.clearvision-cm.com/blog/what-to-do-when-you-commit-to-the-wrong-git-branch/

So if your scenario is that you've committed to master but meant to commit to another-branch (which may or not may not already exist) but you haven't pushed yet, this is pretty easy to fix.

Now all your commits to master will be on another-branch.

For multiple commits on the wrong branch

If, for you, it is just about 1 commit, then there are plenty of other easier resetting solutions available. For me, I had about 10 commits that I'd accidentally created on master branch instead of, let's call it target, and I did not want to lose the commit history.

What you could do, and what saved me was using this answer as a reference, using a 4 step process, which is -

Here are the above steps in details -

To elaborate on this answer, in case you have multiple commits to move from, e.g. develop to new_branch:

If you run into this issue and you have Visual Studio, you can do the following:

Right-click on your branch and select View History: 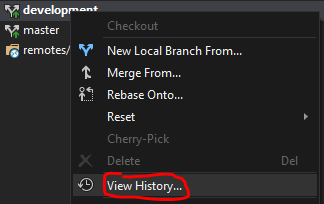 Right-click on commit you want to go back to. And Revert or Reset as needed.

If the branch you wanted to apply your changes to already exists (branch develop, for example), follow the instructions that were provided by fotanus below, then:

And obviously you could use tempbranch or any other branch name instead of my_feature if you wanted.

Also, if applicable, delay the stash pop (apply) until after you've merged at your target branch.

For me, this was solved by reverting the commit I had pushed, then cherry-picking that commit to the other branch.

You can use git log to find the correct hash, and you can push these changes whenever you like!

Not the answer you're looking for? Browse other questions tagged git git-commit or ask your own question.

4603
Reset local repository branch to be just like remote repository HEAD
35
VSTS - prevent push to master but allow PR merge
4
Git Committed files move from one branch to another before push
2
How to merge changes from master to my branch in git
1
Git - correct commits made to wrong branch
0
Understanding git branching and staging files
0
revert branch without losing revisions
1
How to Undo or revert git push in gitlab?
0
How to move another user's changes that were pushed to master instead of feature branch?
1
Missing untracked files after soft reset
See more linked questions