Getting error "No such module" using Xcode, but the framework is there

I'm currently coding in Swift, and I've got an error:

No such module Social

But I don't understand, because the module is in my project, declared in "Linked frameworks and Libraries" and in "Embedded Binaries".

The frameworks is in Objective-C, so I wrote a Bridge Header for it.

Please, how can I make Xcode recognize the framework? 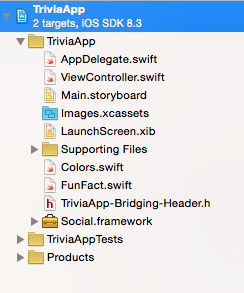 In case it's Friday afternoon or anytime after 1am:

Opening xcodeproj instead of xcworkspace will cause an error like this...

I'm not sure why this happens, but one way to solve your issue is to go into your build settings and defining the Framework Search Paths to a folder which contains the frameworks in question. If the frameworks are placed in your project directory, simply set the framework search path to $(SRCROOT) and set it to recursive.

Make sure that the naming of you configurations in the sub projects matches that of the "parent" project. If the configuration naming don't match exactly (case-sensitive), Xcode will abort the archive process and show the error "No such module ..."

I am not quite sure why Martin R's answer in the comments for the question is so disregarded:

Make sure that you tried simply skipping import of the framework as it is already added with the bridging header.

I had the same issue using Cocoapods and Swift. I didn't notice the following lines in the Podfile:

So, all I had to do was change it to:

The following steps worked for me.

Please compare this screenshot with your build setting. It may this work. Go to the framework search path:

In my case, after many attempts to figure out what I was doing wrong importing a framework I eventually discovered that the framework itself was the problem. If you are not getting your framework from a trusted source you should inspect the framework and ensure that it contains a Modules folder with a module.modulemap file inside it. If module.modulemap is not present, you will get the "No such module 'MyFramework'" error. 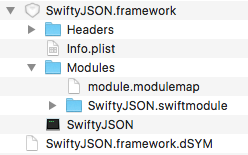 If the Modules folder is missing the "MyFramework.swiftmodule" folder then the framework will be found but Xcode won't know about its contents so you will get different errors.

Assuming the Framework really is there and in the path, etc... delete the ~/Library/Developer/Xcode/DerivedData/ModuleCache directory (and clean the project and delete the project-specific derived data for good measure).

When you do the standard cleanup, the ModuleCache directory doesn't get rebuilt.

Be sure, that Find implicit Dependencies in Build options in Scheme is on!

No such module Compile error

It is compile time error. You can get it in a lot of case:

make sure that generated binary contains module.modulemap file and it's headers are located in Build Phases -> Headers section

It can be an absolute path or a relative path like $(SRCROOT) or $(SRCROOT)/.. for workspace

for App Target where used additional dependency from CocoaPods. To solve it use inherit![About] in Podfile

What worked for me is this solution to another question. Closing Xcode and reopening the project as workspace.
Go to your project folder and open .xcodeworkspace file.
Once you open the workspace (instead of project), Pods should appear as top level project in Project Navigator.

There are several potential misconfigurations the issue can arise for,

For me Build Active Architecture Only was set to Yes for the selected configuration. This did the trick:

I also encountered the same error a few days back. Here's how I resolved the problem:

The error is "module not found"

Ok, how the same problem was resolved for me was to set the derived data location relative to the workspace directory rather than keeping it default. Go to preferences in xcode. Go to locations tab in preferences and set Derived data to Relative. Hope it helps.

I was getting same error for

But then noticed that I was not adding pod to the main target section but only adding to Test and TestUI targets in Podfile.

for an xcode swift project, the following Podfile is generated

So, need to make sure that one adds pods to any appropriate placeholder.

If you're building for a platform like tvOS, make sure you have an Apple TV (i.e. matching) simulator selected.

Building a tvOS app with an iOS simulator selected gave me exactly this error. Spent the better part of an hour looking for all sorts of build issues... doh.

I was getting the same error as i added couple of frameworks using Cocoapods. If we are using Pods in our project, we should use xcodeworkspace instead of xcodeproject. To run the project through xcodebuild, i added -workspace <workspacename> parameter in xcodebuild command and it worked perfectly.

In my case the app the IPHONEOS_DEPLOYMENT_TARGET was set to 9.3 whereas in my newly created framework it was set to 10.2

The implicit dependencies resolver ignored my new framework because the requirements of the target platform are higher than the app requirements.

Sometimes pod deintegrate and then pod install helps me, too.

I found that the Import Paths in the Build Settings was wrong for a custom (MySQL) module. After pointing that to the right direction the message was gone.

After beating my head against the wall and trying literally every single other answer posted here over the last week, I finally found a solution.

I have two separate targets - one for release and one for development. The development target was created long after the release target, which lead me to forget some setup steps for that target.

I was able to get my project to compile properly using my release target, but my development target was having an issue.

After looking at my Podfile for the twentieth time, I noticed that I only had the following, under my shared_pods definition:

What I needed to do was add my second target to my Podfile, and that fixed the issue:

Hopefully this saves someone a few days of frustration.

I fixed this with

Add the framework which should be at the top in the Workspace folder. Pain in the arse.

I just deleted my cocoapod. Then, I did a pod install to remove it. Then, I just added it back into my podfile and re-installed it. That made it work. Not sure why.

I had already installed pods. Build worked without any problems when I builded application on my device, but archive didn't work. I just run:

In General => Linked Frameworks and Libraries, I added my ./Pods/Pods.xcodeproj and it did the trick

In Xcode 10.1 the solution for me was to change the build system on Workspace Settings in the File menu. It is by default set to New Build System, changed that to Legacy Build System and that did the trick. 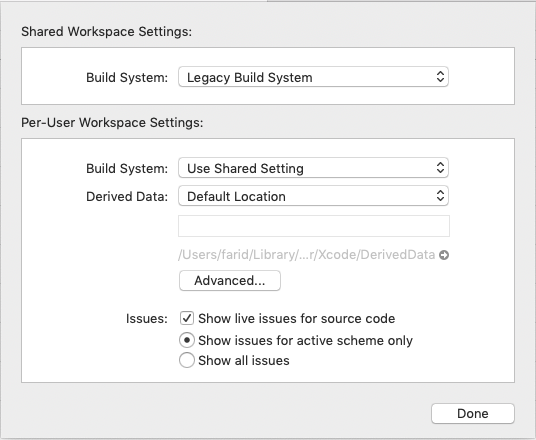 I was having a similar issue with xcode 10.3. xCode was unable to recognise files from pods. Here I have solved this way: 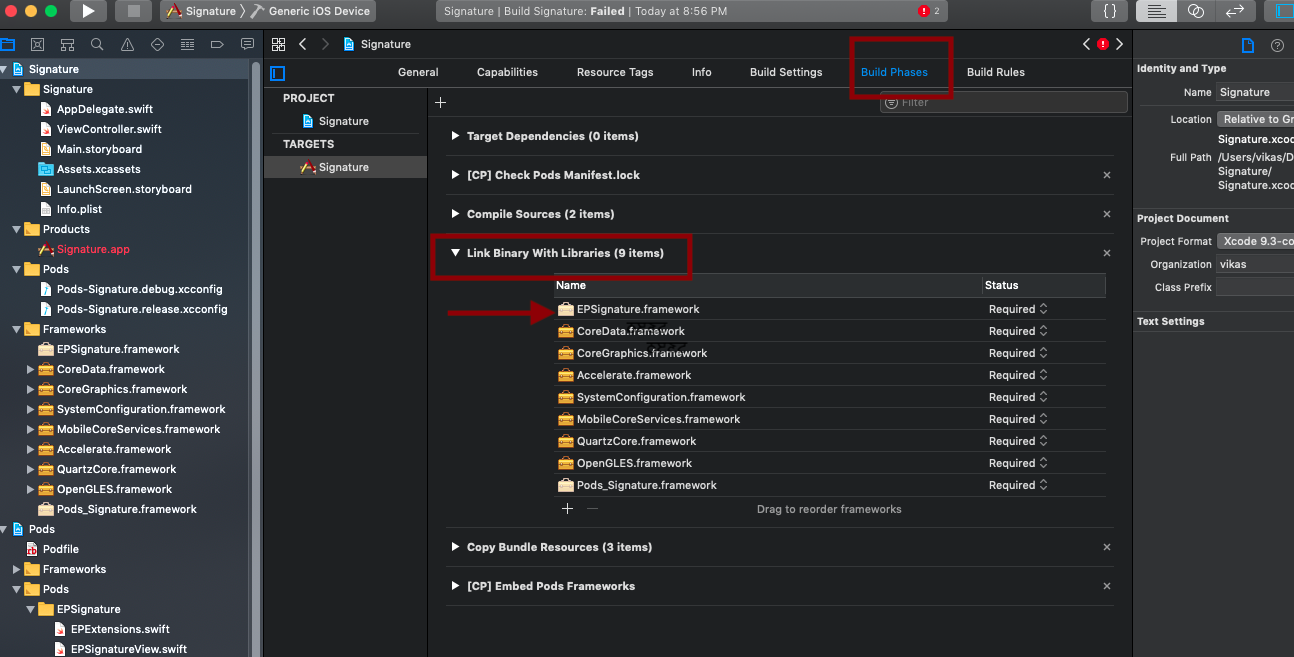 3
Getting "No such module 'RxSwift'" with Xcode 8 and Swift 3.0
2
Frameworks installed from cocoapods not working
0
"No such module" when achieving (builds fine)
0
Error "No such module" when import framework in Swift file
633
iOS app with framework crashed on device, dyld: Library not loaded, Xcode 6 Beta
1093
How do I call Objective-C code from Swift?
363
How can I delete derived data in Xcode 8?
92
'No such module' when I use CocoaPods
161
Adding a build configuration in Xcode
149
When should we use "embedded binaries" rather than "Linked Frameworks" in Xcode?
See more linked questions

1280
Xcode - How to fix 'NSUnknownKeyException', reason: … this class is not key value coding-compliant for the key X" error?
189
Importing CommonCrypto in a Swift framework
102
Getting "file not found" in Bridging Header when importing Objective-C frameworks into Swift project
95
What is the difference between Embedded Binaries and Linked Frameworks
20
Import my custom module/framework Xcode Swift
4
Xcode / Swift: No such module 'GeoFire'
18
No such module ... in Xcode
5
Xcode - Why there is no "Embedded Binaries" under "General"?
172
Module compiled with Swift 5.1 cannot be imported by the Swift 5.1.2 compiler
717
Xcode building for iOS Simulator, but linking in an object file built for iOS, for architecture 'arm64'