The original question was about an issue specific to VS2015 CTP6 with the XUnit test runner. It's clear from the answers that there is a much broader issue with unit test discovery in Visual Studio which may occur in many different situations. I have cleaned up my question to reflect that.

I have also included a script in my own answer that I still use to this day to solve similar problems when they appear.

Many other answers have also proven helpful in better understanding the intricacies of the VS test runner. I appreciate that people are still sharing their solutions!

Since yesterday, my Visual Studio Test Explorer won't discover tests for any of my projects. It does not show the green loading bar after building, either.

When I go to the Visual Studio Test Explorer and click "Run All", or when I right-click any test method and select "Run Tests", I get the following in my output window:

Could not load file or assembly 'Microsoft.VisualStudio.Web.ProjectSystem, Version=14.0.0.0, Culture=neutral, PublicKeyToken=b03f5f7f11d50a3a' or one of its dependencies. The system cannot find the file specified.

I tried with the following testing frameworks and all of them give the same behavior:

I found an issue on GitHub (xunit) that appeared to be similar: Cannot get tests discovered #295, with this comment from the xunit team:

Be aware that Visual Studio 2015 CTP 5 has been reported to be broken by many people with unit testing in general (not just xUnit.net), so don't expect that to work.

Also, please make sure you've cleaned out Visual Studio's runner cache. If it gets corrupted, Visual Studio will permanently misbehave until it's deleted. To clear the cache, shut down all instances of Visual Studio, then delete the folder %TEMP%\VisualStudioTestExplorerExtensions (honestly, it probably wouldn't hurt to delete everything in %TEMP% that can be deleted).

I tried their suggestion to delete the folder %TEMP%\VisualStudioTestExplorerExtensions. Unfortunately that did not fix the problem.

I noticed that ReSharper actually is able to discover some tests. It only works for the VS and NUnit tests, not for xunit.

There has to be some sort of temp or cache folder I need to clear, but I know Visual Studio has many of them and not all of them can be deleted without unwanted side-effects.

To my surprise, clearing temp files located in the %TEMP% directory resolved the issue for me.

Note: This path is generally at C:\Users\(yourusername)\AppData\Local\Temp

As @Warren-P included, you can navigate to the temp folder by putting in %temp% in Start Menu, or launch "File Explorer" and enter %temp% in the address bar.

It could be that your code is compiled with x64 therefore have to enable the Default Processor Architecture as X64.

This issue still returns every now and then. I wrote a small PowerShell snippet to automate clearing the relevant cache/temp folder/files for me. I'm sharing it here for future readers:

Make sure to close Visual Studio beforehand and it's probably a good idea to reboot afterwards.

The problem was "solved" after a thorough cleaning of Visual Studio-related temp/cache folders.

Since I did not have the time to go through everything one-by-one and then test in-between, I unfortunately don't know which one actually caused the problem.

These are the exact steps I've taken:

One reason for this problem is that your test class is not public. MSTest only discovers tests from public classes.

In Visual Studio 2015(Update 3) if you want to attach the tests in the test explorer then have to install the NUnit Test Adapter.Download the adapter from Tools->Extension And Updates->Online tab(you have to search for the adapter)->Download. By restarting the Visual Studio you can see the change for the test framework.

I don't have a complete answer to this, but I have determined some things by playing with a test project:

This is current as per VS 2015 CTP 6, using the beta4 releases, not the dailies.

I had an instance where some tests would not be picked up because I had made them async like the following:

The problem was I forgot to make them return a Task and not void when I did the switch-over. One would think this would cause an error or failed test but nope. The unit tests in that class were fully ignored and acted like they didn't exist.

It wasn't after about 3 clean and builds + restarting VS.NET that I saw the test run and fail indicating I forgot to add the Task return type:

After the update, the unit tests were found and worked correctly. This might be an edge case, but having async tests for using await within but not having the signature correct can cause this same issue and it's not the 1st time I've done this. 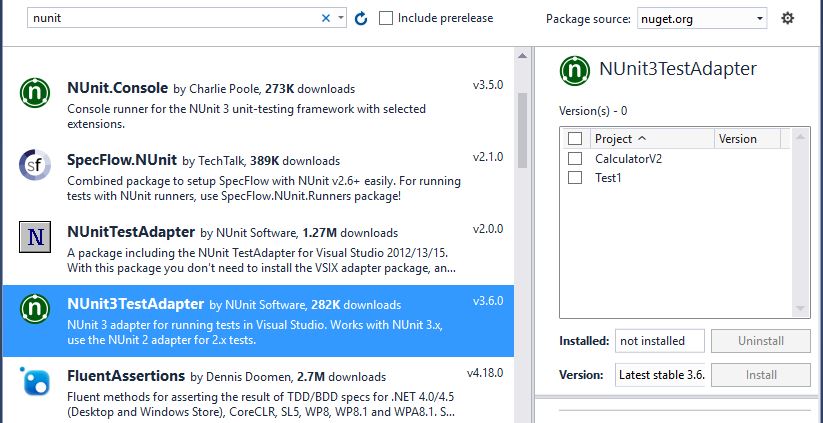 I had the same pronlem but the folder "%TEMP%\VisualStudioTestExplorerExtensions" did not exist on my machine so as i read the posts i had the idea to create it and it works. The test explorer is now able to show all my tests. Thanks.

Just restart Visual Studio and in Test Explorer do "Run All" ... All my tests are discovered then.

In my case (Visual Studio Enterprise 2015 14.0.25425.01 Update 3, Resharper 2016.2) I just needed to do a clean solution from the Build menu. Rebuilding the solution then cause the test explorer to "wake up" and find all the tests again.

The solution in my case was just to install the NUnit 3 Test Adapter extension to my Visual Studio 2015. 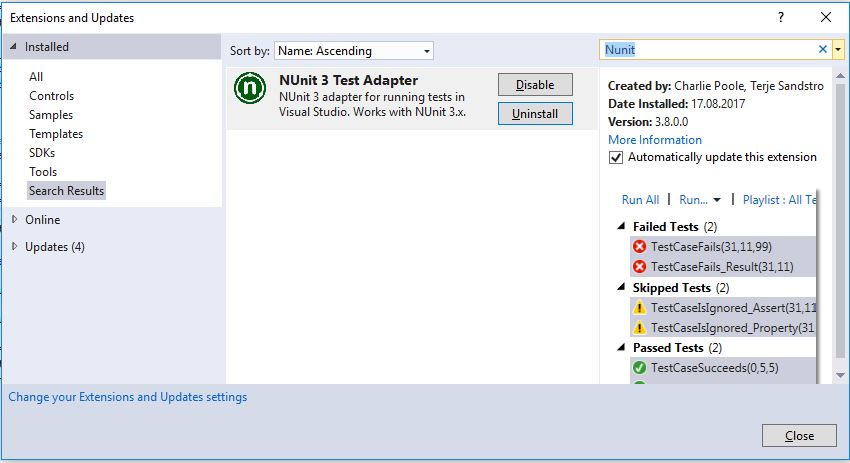 In my case, MSTest under VS 2015 was ignoring tests with test (i.e. method) names that were longer than 174 characters. Shortening the name allowed the test to be visible. This was determined via guess-and-check by manipulating the test name.

This probably won't help most people, but someone inexperienced at unit testing had written a test method that returned bool instead of void:

Changing the return type to void fixed the problem.

Ensure you have xunit.runner.visualstudio package in your test project packages.config and also that was correctly restored.

I know this was not the case of the original question however it could save time for someone like me.

I would just like to add that I found an entirely different solution to the ones above.

I had declared my test class as below:

As soon as I added the public modifier to the class, it worked as expected!

If you're targetting .NET Standard or .NET Core, you need to use the NuGet package for NUnit Test Adapter and not the extension.

It is recommended to install the adapter from NuGet if you are testing .NET Core or .NET Standard projects. The VSIX adapter does not, and will not, support .NET Core because VSIX packages cannot target multiple platforms.

Also check the FAQ there:

My tests aren't showing up in Visual Studio 2017?

This happened to me because my test project contained an app.config. It was automatically added by NuGet packages for assembly redirection, but my tests seemed to run fine without it.

I had the same problem. I just cleaned and rebuilt the project and I was able to see the tests that were missing.

Popping in to share my solution. I was on Windows 10, Visual Studio 2015, NUnit 3.5, NUnit Test Adapter 3.6 (via NuGet, not the VISX extension) and none of my tests were being discovered. My problem was that in the Tests project of my solution, somehow a shortcut to my "Documents" folder had been created within the project folder. I'm guessing the test adapter was seeing the shortcut and getting hung up trying to figure out what to do with it, resulting in the failure to display unit tests.

Deleting the file \AppData\Local\Microsoft\VisualStudio\14.0\1033\SpecificFold‌​erCache.xml solved the issue for me.

This topic is somewhat outdated, but my solution to the missing Test status in VS2015:

The task-status only shows up on the Debug buildconfiguration. Ofcourse this also makes it impossible to debug your test through the test-explorer.

I was also bitten by this wonderful little feature and nothing described here worked for me. It wasn't until I double-checked the build output and noticed that the pertinent projects weren't being built. A visit to configuration manager confirmed my suspicions.

Visual Studio 2015 had happily allowed me to add new projects but decided that it wasn't worth building them. Once I added the projects to the build it started playing nicely.

I resolved it by changing X64 to : Right click on project -> Properties -> Build -> Platform target -> Any CPU

Somehow my project was set to compile as a Static Library (.lib). After changing this to a Dynamic Library (.dll), tests where discovered correctly by Visual Studio 2012.

It was so easy for me to fix the issue as:

We had the same problem. We have a big VS 2015 solution with multiple C# projects in it and even more test projects.

Turns out that the projects didn't have the same version of MsTest TestFramework and TestAdapter, and that sometimes they used NuGets and other times good old references, and that is not supported apparently (so much for such an expensive IDE).

Removing all Microsoft.VisualStudio.Test* references and then adding / updating the two MSTest NuGets fixed the problem.

I solved this problem by realizing that the Target Framework for my test project was different than the project under test. Yes, I caused this problem by changing the target framework from the default (Project>Properties>Application), but failed to this this for the test project, which was created several weeks later. The mismatch did not cause a compiler error, but it did result in a warning in the Error List window. Once I selected the option to display warnings, the solution was obvious.