Where do I set my company name?

Where do I set my company name for xcode (not the project). 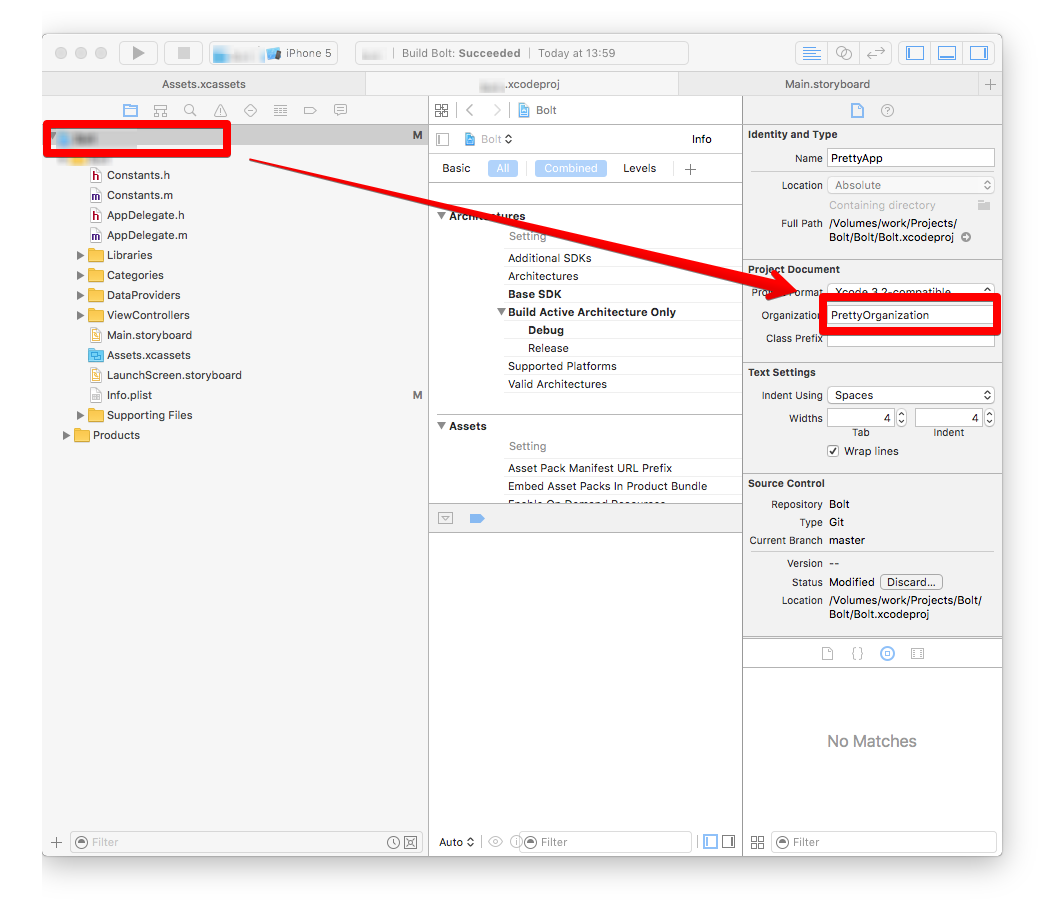 By default, Xcode inserts a company name something similar to the following in all new source files (.m .h etc):

Changing this reference is as simple as entering the following from within a terminal window, replacing “YourNameHere” with the text you prefer. Also, make sure this is all entered on one line in the terminal.

you could even go to ~/Library/Preferences and double-click com.apple.Xcode.plist and use the handy-dandy plist editor to set this and a whole bunch of other interesting defaults not covered by the Xcode or IB preference panels.

It seems like the Xcode does not retrieve ORGANIZATIONNAME from neither

The proper solution is to update your name & company name in Address Book.

Then you can try by creating any new Xcode project:

Or you can set the company name in your address card in the Mac OS X address book application. Worked for me (SL, Xcode 3.2.2)

Adding to what SLF wrote above:

But there is a small catch:

Changing the Organization name as SLF described didn't set the project file as modified and no changes where saved.

You need to make a small change to the project, like adding a group after you change the organization name, this will cause Xcode 4 to save the file.

Also if you are working on a workspace, you need to make the change for each project.

If you want change __MyCompanyName__ in Xcode 4, you can try the following command.

I only test on Xcode 4 pre3 and it works. 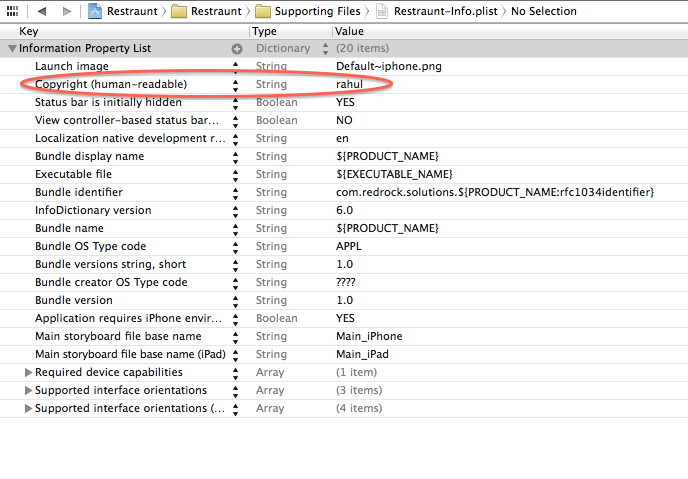 In XCode 5 you can select company name on project creation. If you would like to change company name for existing project, then:

There's more confusion about this than there should be. I clarified here: https://stackoverflow.com/a/9793899/1273966 I'll do the same in this thread.

If the organisation name is blank in the project document (described above) the company name is pulled from the 'me' entry in your address book.

If you enter an organisation name in the project document as described above, it will override the company name in the address book. IE: You can override your company name on a per project basis. Pretty clever, but obviously has a lot of people confused.

open up the xcode

there you can set the name.

In XCode 4, open up your project. Select the top-most item in the Project Navigator (MyProjectName, 1 target, iOS SDK 4.3 -- or whatever). Open up the file inspector (View->Utilities). In the Project Document section, you should see an "Organization" line. Edit that, and new files that you create will display the new organization name. This is a project setting, hence you'll have to do it for every project.

The Organization Name field is one that's shown in the New Project wizard. Its default value is the value that it was on the previously open project.

It looks like the final version of Xcode 4 is not respecting the ORGANIZATIONNAME setting (either the old one, or the new one with com.apple.dt.Xcode. This sucks for me, because I have my company name in my address card, but I'm not doing Xcode work for my company. Thus, I don't want my actual company name to get inserted in my source files. I want the value I set for ORGANIZATIONNAME.

Update: It looks like it partially works. I had shutdown Xcode before setting the value, then I restarted it, and created a new project. I saw that it was still using my company name from my Address Book card, and not ORGANIZATIONNAME. But then I created some new files in the project (File>New File...) and when they were created, they DID have the value from ORGANIZATIONAME. So, it looks like the code there is at least two bits of code that fill in the file template with the company name, and they are pulling from different locations.

Not the answer you're looking for? Browse other questions tagged xcode or ask your own question.

1012
How to change the name of an iOS app?
173
Where is Xcode's build folder?
37
Xcode - Change Company Name and Username
250
What is “Constrain to margin” in Storyboard in Xcode 6
881
Xcode error “Could not find Developer Disk Image”
601
How do I see which version of Swift I'm using?
1
I don't have a company, how to fill in organization name in Xcode?
506
How do I completely rename an Xcode project (i.e. inclusive of folders)?
710
Hide strange unwanted Xcode logs
320
I get conflicting provisioning settings error when I try to archive to submit an iOS app