I just upgraded to Xcode 6.3 and it has the Swift 1.2 support. I was loading quick documentation in a swift file for the description variable as part of the Printable protocol.

I noticed that the documentation has a nice little inline code block. I'm as of yet unsure if this was there in the previous version of swift and whether it is "special" or they've added more support for features for inline documentation.

Anybody aware of how to do this for my own quick-help? 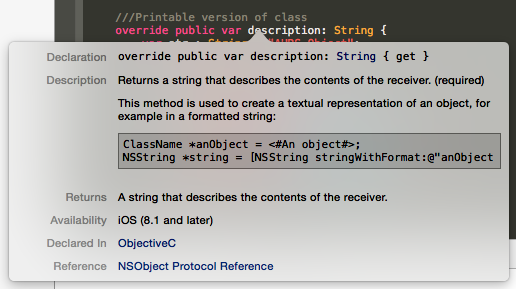 So after some "sleuthing" the closest I could come to for an answer was at: https://developer.apple.com/swift/blog/?id=24

Stylized text is easy to add to your playground by adding special markup to your comments based on the familiar Markdown syntax. Some available styles are headings, bold, italic, lists, bullets, and links to external or bundled resources.

Although the blog post is specifically talking about the new Playgrounds it would appear they have used the same renderer in Xcode to generate quick-doc/quick-help (which is great).

What I've gathered is that the following is supported

The following does not seem to work:

The Playground markdown document is here: https://developer.apple.com/library/prerelease/ios/documentation/Swift/Reference/Playground_Ref/Chapters/MarkupReference.html however as seen above not everything is applicable to inline documentation of code

Not the answer you're looking for? Browse other questions tagged ios swift or ask your own question.

56
How to use Swift documentation comments

995
How do I animate constraint changes?
1049
How do I call Objective-C code from Swift?
802
#ifdef replacement in the Swift language
683
@selector() in Swift?
974
#pragma mark in Swift?
248
Does Swift have documentation generation support?
956
Swift Beta performance: sorting arrays
215
Why is Swift compile time so slow?
80
Xcode 6.3 Crashes when navigating from storyboard to other Swift 1.2 file
469
Xcode 12, building for iOS Simulator, but linking in object file built for iOS, for architecture arm64