Can one get hierarchical graphs from networkx with python 3?

I am trying to display a tree graph of my class hierarchy using networkx. I have it all graphed correctly, and it displays fine. But as a circular graph with crossing edges, it is a pure hierarchy, and it seems I ought to be able to display it as a tree.

I have googled this extensively, and every solution offered involves using pygraphviz... but PyGraphviz does not work with Python 3 (documentation from the pygraphviz site).

Has anyone been able to get a tree graph display in Python 3?

edit (7 Nov 2019) I've put a more refined version of this into a package I've been writing: https://epidemicsonnetworks.readthedocs.io/en/latest/_modules/EoN/auxiliary.html#hierarchy_pos. The main difference between the code here and the version there is that the code here gives all children of a given node the same horizontal space, while the code following that link also considers how many descendants a node has when deciding how much space to allocate it.

edit (19 Jan 2019) I have updated the code to be more robust: It now works for directed and undirected graphs without any modification, no longer requires the user to specify the root, and it tests that the graph is a tree before it runs (without the test it would have infinite recursion - see user2479115's answer for a way to handle non-trees).

edit (27 Aug 2018) If you want to create a plot with the nodes appearing as rings around the root node, the code right at the bottom shows a simple modification to do this

edit (17 Sept 2017) I believe the trouble with pygraphviz that OP was having should be fixed by now. So pygraphviz is likely to be a better solution that what I've got below.

Here is a simple recursive program to define the positions. The recursion happens in _hierarchy_pos, which is called by hierarchy_pos. The main role of hierarcy_pos is to do a bit of testing to make sure the graph is appropriate before entering the recursion:

and an example usage: 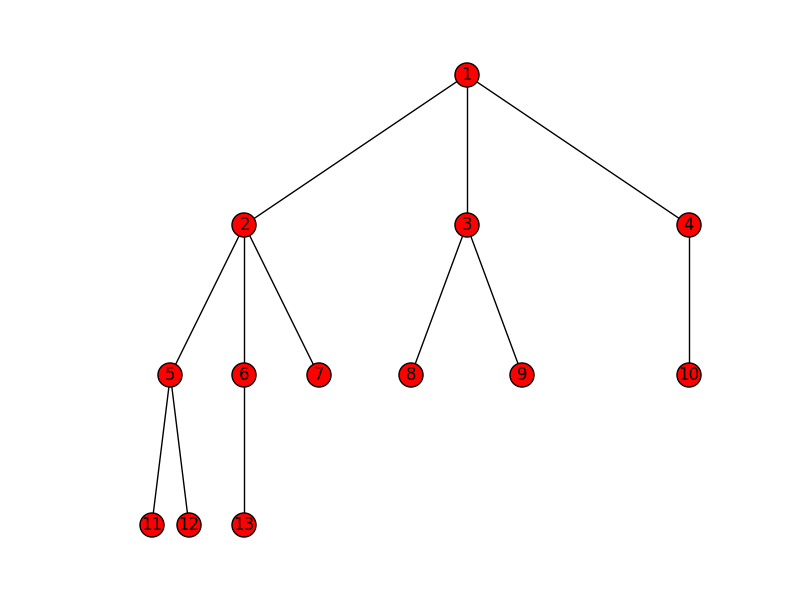 Ideally this should rescale the horizontal separation based on how wide things will be beneath it. I'm not attempting that but this version does: https://epidemicsonnetworks.readthedocs.io/en/latest/_modules/EoN/auxiliary.html#hierarchy_pos

Let's say you want the plot to look like: 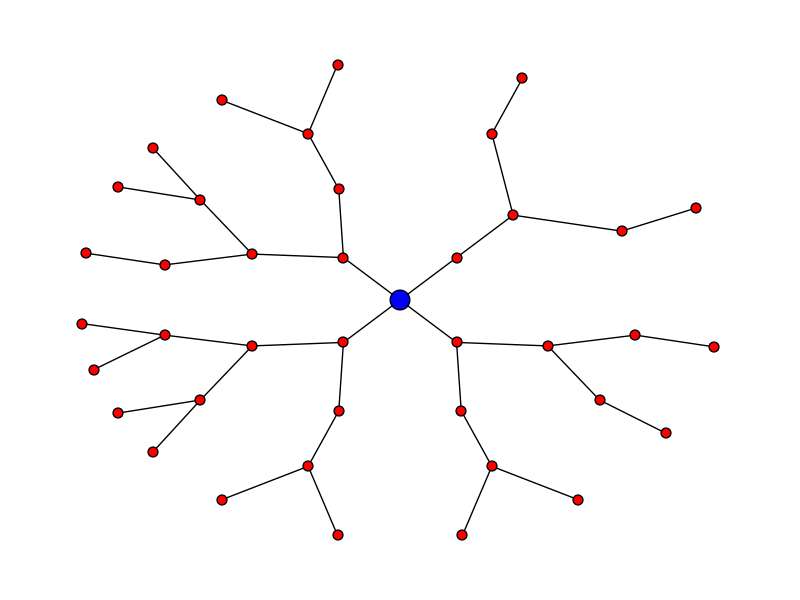 Here's the code for that:

Here is a solution for large trees. It is a modification of Joel's recursive approach that evenly spaces nodes at each level. 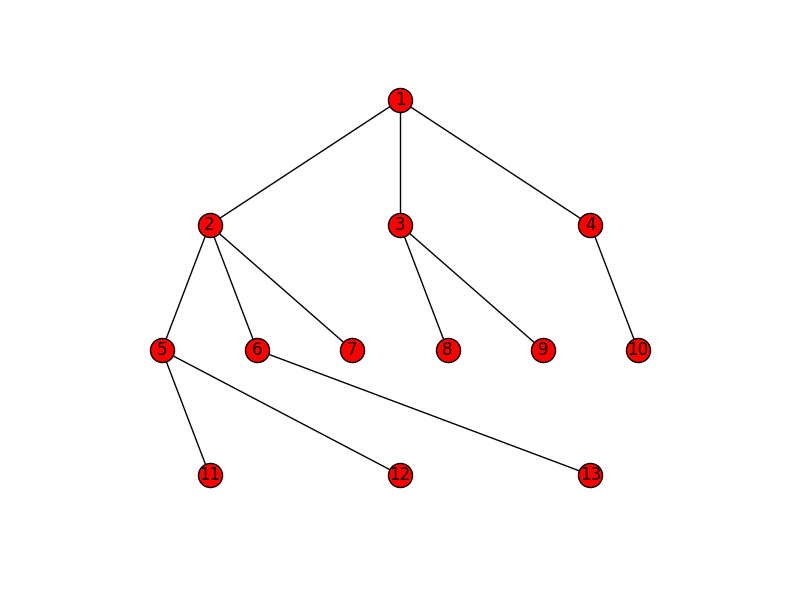 And this is a more complex graph (rendered using plotly): 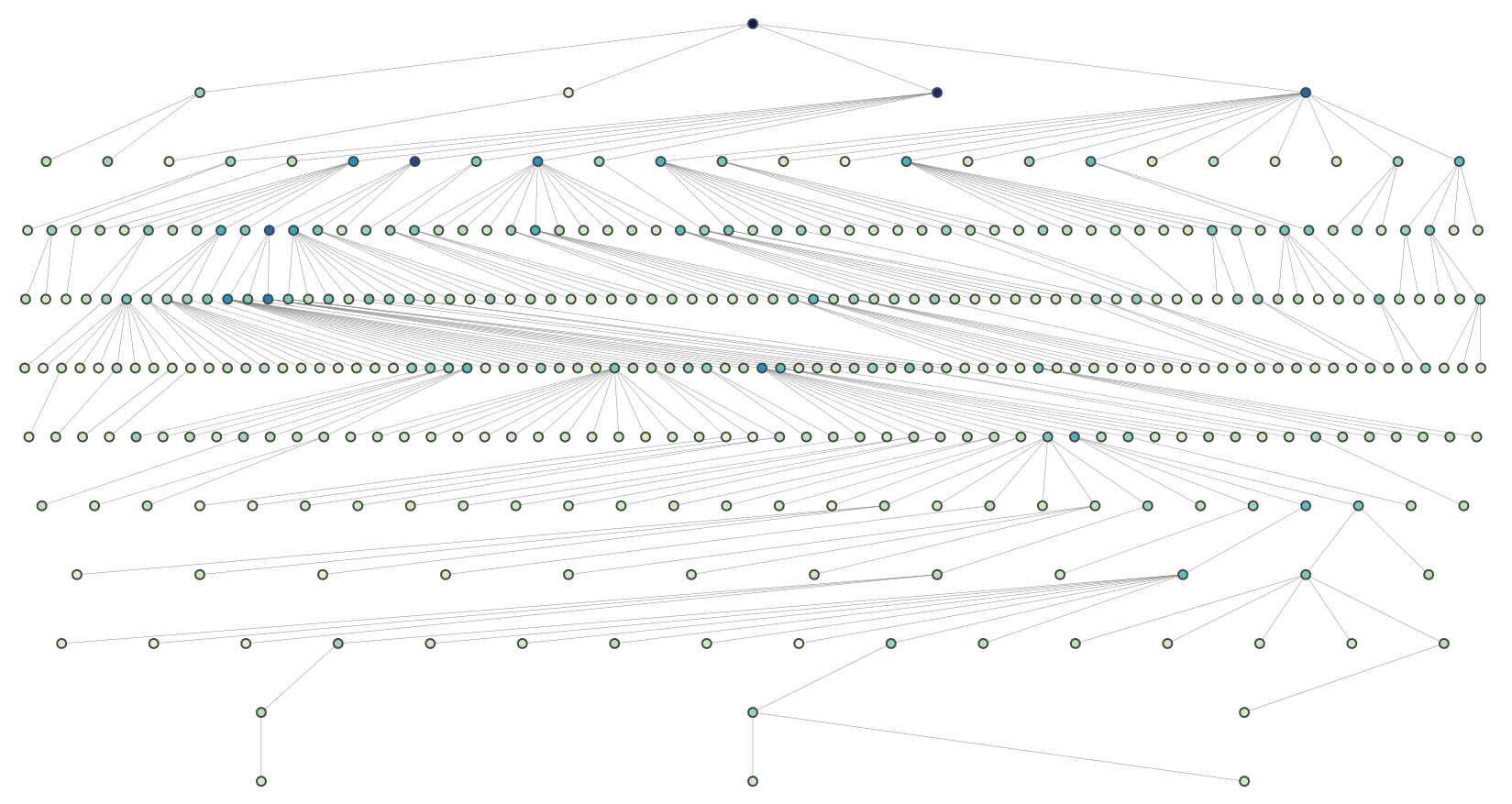 The simplest way to get a nice-looking tree graph display in Python 2 or 3 without PyGraphviz is to use PyDot (https://pypi.python.org/pypi/pydot). Whereas PyGraphviz provides an interface to the whole of Graphviz, PyDot only provides an interface to Graphviz's Dot tool, which is the only one you need if what you're after is a hierarchical graph / a tree. If you want to create your graph in NetworkX rather than PyDot, you can use NetworkX to export a PyDot graph, as in the following:

Note that Graphviz and PyDot need to be installed for the above to work correctly. 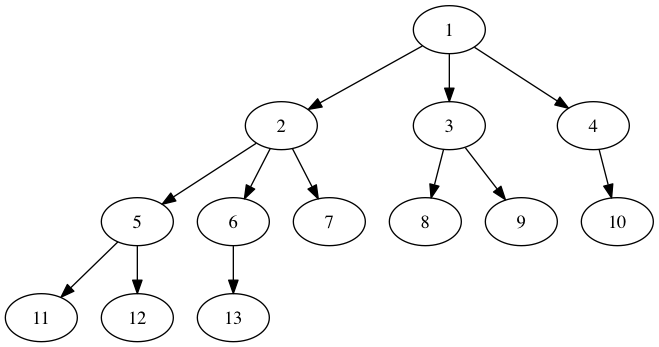 Warning: I have experienced problems when using PyDot to draw graphs with node attribute dictionaries exported from NetworkX - sometimes the dictionaries seem to be exported with quotation marks missing from strings, which causes the write method to crash. This can be avoided by leaving out the dictionaries.

I modified slightly so that it would not infinitely recurse.

Also, this type of visualization is called a layered graph drawing or Sugiyama-style graph drawing, which can display many kinds of graphs, including non-trees.

For a directed graph, Since neighbors(x) include only the succesors(x), so you have to remove the lines:

Also, a better option would be this:

Not the answer you're looking for? Browse other questions tagged python networkx pygraphviz or ask your own question.

97
Is there a way to guarantee hierarchical output from NetworkX?
15
How to draw a tree more beautifully in networkx
6
Networkx: how to specify multiple roots for plotting multiple trees at once?
6
Plot the dendrogram of communities found by NetworkX Girvan-Newman algorithm
5
Draw a graph from networkx centered on a basemap position
3
Fixed position hierarchical output from NetworkX without graphviz?
3
Plot networkx graph with hierachy horizontally and manipulate length of arrows
1
preserving the left and right child while printing python graphs using networkx
0
Network graph visualisation with an axis of levels in python (layered layout)
0
networkx.graw_planar() never finishes
See more linked questions

5075
How can I safely create a nested directory?
2119
How can I randomly select an item from a list?
3462
How to get the current time in Python
1599
Extracting extension from filename in Python
2460
How do I get a substring of a string in Python?
2443
How to upgrade all Python packages with pip
2061
Why is reading lines from stdin much slower in C++ than Python?
2425
How can I remove a key from a Python dictionary?