How to export “fat” Cocoa Touch Framework (for Simulator and Device)?

With Xcode 6 we get ability to create own Dynamic Cocoa Frameworks.

We have to make fat library to run project on devices and simulators. i.e. support both 32 and 64 bit in Frameworks.

But I didn't find any manuals, how to export universal fat Framework for future integration with other projects (and share this library with someone).

Here is my steps to reproduce:

But in the end I still have problem with running project with this framework on devices and simulator at once.

So, how to create a dynamic framework that works on devices and simulators?

This answer related to Xcode 6 iOS Creating a Cocoa Touch Framework - Architectures issues but it's not duplicate.

I found a "dirty hack" for this case. See my answer below. If someone knows more convenient way - please, let me know!

The actuality of this answer is: July 2015. It is most likely that things will change.

Currently Xcode does not have tools for automatic export of universal fat framework so developer must resort to manual usage of lipo tool. Also according to this radar before submission to AppStore developer who is framework's consumer also must use lipo to strip off simulator slices from a framework.

I did similar research in the topic (the link at the bottom of the answer).

I had not found any official documentation about distribution of so my research was based on exploration of Apple Developer Forums, Carthage and Realm projects and my own experiments with xcodebuild, lipo, codesign tools.

Here's long quote (with a bit of markup from me) from Apple Developer Forums thread Exporting app with embedded framework:

Currently the only way is exactly what you have done:

This describes process pretty much the same as @skywinder did it in his answer.

This is how Carthage uses lipo and Realm uses lipo.

There is radar: Xcode 6.1.1 & 6.2: iOS frameworks containing simulator slices can't be submitted to the App Store and a long discussion around it on Realm#1163 and Carthage#188 which ended in special workaround:

Carthage has special code: CopyFrameworks and corresponding piece of documentation:

This script works around an App Store submission bug triggered by universal binaries.

Realm has special script: strip-frameworks.sh and corresponding piece of documentation:

This step is required to work around an App Store submission bug when archiving universal binaries.

Also there is good article: Stripping Unwanted Architectures From Dynamic Libraries In Xcode.

I myself used Realm's strip-frameworks.sh which worked for me perfectly without any modifications though of course anyone is free to write a one from scratch.

The link to my topic which I recommend to read because it contains another aspect of this question: code signing - Creating iOS/OSX Frameworks: is it necessary to codesign them before distributing to other developers?

This is not so clear solution, but there is only way, that I find:

For project, that not in Workspaces:

You can also try to use this gist as described here. But it seems, that it not works for projects in workspaces.

This way I don't have use lipo to create a fat framework neither the Realm's strip-frameworks.sh to remove the unnecessary slices when submitting to the App Store.

basically for this i found very good solution. you just need to follow these simple steps.

My Answer cover the below points:

Step 3: Now select your framework target and for that Under "Build Phases" select "Add Run Script" and copy the below script code)

Step4: Now finally, build again and your framework is ready for both simulator and device compatibility. Hurray!!!!

[Note: We must have both compatible framework ready before final step4 (simulator and device architecture compatible, if not please follow above steps 1 and 2 correctly) 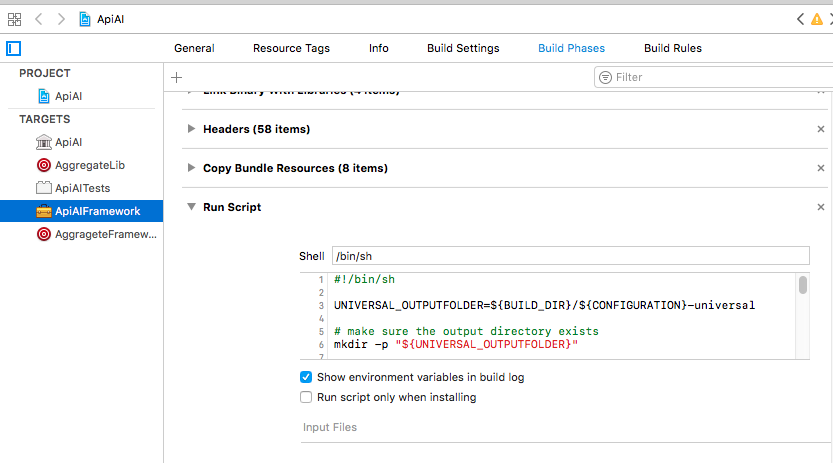 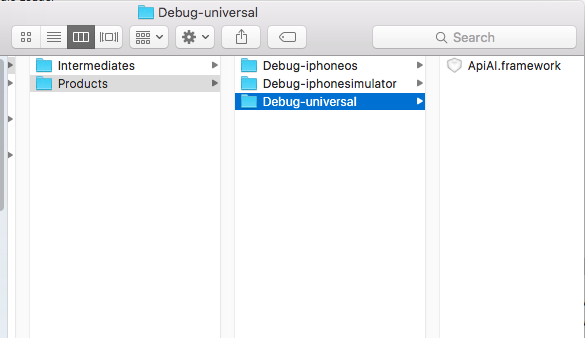 Put below code into shell area:

I just want to update this great answer by @odm. Since Xcode 10, the CURRENT_ARCH variable doesn't reflect the build architecture anymore. So I changed the script to check the platform instead:

I also added a line to clear the target directory before copying, because I noticed that additional files in subdirectories wouldn't be overwritten otherwise.

Not the answer you're looking for? Browse other questions tagged ios xcode cocoa-touch frameworks ios-universal-framework or ask your own question.

50
Xcode 6 iOS Creating a Cocoa Touch Framework - Architectures issues
96
Creating iOS/OSX Frameworks: is it necessary to codesign them before distributing to other developers?
42
Xcode 9 App installation failed, Could not write to the device
11
How to build Cocoa Touch Framework for i386 and x86_64 architecture?
7
Build on device fails with exit code 1
3
Custom Swift framework not exposing classes
3
confused about different procedures for creating a fat static library in Xcode 6
3
Swift framework into Objective-C device and simulator architectures
2
Using a third party framework into a AppStore app pulls in the iPhoneSimulator bits
1
Framework can only work on simulator, but not device
See more linked questions