I've got a MongoDB database that was once large (>3GB). Since then, documents have been deleted and I was expecting the size of the database files to decrease accordingly.

But since MongoDB keeps allocated space, the files are still large.

I read here and there that the admin command mongod --repair is used to free the unused space, but I don't have enough space on the disk to run this command.

Do you know a way I can freed up unused space?

UPDATE: with the compact command and WiredTiger it looks like the extra disk space will actually be released to the OS.

UPDATE: as of v1.9+ there is a compact command.

This command will perform a compaction "in-line". It will still need some extra space, but not as much.

MongoDB compresses the files by:

You can do this "compression" by running mongod --repair or by connecting directly and running db.repairDatabase().

In either case you need the space somewhere to copy the files. Now I don't know why you don't have enough space to perform a compress, however, you do have some options if you have another computer with more space.

There is not currently a good way to "compact in place" using Mongo. And Mongo can definitely suck up a lot of space.

The best strategy right now for compaction is to run a Master-Slave setup. You can then compact the Slave, let it catch up and switch them over. I know still a little hairy. Maybe the Mongo team will come up with better in place compaction, but I don't think it's high on their list. Drive space is currently assumed to be cheap (and it usually is).

It looks like Mongo v1.9+ has support for the compact in place!

"Unlike repairDatabase, the compact command does not require double disk space to do its work. It does require a small amount of additional space while working. Additionally, compact is faster."

I had the same problem, and solved by simply doing this at the command line:

Compact all collections in current database

If you need to run a full repair, use the repairpath option. Point it to a disk with more available space.

For example, on my Mac I've used:

Update: Per MongoDB Core Server Ticket 4266, you may need to add --nojournal to avoid an error:

Starting with 2.8 version of Mongo, you can use compression. You will have 3 levels of compression with WiredTiger engine, mmap (which is default in 2.6 does not provide compression):

Here is an example of how much space will you be able to save for 16 GB of data: 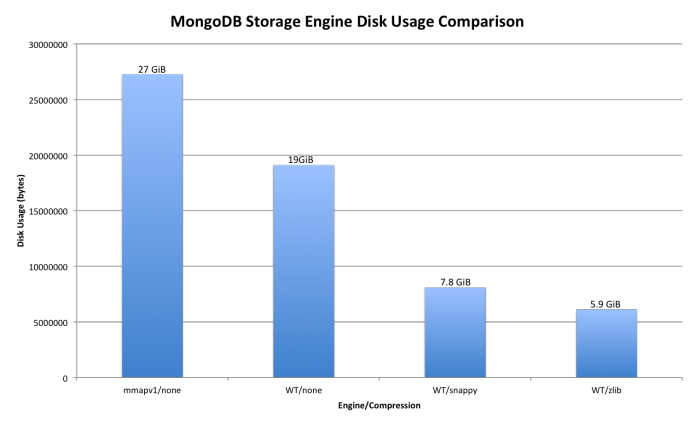 data is taken from this article.

We need solve 2 ways, based on StorageEngine.

NOTE: repairDatabase requires free disk space equal to the size of your current data set plus 2 gigabytes. If the volume that holds dbpath lacks sufficient space, you can mount a separate volume and use that for the repair. When mounting a separate volume for repairDatabase you must run repairDatabase from the command line and use the --repairpath switch to specify the folder in which to store temporary repair files. eg: Imagine DB size is 120 GB means, (120*2)+2 = 242 GB Hard Disk space required.

another way you do collection wise, command: db.runCommand({compact: 'collectionName'})

There has been some considerable confusion over space reclamation in MongoDB, and some recommended practice are downright dangerous to do in certain deployment types. More details below:

TL;DR repairDatabase attempts to salvage data from a standalone MongoDB deployments that is trying to recover from a disk corruption. If it recovers space, it is purely a side effect. Recovering space should never be the primary consideration of running repairDatabase.

Recover space in a standalone node

WiredTiger: For a standalone node with WiredTiger, running compact will release space to the OS, with one caveat: The compact command on WiredTiger on MongoDB 3.0.x was affected by this bug: SERVER-21833 which was fixed in MongoDB 3.2.3. Prior to this version, compact on WiredTiger could silently fail.

MMAPv1: Due to the way MMAPv1 works, there is no safe and supported method to recover space using the MMAPv1 storage engine. compact in MMAPv1 will defragment the data files, potentially making more space available for new documents, but it will not release space back to the OS.

You may be able to run repairDatabase if you fully understand the consequences of this potentially dangerous command (see below), since repairDatabase essentially rewrites the whole database by discarding corrupt documents. As a side effect, this will create new MMAPv1 data files without any fragmentation on it and release space back to the OS.

For a less adventurous method, running mongodump and mongorestore may be possible as well in an MMAPv1 deployment, subject to the size of your deployment.

Recover space in a replica set

For replica set configurations, the best and the safest method to recover space is to perform an initial sync, for both WiredTiger and MMAPv1.

Please note that the feasibility of doing a rolling initial sync also depends on the size of your deployment. For extremely large deployments, it may not be feasible to do an initial sync, and thus your options are somewhat more limited. If WiredTiger is used, you may be able to take one secondary out of the set, start it as a standalone, run compact on it, and rejoin it to the set.

Please don't run repairDatabase on replica set nodes. This is very dangerous, as mentioned in the repairDatabase page and described in more details below.

The name repairDatabase is a bit misleading, since the command doesn't attempt to repair anything. The command was intended to be used when there's disk corruption on a standalone node, which could lead to corrupt documents.

The repairDatabase command could be more accurately described as "salvage database". That is, it recreates the databases by discarding corrupt documents in an attempt to get the database into a state where you can start it and salvage intact document from it.

Consequences of repairDatabase on a replica set

Predictably, this makes that node contains a different dataset from the rest of the set. If an update happens to hit that single document, the whole set could crash.

To make matters worse, it is entirely possible that this situation could stay dormant for a long time, only to strike suddenly with no apparent reason.

In case a large chunk of data is deleted from a collection and the collection never uses the deleted space for new documents, this space needs to be returned to the operating system so that it can be used by other databases or collections. You will need to run a compact or repair operation in order to defragment the disk space and regain the usable free space.

Behavior of compaction process is dependent on MongoDB engine as follows

Compaction operation defragments data files & indexes. However, it does not release space to the operating system. The operation is still useful to defragment and create more contiguous space for reuse by MongoDB. However, it is of no use though when the free disk space is very low.

An additional disk space up to 2GB is required during the compaction operation.

A database level lock is held during the compaction operation.

The compact process releases the free space to the operating system. Minimal disk space is required to run the compact operation. WiredTiger also blocks all operations on the database as it needs database level lock.

For MMAPv1 engine, compact doest not return the space to operating system. You require to run repair operation to release the unused space.

Mongodb 3.0 and higher has a new storage engine - WiredTiger. In my case switching engine reduced disk usage from 100 Gb to 25Gb.

Database files cannot be reduced in size. While "repairing" database, it is only possible for mongo server to delete some of its files. If large amount of data has been deleted, mongo server will "release" (delete), during repair, some of its existing files.

In general compact is preferable to repairDatabase. But one advantage of repair over compact is you can issue repair to the whole cluster. compact you have to log into each shard, which is kind of annoying.

When i had the same problem, i stoped my mongo server and started it again with command

For standalone mode you could use compact or repair,

my conclusion is, the best way to reduce the size of sharded/replica set is by doing resync member, switch primary secondary, and resync again.

mongoDB -repair is not recommended in case of sharded cluster.

If using replica set sharded cluster, use compact command, it will rewrites and defragments all data and index files of all collections. syntax:

Just one way that I was able to do it. No guarantee on the safety of your existing data. Try with your own risk.

For example, with ubuntu (default path to data: /var/lib/mongodb), I had couple files with name like: collection.#. I keep the collection.0 and deleted all others.

Seems an easier way if you don't have serious data in database.