I'm trying to implement textures for spheres in my ray tracer. I managed to get something working, but I am unsure about its correctness. Below is the code for getting the texture coordinates. For now, the texture is random and is generated at runtime.

This is how the spheres look now: 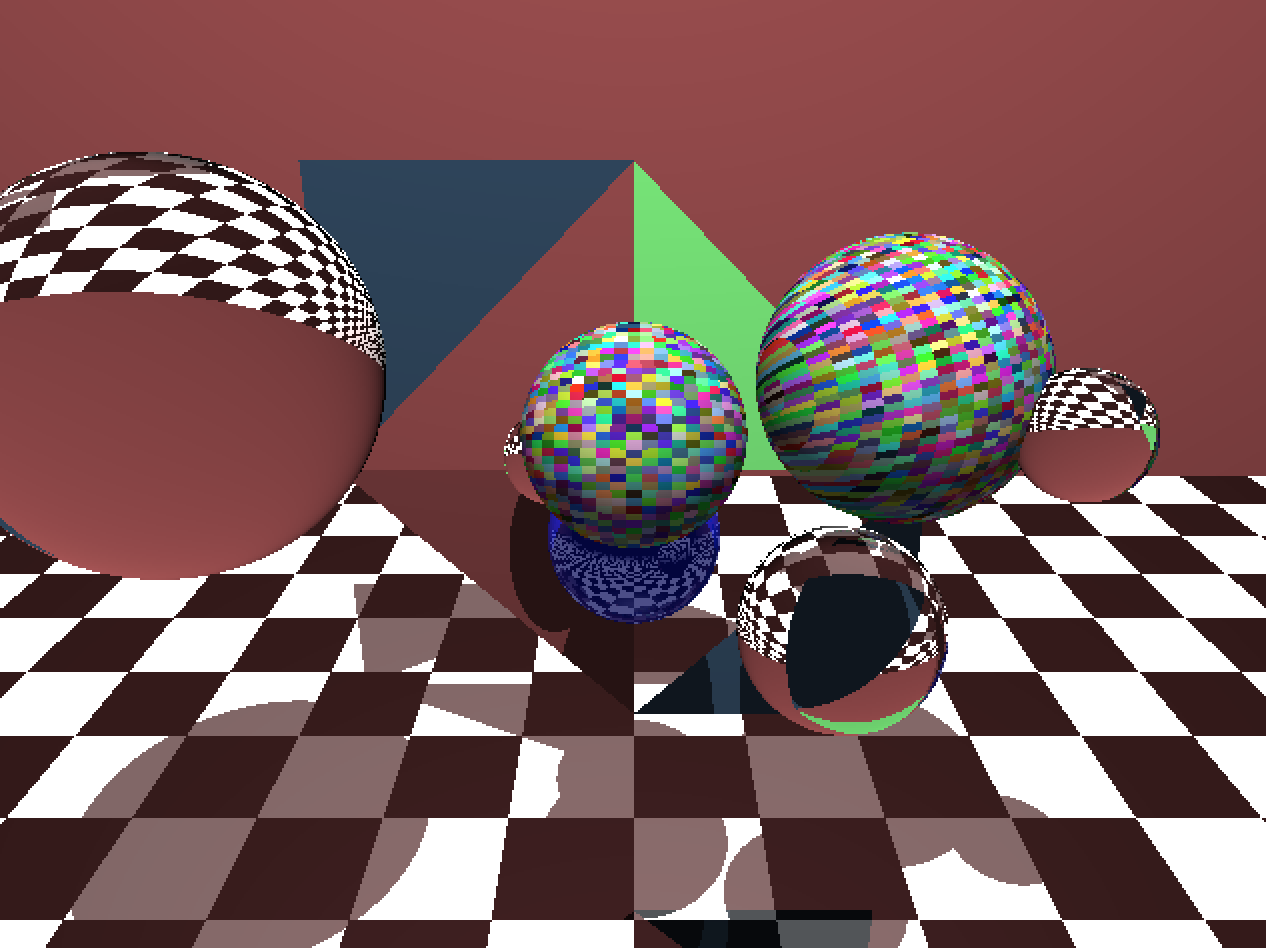 I had to normalize the coordinates of the hit point to get the spheres to look like that. Otherwise they would look like: 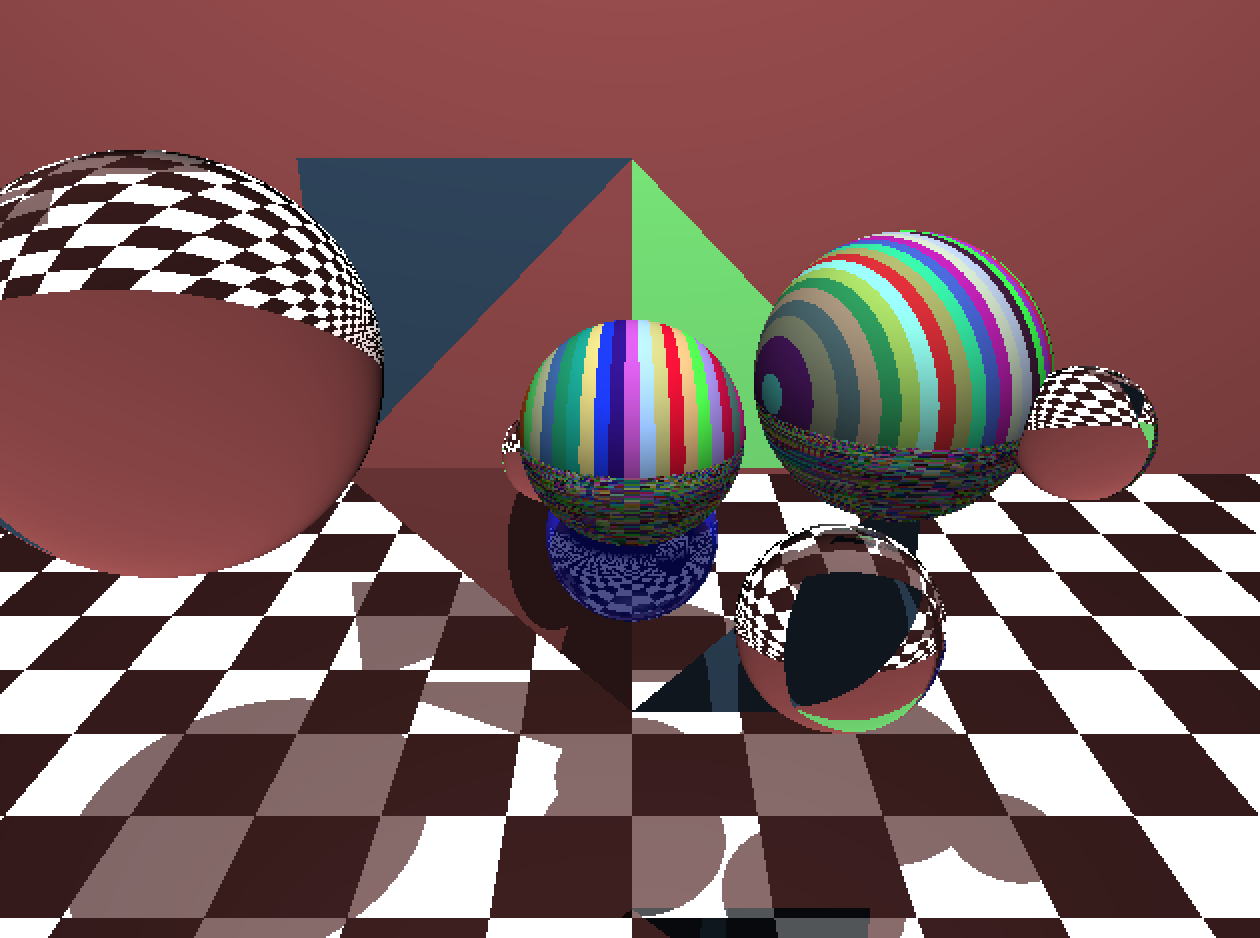 Was normalising the hit point coordinates the right approach, or is something else broken in my code? Thank you!

Instead of normalising the hit point, I tried translating it to the world origin (as if the sphere center was there) and obtained the following result: 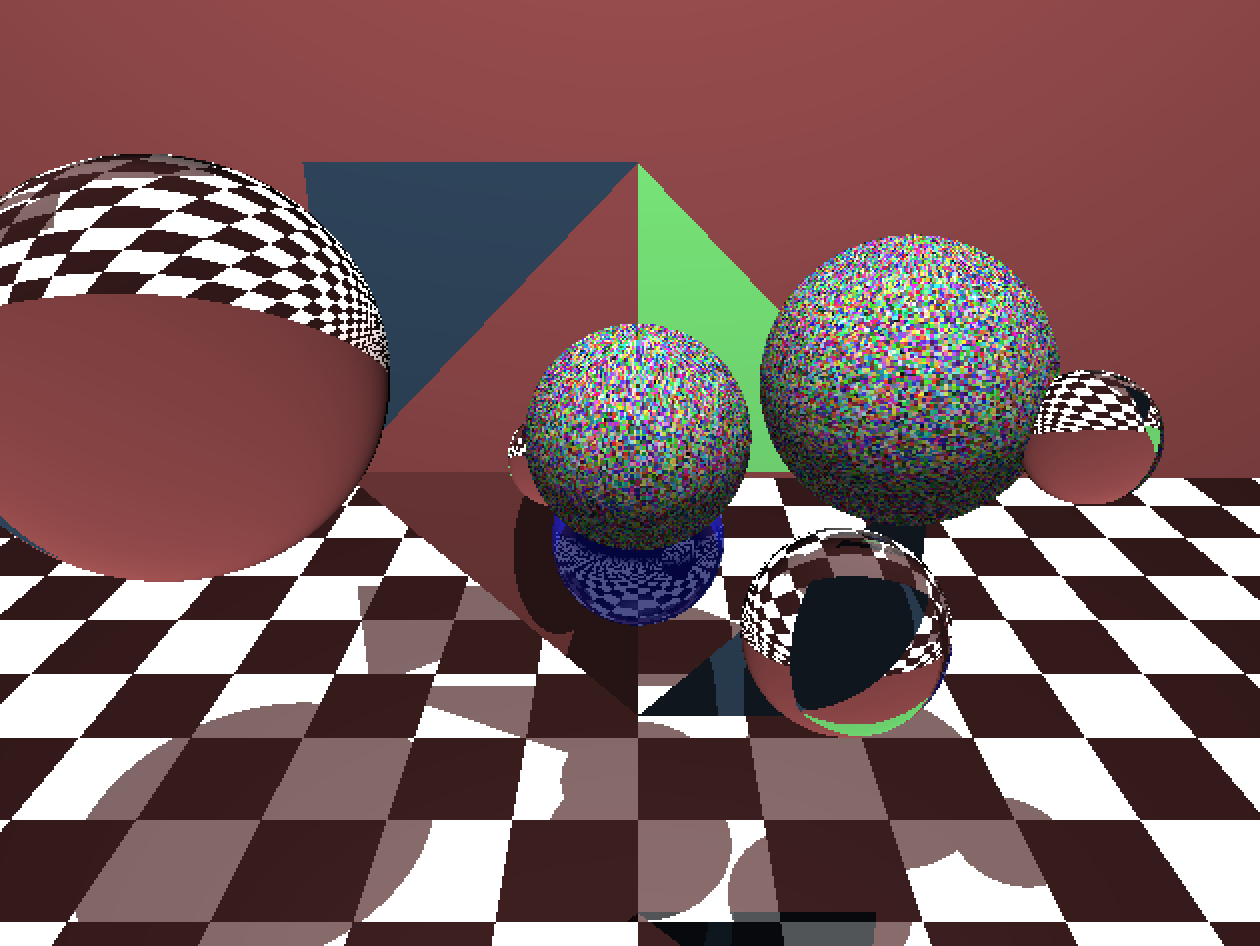 It's unclear what you mean by "normalizing" the hit point since there's nothing that normalizes it in the code you posted, but you mentioned that your hit point is in world space.

Also, you didn't say what texture mapping you're trying to implement, but I assume you want your U and V texture coordinates to represent latitude and longitude on the sphere's surface.

Your first problem is that converting Cartesian to spherical coordinates requires that the sphere is centered at the origin in the Cartesian space, which isn't true in world space. If the hit point is in world space, you have to subtract the sphere's world-space center point to get the effective hit point in local coordinates. (You figured this part out already and updated the question with a new image.)

Your second problem is that the way you're calculating theta requires that the the sphere have a radius of 1, which isn't true even after you move the sphere's center to the origin. Remember your trigonometry: the argument to acos is the ratio of a triangle's side to its hypotenuse, and is always in the range (-1, +1). In this case your Y-coordinate is the side, and the sphere's radius is the hypotenuse. So you have to divide by the sphere's radius when calling acos. It's also a good idea to clamp the value to the (-1, +1) range in case floating-point rounding error puts it slightly outside.

Right now your sphere intersection and texture-coordinate functions are operating in world space, but you'll probably find it useful later to implement transformation matrices, which let you transform things from one coordinate space to another. Then you can change your sphere functions to operate in a local coordinate space where the center is the origin and the radius is 1, and give each object an associated transformation matrix that maps the local coordinate space to the world coordinate space. This will simplify your ray/sphere intersection code, and let you remove the origin subtraction and radius division from GetTextureCoord (since they're always (0, 0, 0) and 1 respectively).

Not the answer you're looking for? Browse other questions tagged c++ raytracing or ask your own question.

1870
Why can templates only be implemented in the header file?
1
Flipping the 2D texture on a sphere with Ray-Tracing
0
Texture mapping in a ray tracing for sphere in C++
2
Implementing soft shadows in a ray tracer
0
Spherical mapping calculation (UV) for point given on sphere - strange U values
1
Java: Ray Tracing: Glossy reflection coloring
4
OpenGL: Mapping texture on a sphere using spherical coordinates