Please tell me a real time situation to compare String, StringBuffer, and StringBuilder?

String is immutable, if you try to alter their values, another object gets created, whereas StringBuffer and StringBuilder are mutable so they can change their values.

String is an immutable class, it can't be changed. StringBuilder is a mutable class that can be appended to, characters replaced or removed and ultimately converted to a String StringBuffer is the original synchronized version of StringBuilder

You should prefer StringBuilder in all cases where you have only a single thread accessing your object.

Also note that StringBuilder/Buffers aren't magic, they just use an Array as a backing object and that Array has to be re-allocated when ever it gets full. Be sure and create your StringBuilder/Buffer objects large enough originally where they don't have to be constantly re-sized every time .append() gets called.

The re-sizing can get very degenerate. It basically re-sizes the backing Array to 2 times its current size every time it needs to be expanded. This can result in large amounts of RAM getting allocated and not used when StringBuilder/Buffer classes start to grow large.

In Java String x = "A" + "B"; uses a StringBuilder behind the scenes. So for simple cases there is no benefit of declaring your own. But if you are building String objects that are large, say less than 4k, then declaring StringBuilder sb = StringBuilder(4096); is much more efficient than concatenation or using the default constructor which is only 16 characters. If your String is going to be less than 10k then initialize it with the constructor to 10k to be safe. But if it is initialize to 10k then you write 1 character more than 10k, it will get re-allocated and copied to a 20k array. So initializing high is better than to low.

This is from the JDK 6 Source code for AbstractStringBuilder

A best practice is to initialize the StringBuilder/Buffer a little bit larger than you think you are going to need if you don't know right off hand how big the String will be but you can guess. One allocation of slightly more memory than you need is going to be better than lots of re-allocations and copies.

Also beware of initializing a StringBuilder/Buffer with a String as that will only allocated the size of the String + 16 characters, which in most cases will just start the degenerate re-allocation and copy cycle that you are trying to avoid. The following is straight from the Java 6 source code.

If you by chance do end up with an instance of StringBuilder/Buffer that you didn't create and can't control the constructor that is called, there is a way to avoid the degenerate re-allocate and copy behavior. Call .ensureCapacity() with the size you want to ensure your resulting String will fit into.

Just as a note, if you are doing really heavy String building and manipulation, there is a much more performance oriented alternative called Ropes.

Another alternative, is to create a StringList implemenation by sub-classing ArrayList<String>, and adding counters to track the number of characters on every .append() and other mutation operations of the list, then override .toString() to create a StringBuilder of the exact size you need and loop through the list and build the output, you can even make that StringBuilder an instance variable and 'cache' the results of .toString() and only have to re-generate it when something changes.

Also don't forget about String.format() when building fixed formatted output, which can be optimized by the compiler as they make it better.

Do you mean, for concatenation?

Real world example: You want to create a new string out of many others.

For instance to send a message:

StringBuffer ( the syntax is exactly as with StringBuilder, the effects differ )

The former is synchonized and later is not.

So, if you invoke it several times in a single thread ( which is 90% of the cases ), StringBuilder will run much faster because it won't stop to see if it owns the thread lock.

So, it is recommendable to use StringBuilder ( unless of course you have more than one thread accessing to it at the same time, which is rare )

String concatenation ( using the + operator ) may be optimized by the compiler to use StringBuilder underneath, so, it not longer something to worry about, in the elder days of Java, this was something that everyone says should be avoided at all cost, because every concatenation created a new String object. Modern compilers don't do this anymore, but still it is a good practice to use StringBuilder instead just in case you use an "old" compiler.

Just for who is curious, this is what the compiler does for this class:

Lines numbered 5 - 27 are for the String named "literal"

Lines numbered 31-53 are for the String named "builder"

Ther's no difference, exactly the same code is executed for both strings. 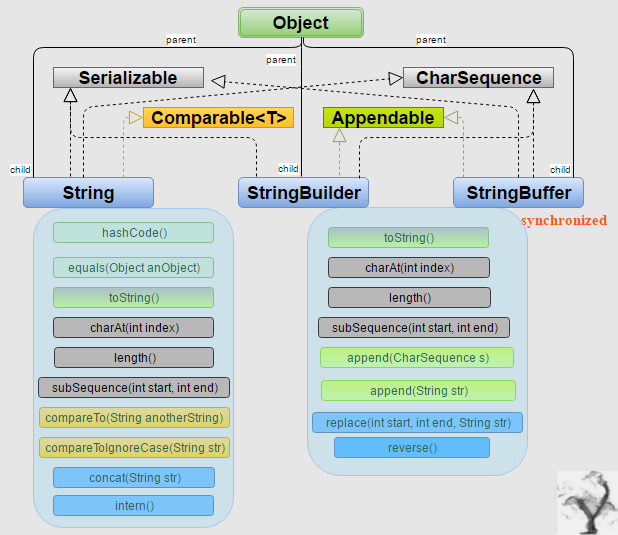 The String class represents character strings. All string literals in Java program, such as "abc" are implemented as instances of this class.

String objects are immutable once they are created we can't change. (Strings are constants)

StringBuilder and StringBuffer are mutable sequence of characters. That means one can change the value of these object's. StringBuffer has the same methods as the StringBuilder, but each method in StringBuffer is synchronized so it is thread safe.

When to use which one.

Also, StringBuffer is thread-safe, which StringBuilder is not.

So in a real-time situation when different threads are accessing it, StringBuilder could have an undeterministic result.

Note that if you are using Java 5 or newer, you should use StringBuilder instead of StringBuffer. From the API documentation:

As of release JDK 5, this class has been supplemented with an equivalent class designed for use by a single thread, StringBuilder. The StringBuilder class should generally be used in preference to this one, as it supports all of the same operations but it is faster, as it performs no synchronization.

In practice, you will almost never use this from multiple threads at the same time, so the synchronization that StringBuffer does is almost always unnecessary overhead.

Personally, I don't think there is any real world use for StringBuffer. When would I ever want to communicate between multiple threads by manipulating a character sequence? That doesn't sound useful at all, but maybe I have yet to see the light :)

But why we have two classes for same purpose?

For complete Details you can read http://www.codingeek.com/java/stringbuilder-and-stringbuffer-a-way-to-create-mutable-strings-in-java/

Not the answer you're looking for? Browse other questions tagged java string oop stringbuilder or ask your own question.