Few questions were asked before on comparisons between bsxfun and repmat for performance.

With this post, I am trying to investigate the performance numbers between bsxfun and repmat to cover all the bsxfun built-ins to sort of give it a wider perspective as both of these present good vectorized solutions.

The debate on whether bsxfun is better than repmat or vice versa has been going on like forever. In this post, we would try to compare how the different built-ins that ship with MATLAB fight it out against repmat equivalents in terms of their runtime performances and hopefully draw some meaningful conclusions out of them.

Getting to know BSXFUN built-ins

If the official documentation is pulled out from the MATLAB environment or through the Mathworks website, one can see the complete list of built-in functions supported by bsxfun. That list has functions for floating point, relational and logical operations.

On MATLAB 2015A, the supported element-wise floating point operations are :

The second set consists of element-wise relational operations and those are :

The third and final set comprises of logical operations as listed here :

Please note that we have excluded two built-ins @max (maximum) and @min (minimum) from our comparison tests, as there could be many ways one can implement their repmat equivalents.

To truly compare the performances between repmat and bsxfun, we need to make sure that the timings only need to cover the operations intended. Thus, something like bsxfun(@minus,A,mean(A)) won't be ideal, as it has to calculate mean(A) inside that bsxfun call, however insignificant that timing might be. Instead, we can use another input B of the same size as mean(A).

Thus, we can use: A = rand(m,n) & B = rand(1,n), where m and n are the size parameters which we could vary and study the performances based upon them. This is exactly done in our benchmarking tests listed in the next section.

Finally, we are at the crux of this post to watch these two guys fight it out. We have segregated the benchmarking into three sets, one for the floating point operations, another for the relational and the third one for the logical operations. We have extended the comparison model as discussed earlier to all these operations.

Please note that for this specific set, the input data, A and B needed were logical arrays. So, we had to do these edits in the earlier benchmarking code to create logical arrays -

The benchmarking codes were run on this system configuration:

The speedups thus obtained with bsxfun over repmat after running the benchmark tests were plotted for the three sets as shown next.

Few observations could be drawn from the speedup plot:

Based on the above plot, one could see that barring one-off cases with @hypot and @mod, bsxfun still performs roughly 10% better than repmat for these 7 operations.

This is the second set of benchmarking for the next 6 built-in relational operations supported by bsxfun. 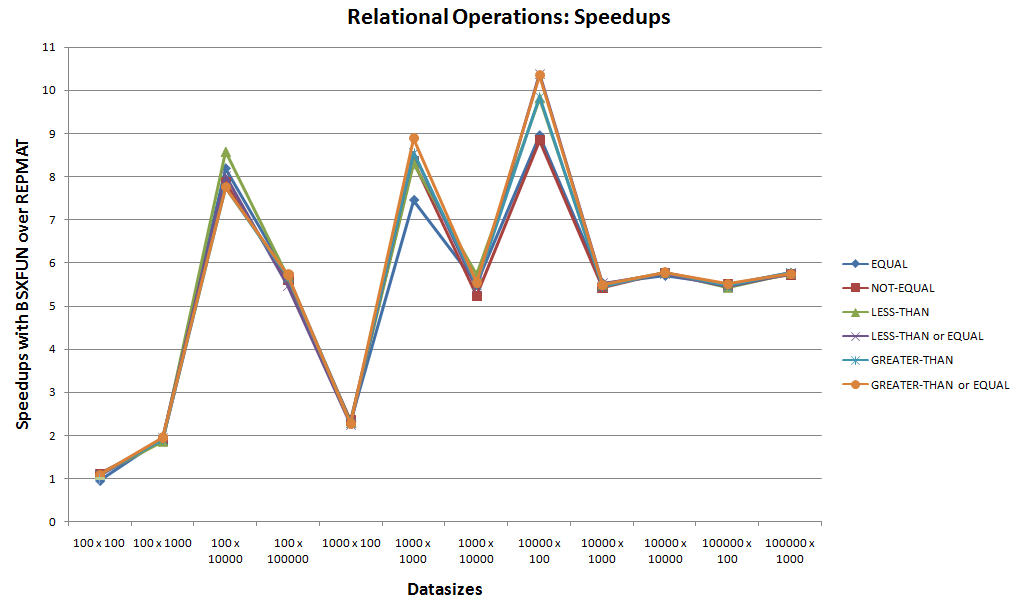 Looking at the speedup plot above, neglecting the starting case that had comparable runtimes between bsxfun and repmat, one can easily see bsxfun winning for these relational operations. With speedups touching 10x, bsxfun would always be preferable for these cases.

This is the third set of benchmarking for the remaining 3 built-in logical operations supported by bsxfun. 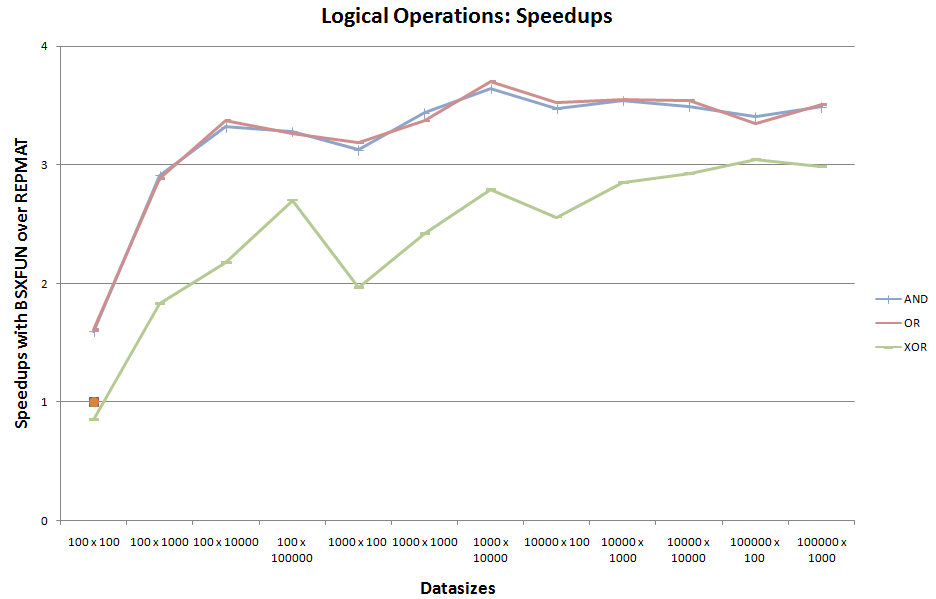 Neglecting the one-off comparable runtime case for @xor at the start, bsxfun seems to have an upper hand for this set of logical operations too.

Not the answer you're looking for? Browse other questions tagged performance matlab benchmarking vectorization bsxfun or ask your own question.

133
In Matlab, when is it optimal to use bsxfun?
21
Matlab - bsxfun no longer faster than repmat?
0
Replicating a vector while summing an increasing value
6
Create strings from the indices of two vectors in Matlab
6
Efficiently calculating weighted distance in MATLAB
3
Fastest way of finding repeated values in different cell arrays of different size
4
Concatenate subcells through one dimension of a cell array without using loops in MATLAB
4
Disable MATLAB's implicit expansion
3
Matlab: create matrix whose rows are identical vector. Use repmat() or multiply by ones()
6
BSXFUN on memory efficiency with relational operations
see more linked questions…

526
Comparing two byte arrays in .NET
133
In Matlab, when is it optimal to use bsxfun?
51
Is indexing vectors in MATLAB inefficient?
921
Swift Beta performance: sorting arrays
3
replace repmat with bsxfun in MATLAB
4
Matlab bsxfun - Why does bsxfun fail to work in this case?
21
Matlab - bsxfun no longer faster than repmat?
8
Matlab's bsxfun() - what explains the performance differences when expanding along different dimensions?
23
How much faster is implicit expansion compared with bsxfun?
2
Optimizing code which uses repmat and bsxfun