2PL, Rigorous vs Strict Model, Is there any benefit?

In 2PL (two phase locking), what advantage(s) does the rigorous model have over the strict model?

I) There is no advantage over the strict model.

II) In contrast to the strict model, it guarantees that starvation cannot occur.

III) In contrast to the strict model, it guarantees that deadlock cannot occur.

IV) In contrast to the strict model, there is no need to predict data needed in the future.

My note says all of the above are false. I am a bit confused. Can someone clarify for me why all of this is false?

What is Two-Phase Locking (2PL) Protocol ?

Now, what is Strict phase locking ?

Here a transaction must hold all its exclusive locks till it commits/aborts.

Rigorous two-phase locking is even stricter: here all locks are held till commit/abort. In this protocol transactions can be serialized in the order in which they commit.

Same as 2PL but Hold all exclusive locks until the transaction has already successfully committed or aborted. –It guarantees cascadeless recoverability 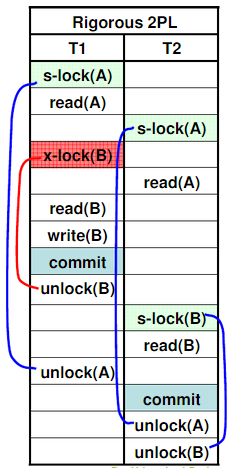 Same as Strict 2PL but Hold all locks until the transaction has already successfully committed or aborted. –It is used in dynamic environments where data access patterns are not known before hand.

There is no deadlock. Also, a younger transaction requesting an item held by an older transaction is aborted and restart with the same timestamp, starvation is avoided.

I hope that above clear explanations with diagram must have made you clear about the concept and advantages of rigorous over the other.

I - there is an advantage

Look at this lecture note from UCLA:

Rigorous two-phase locking has the advantages of strict 2PL. In addition it has the property that for two conflicting transactions, their commit order is their serializability order. In some systems users might expect this behavior.

These lecture notes have an example (the model in the example is strict - not rigorous):

Consider two transactions conducted at the same site in which a long running transaction T1 which reads x is ordered before a short transaction T2 that writes x. T2 returns first, showing an update version of x long before T1 completes based on the old version.

II and III - does not affect deadlocks/starvation

Is rigorous or strict more used/preferred?

Which of those two models to use would depend on the situation. Modern DBMS use more complex concurrency handling than simple rigorous or strict 2PL. Having said that judging by the Wikipedia article on two-phase locking the rigorous (SS2PL) model is more widely used:

SS2PL [rigorous] has been the concurrency control protocol of choice for most database systems and utilized since their early days in the 1970s. [...]

2PL in its general form, as well as when combined with Strictness, i.e., Strict 2PL (S2PL), are not known to be utilized in practice. The popular SS2PL does not require marking "end of phase-1" as 2PL and S2PL do, and thus is simpler to implement. Also, unlike the general 2PL, SS2PL provides, as mentioned above, the useful Strictness and Commitment ordering properties. [...]

SS2PL Vs. S2PL: Both provide Serializability and Strictness. Since S2PL is a super class of SS2PL it may, in principle, provide more concurrency. However, no concurrency advantage is typically practically noticed (exactly same locking exists for both, with practically not much earlier lock release for S2PL), and the overhead of dealing with an end-of-phase-1 mechanism in S2PL, separate from transaction-end, is not justified. Also, while SS2PL provides Commitment ordering, S2PL does not. This explains the preference of SS2PL over S2PL. [...]

Transaction T2 in the above example does not follow 2PL and S2PL as a lock request (lock B) is done after the lock release unlock(A) - hence violating the protocol.

So the fourth option is the correct one.

0
Why we need Rigorous 2PL since we have Strict 2PL?