I am looking for a way to "fill" three-dimensional geometry with color, and quite possibly a texture at some time later on.

Suppose for a moment that you could physically phase your head into a concrete wall, logically you would see only darkness. In OpenGL, however, when you do this the world is naturally hollow and transparent due to culling and because of how the geometry is drawn. I want to simulate the darkness/color/texture within it instead.

I know some games do this by overlaying a texture/color directly over the hud--therefore blinding the player.

Is there another way to do this, though? Suppose the player is standing half in water; they can partially see below the waves. How would you fill it to prevent them from being able to see clearly below what is now half of their screen?

What is this concept even called?

A problem with the texture-in-front-of-the-camera method is a texture is 2D but you want to visualize a slice of a 3D volume. For the first thing you talk about, the head-inside-a-wall idea, I'll point you to "3D/volume texturing". For standing-half-in-water, you're after "volume rendering" with "absorption" (discussed by @user3670102).

The general idea here is you have some function that defines a colour everywhere in a 3D space, not just on a surface (as with regular texture mapping). This is nice because you can put geometry anywhere and colour it in the fragment shader based on the 3D position. Think of taking a slice through the volume and looking at the intersection colour.

For the head-in-a-wall effect you could draw a full screen polygon in front of the player (right on the near clipping plane, although you might want to push this forwards a bit so its not too small) and colour it based on a 3D function. Now it'll look properly solid and move ad the player does and not like you've cheaply stuck a texture over the screen. 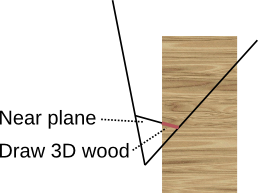 The actual function could be defined with a 3D texture but that's very memory intensive. Instead, you could look into either procedural 3D colour (a procedural wood or brick shader is pretty common as an example). Even assuming a 2D texture is "extruded" through the volume will work, or better yet weight 3 textures (one for each axis) based on the angle of the intersection/surface you're drawing on.

Detecting an intersection with the geometry and the near clipping plane is probably the hardest bit here. If I were you I'd look at tricks with the z-buffer and make sure to draw everything as solid non-self-intersecting geometry. A simple idea might be to draw back faces only after drawing everything with front faces. If you can see back faces that part of the near plane must be inside something. For these pixels you could calculate the near clipping plane position in world space and apply a 3D texture. Though I suspect there are faster ways than drawing everything twice.

In reality there would probably be no light getting to what you see and it should be black, but I guess just ignore this and render the colour directly, unlit.

This sounds way harder than it actually is. If you have some transparent solid that's all the one colour ("homogeneous") then it removes light the further light has to travel through it. Think of many alpha-transparent surfaces, take the limit and you have an exponential. The light remaining is close to 1/exp(dist) or exp(-dist). Google "Beer's Law". From here,

A great way to find distances through something is to render the back faces (or seabed/water floor) with additive blending using a shader that draws distance to a floating point texture. Then switch to subtractive blending and render all the front faces (or water surface). You're left with a texture containing distances/depth for the above equation.

Combining the two ideas, the material is both a transparent solid but the colour (and maybe density) varies throughout the volume. This starts to get pretty complicated if you have large amounts of data and want it to be fast. A straight forward way to render this is to numerically integrate a ray through the 3D texture (or procedural function, whatever you're using), at the same time applying the absorption function. A basic brute force Euler integration might start a ray for each pixel on the near plane, then march forwards at even distances. Over each step while you march you assume the colour remains constant and apply absorption, keeping track of how much light you have left. A quick google brings up this.

This seems related to looking through what's called "participating media". On the less extreme end, you'd have light fog, or smoky haze. In the middle could be, say, dirty water. And the extreme case would be your head-in-the-wall example.

Doing this in a physically accurate way isn't trivial, because the darkening effect is more pronounced when the thickness of the media is greater.

But you can fake this by making some assumptions and giving the interior geometry (under the water or inside the wall) darker by reduced lighting or using darker colors. If you care about the depth effect, look at OpenGL and fog.

For underwater, you can make the back side of the water a semi-transparent color that causes stuff above it to have a suitable change in color.

If you really want to go nuts with accuracy, look at Kajia's Rendering Equation. That covers everything (including stuff that glows), but generally needs simplification and approximations to be more useful.

Not the answer you're looking for? Browse other questions tagged opengl or ask your own question.